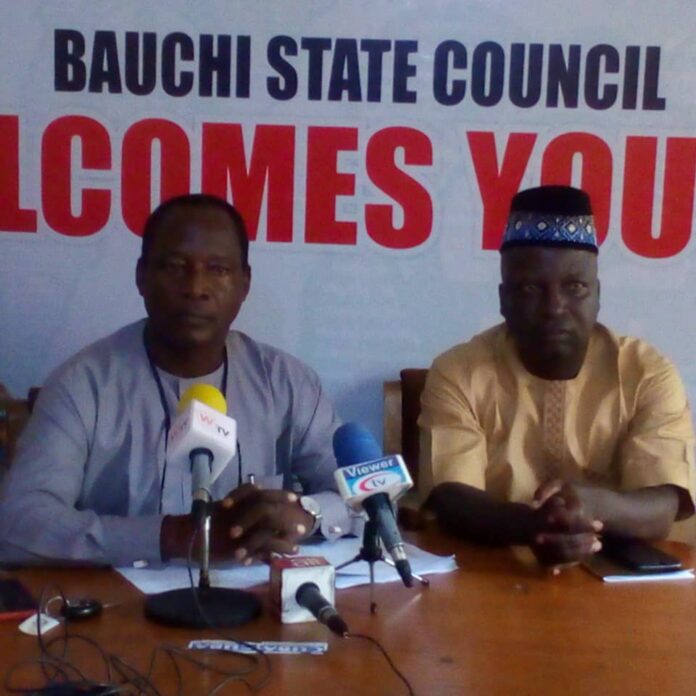 A coalition of minority ethnic groups in Bauchi State with
membership that cuts across the 20 Local Government Areas of the state, has unanimously pledged their votes in the 2023 General elections to former Vice President Atiku Abubakar, Peoples Democratic Party PDP presidential candidate and Governor Bala Mohammed of the State for a second term.

Addressing journalists at the Correspondents’ Chapel of the NUJ Secretariat on Sunday, leader of the group, Hon Samuel J. Haruna, disclosed that the minority ethnic groups met and unanimously endorsed Governor Mohammed at their recent meeting.

“With about three million
members, our membership cut across every strata of society – leaders of thought,
captains of industry, the academia, entrepreneurs, businessmen and women, and
youths, with notable personalities,” Haruna said.

“Governor Mohammed has performed well, far beyond expectations. He has done
in three and half years, what others could not do in eight years.

“In view of the
foregoing reasons, and several others too numerous to mention, we unanimously
adopt and endorse him for second term of four years.

“We therefore call on all sons and daughters of the state at home and abroad to join
hands with us to ensure the governor’s success in the forthcoming 2023 elections.
We want to commend him for the remarkable and exemplary way he has piloted the
affairs of our dear State and expressed gratitude to him for the monumental
infrastructural development evidenced in numerous road constructions across the
state.We also expressed full satisfaction with the prudent manner he has managed
merger resources of the state culminating in the prompt payment of salaries of civil
servants. We equally lauded him for his proactive approach and responsesto security
matters which is responsible for the peace and security of lives and prosperity being
enjoyed in the State as well as inclusive leadership style, which is “unprecedented”
in the history of the state, and we urge him to continue to sustain the good works.
We cannot but also appreciate him for always placing the interest of the state first
in every policy of his administration.
In conclusion, the foregoing and many more reasons formed the bedrock of our
decision together with the leadership of various minority tribes, to use this medium,
to pass our vote of confidence and endorsement on His Exellency Senator Bala
Abdulkadir Mohammad(CON), Kauran Bauchi and the Jagaba of Katagum for
another well-deserved term of four years. We call on all to desist from party politics
and to place the interest of the state above any other interest. Let all join hands with
the people’s Governor in restoring the lost glory of our dear state.