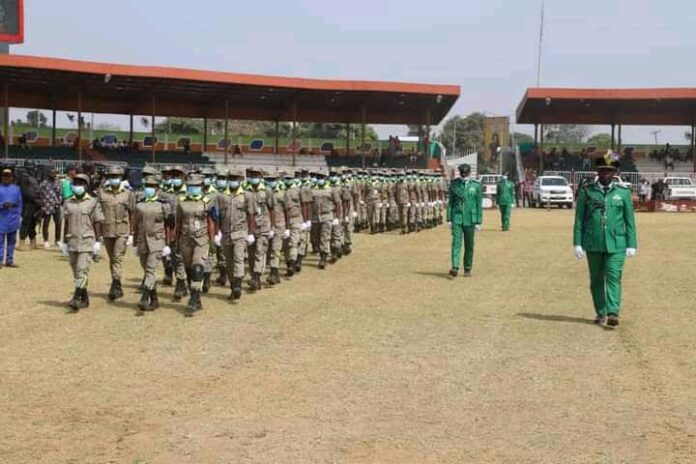 The government also claimed that the youths were killed by operatives of Department of State Services, and not Ebubeagu as claimed by the residents…

The killing of 14 youths at Otulu in Awo Omama, Oru East Local Government Area of Imo State by suspected operatives of Ebubeagu has been greeted with condemnations and a call for review of the operations of the security outfit established by the Imo State Government to fight crimes.

The youth were said to be going home on their bikes after a wedding ceremony when some members of the Ebubeagu security outfit killed 14 of them.

The government maintained that those killed were members of Eastern Security Network (ESN), the paramilitary arm of the Indigenous People of Biafra (IPOB), which had been terrorizing the area for a long time, but relations of the victims have come up to identify them as their kith.

The government also claimed that the youths were killed by operatives of Department of State Services, and not Ebubeagu as claimed by the residents of the area.

Speaking on the incident, Imo State Commissioner for Information and Strategy, Declan Emelumba, said “We all know that security agents do not just descend on innocent people and murder them in cold blood. Being mindful of the fact that their primary responsibility is to protect the citizens, they only use force or deploy their weapons in extreme cases, especially when they are threatened or their lives are in danger.

“Exceptions can be made for isolated incidents of accidental discharge, or when a drunk officer or one with mental health problems goes berserk. Even in these circumstances, “14 innocent people” cannot just be slaughtered as if they were goats. It would even take a certain degree of callousness to shoot and kill 14 goats. Yet, that is the narrative that detractors and political opponents of the government of Imo state have been feeding the public since the unfortunate events of Sunday, July 17 when the Department of State Services (DSS) stormed the camp of members of Eastern Security Network (ESN) in Awo Omama resulting in the exchange of gunfire and the killing and arrest of some people.”

He said the DSS acted in response to an intelligence report that members of the outlawed and dreaded ESN were meeting at a certain camp in Awo Omama to strategize on how to enforce the “sit-at-home” order planned for Monday, July 18.

“A member of the ESN, Chinonso Mmerem, who had been in the custody of the DSS, led the secret police to the camp in a covert operation. According to Mmerem, who was later interviewed by journalists, when the ESN sighted the security agents, they opened fire on them, resulting in the exchange of fire between the two groups. At the end of it all, there were casualties and arrests. That is the fact,” he claimed.

The DSS has neither confirmed nor refuted the claim by the state government. Several phone calls and messages sent to the spokesman of the service, Peter Afunanya, were not responded to as at the time of filing this report.

However, one of the survivors of the tragic shooting, Nnamdi Nnanna, countered the narration of the state government.

The borehole driller, whose brother, Chijioke Nnanna, was the bridegroom at the traditional marriage, told newsmen that for the grace of God, he would have been killed during the unfortunate incident.

“As we sped, we got to a road bump and fell. They caught up with us and immediately shot the driver dead and shot the other person on his arm. I immediately started shouting, telling them that we were not criminals nor ESN people,” he narrated with tears filling his eyes.

The father of two said that he pleaded with the operatives to spare his life.

He said that as he lifted his head, he recognised one of the shooters as the person he had drilled a borehole in his house and pleaded for his life.

“It was this courageous effort that saved my life,” he added.

Speaking further on his escape, Nnamdi said he was tied and blindfolded by operatives of Ebubeagu, who took him to their camp.

“As they approached, I identified their leader and asked him not to kill me. One of them had already cocked his gun to shoot me but he ordered him to stop. I was bundled into their operational vehicle, tied and blindfolded.

“They took me to their camp at Omuma and locked me up. I kept telling them that I was not a criminal, that my immediate younger brother did his traditional wedding and we were returning home from Awo Omama. They then brought me out and asked me to take them to the venue of the traditional marriage.

“We went there and they equally took me to the compound of our traditional ruler and later brought me back to their camp where I spent the night,” he said.

He rubbished claims that the killers were operatives of the DSS, stressing that it was members of Ebubeagu that opened fire on them.

“The Department of State Services (DSS) was not involved. Those I saw were operatives of Ebubeagu. They didn’t even ask us anything but just started shooting directly at us.

“This incident happened around 5.30pm. There were two people each on three bikes, while we were three on the fourth. And without any warning, I saw my seven brothers shot dead within an instant and without provocation,” he said.

Narrating further, Nnamdi said that seven people from his sister-in-law’s community were also killed by the rampaging operatives.

“My problem now is how to live with the pain of losing my brothers and how to face their parents which will be a constant reminder.

“I want justice for my brothers but I appeal to them not to kill us anymore, they must stop this impunity,” Nnamdi cried.

‘A declaration of internal war, witch-hunt of political opponents’

The killings and other atrocities allegedly perpetrated by men of Ebubeagu have led to calls for the disbandment of the security outfit.

A Civil Society Organisation, Spaces for Change (S4C), said that the outfit has outlived its usefulness.

In a statement by its Executive Director, Victoria Ibezim-Ohaeri, S4C condemned the unlawful killing of unarmed citizens of Imo allegedly by operatives of Ebubeagu.

A Public Affairs Commentator, Mr Kene Obiezu, said that the atrocities of the security outfit are signals to what will happen in Imo during the 2023 election.

According to him, the spate of unlawful killings by men of Ebubeagu showed that they were on an evil mission to kill all Imo youths in the state.

He likened the scenario to what would happen if security is left in the hands of governors as they will use it against their opponents in the 2023 general election.

The Movement for the Actualisation of the Sovereign State of Biafra, MASSOB, in a statement issued by its leader, Uchenna Madu, described Ebubeagu as evil and an agent of death established by the Imo State Government.

While calling for its disbandment, he warned the Imo State governor that the activities of Ebubeagu would be seen as a declaration of internal war.

The statement read in part, “They are primarily established as a witch-hunting outfit to fight political enemies and pro-Biafra agitators who are non-violent.”

Some observers of the activities of the now-dreaded security outfit said that it was hurriedly put together without a clear definition of its operation in Imo State.

Although, there was no formal launching of the outfit in Imo, ironically, its operation has turned out to be a thorn in the flesh of residents of the state.

The presence of its operatives became noticeable from November 2021, following the atrocious activities of some elements of ESN/IPOB, especially in the Orlu axis. The atrocities attributed to ESN include the attack on the headquarters of the Owerri Custodial Centre and the Nigeria police, where over 500 inmates were released in April 2021. This was followed by a series of attacks, killings and beheading of innocent citizens, especially in the Orlu zone.

The burning of the houses of some government officials in Oru East and West local governments areas, especially that of the governor, exacerbated the clashes in Orlu that saw the heightened needs for the operations of Ebubeagu.

At the peak of the operation of the unknown gunmen in the state, the Orlu Sector commander of ESN, who was an ex-soldier, Chidera Nnabuihe, popularly known as “Dragon” was killed by policemen in a shootout at Amaifeke Valley in September 2021.

Our correspondent gathered that some people close to the government decided to hurriedly put the outfit together to checkmate the activities of ESN. But without defined roles and laws guiding their operations, these elements soon became law unto themselves, analysts feared.

However, Imo State Commissioner for Information and Strategy, Emelumba, told our correspondent that Ebubeagu is a product of the Imo Security Network and was set up to check the activities of unknown gunmen that have continued to hold the state to ransom.

He debunked the assertion that Ebubeagu was surreptitiously invited to Imo State, saying that the outfit is a creation of the law.

Emelumba said that it was the ISN that was transformed into a security outfit, code named Ebubeagu.

Daily Trust on Sunday recalled that former Governor Rochas Okorocha in 2012 set up the Imo Security Network. According to the law passed by the then House of Assembly, ISN is to complement the efforts of security agencies in tackling the rising insecurity in the state.

However, the law establishing the ISN was reviewed in 2021 by Governor Hope Uzodimma-led administration in response to the April 11’s decision of the South East governors to form a regional security outfit, Ebubeagu.

In Ebonyi State, there are about 3,000 operatives of the security outfit, who are armed with pump action guns. The monthly take home is N30, 000 for the junior staff with additional N10,000 as allowance which is for the purpose of fuelling their operational motorbike and buying of batteries for their torchlights.

The outfit, according to Governor Umahi was to further complement the efforts of the Nigeria Police and other security agencies in stamping out insecurity in the state.

“Ebubeagu is not there to fight any legal or illegal group but to assist the Police to rout out criminals, so that is their mandate,” Umahi said.

The members of Neighbourhood Watch which was earlier launched in the state were assimilated and absorbed into Ebubeagu security outfit.

Vigilantes to the rescue in Anambra

In Anambra State, just like in Enugu and Abia states, there is no formal inauguration of the Ebubeagu outfit. However, the former governor of the state, Chief Willie Obiano, inaugurated Anambra vigilantes to assist in the fight of crime in the state.

His successor, Prof. Charles Soludo, has kept mute over the formation of the regional security outfit, despite the security challenges in the state.

However, Daily Trust on Sunday discovered that most offices and shops in the state are manned by the vigilante groups, especially since the criminals started targeting the police and other security operatives.