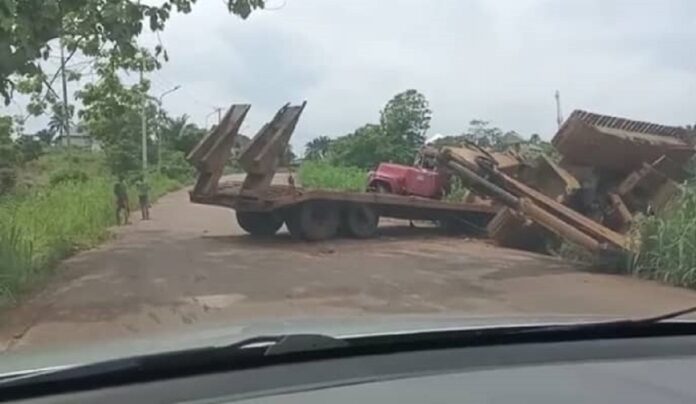 An urgent call has been made for the immediate removal of an obstruction along the Nibo—Isiagu Road in Awka Anambra State, to save motorists and other road users from untold hardship and possible danger.

According to her, the obstruction was caused by a supposedly spoilt truck belonging to JCC Construction Company.

This was corroborated by the eyewitness video, which shows the front side of the truck stuck in a bush, while the carrier section blocks a huge portion of the road, thereby making the road impassable by vehicles from either side.

Giving hint on the exact location of the obstruction, she said “…from Isiagu, approaching Amenyi; and from there you burst out to the likes of Eze-Uzu Junction in Awka, and others…”

The Facebook user, in a short note accompanying the video, also noted that the obstruction has forced motorists to now go through an internal road through Aguoye.

She also alleged that youths on a street on that alternative route have already set up a roadblock on that axis, and have started collecting toll from motorists making use of the road as the only alternative available to them.

The obstruction and its ill advantage and opportunity it created for these youths to feed on the motorists have indeed subjected the motorists to untold hardship and unwarranted spendings.

In a voiceover that accompanies the video, the Facebook user also highlighted other bad effects and outcomes that may result from the obstruction, including causing terrible accident for motorists or other road users who may unknowingly bump into it, especially at night.

She therefore called on the concerned authorities to act fast and urgently remove the obstruction to save motorists from untold hardship and avert any impending doom it may cause.

When contacted, the Ag. Sector Public Education Officer, Federal Road Safety Corps (FRSC), Anambra State Command, RC Margaret B. Onabe appreciated the Facebook user for such important information, and assured that the Command will visit the scene and remove the obstruction as fast as possible.

Attached is the link to the video: