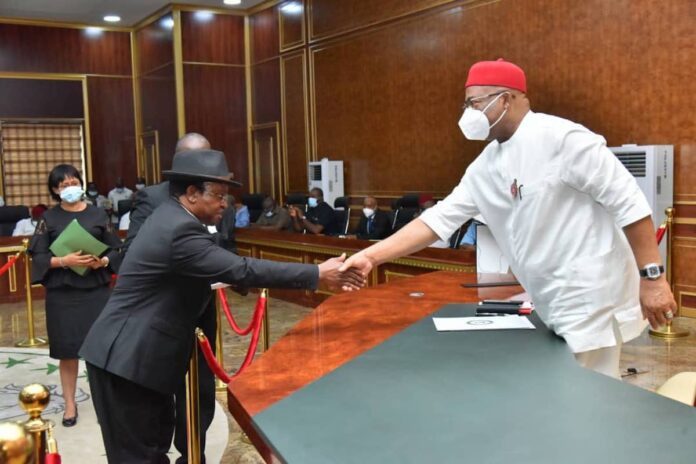 …urges him to live above board, respect rule of law

Addressing the Acting President, members of the Bar and the Bench, senior government officials and key traditional rulers at the New Executive Council Chambers, Government House Owerri at the ceremony, Friday, Governor Uzodimma congratulated Justice Okorie and informed him that his appointment was strictly on merit and in adherence to due process.

He charged Justice Okorie to discharge his duties in full compliance with the principles of due process and the rule of law upon which he was nominated and inaugurated.

Again, he reminded the audience that the Shared Prosperity Administration of his government is anchored on the respect for the rule of law and due process, insisting that he expects the Acting President of the Customary Court of Appeal to follow the same process.

He requested him to always bear the people in mind while dispensing justice, noting that “the people always look at the judiciary as the last hope of the common man.”

Governor Uzodimma further reminded Justice Okorie that his “appointment comes with a lot of responsibilities which expects him to live above board and show examples that will galvanize the Bench and the Bar to be always on their toes.”

He enjoined him to remember that “after God, it is only the judges that hold the authority to make pronouncements that could lead to life and death; hence such authorities must be delivered and or dispensed with the utmost fear of God.”

Governor Uzodimma added: “The judiciary ought to be always more than circumspect, be just, fair and firm.”

He emphasized that it is only by doing so that the common man will continue to see the judiciary as their last hope.

The Governor promised to provide the judiciary with the necessary tools that would assist the members in the dispensation of justice in Imo State.

In his response after the swearing-in, Justice Okorie thanked Governor Uzodimma for finding time despite his crowded schedule to inaugurate him as Acting President Customary Court of Appeal.

He promised to be guided, always, by the letters of the oaths of office he took in the discharge of his duties.

He also promised to work to improve on the already set standards by his predecessors in the State Customary Court of Appeal.

Present at the swearing-in were the Deputy Governor, Prof. Placid Njoku, the Chief of Staff to the Governor, Barr. Nnamdi Anyaehie, the Attorney General/Commissioner for Justice, Barr. C. O. C. Akaolisa and other members of State Expanded Executive Council.