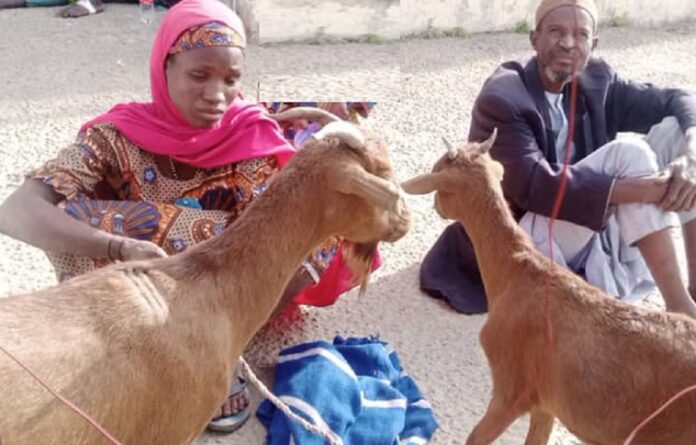 The Bauchi State Command of the Nigeria Security and Civil Defence Corps (NSCDC) has arrested a 35-year-old woman, Zainab Malam Barks, of Madara district of Katagum Local Government Area of the State, and a 50-year-old man, known as Usman Abubakar, for allegedly stealing goats.

The state Public Relation Officer, of the Command Garkuwa Y. Adamu stated thus today when he paraded the suspects alongside others arrested, said that Zainab with the help of Usman Abubakar specializes in stealing goats.

PRO, said preliminary investigations revealed that she stole 22 goats in two batches with the first batch of 8 goats stolen on 23/12/2021 and taken to Hardawa market where she sold them at the rate of N77,000.

“After a week, she went back to the same location and stole 14 goats which she took to Misau market for sale as usual, but luck ran out on her as she was arrested by NSCDC personnel attached to Misau Division. The suspects will be charged to court immediately after investigations.

The PRO also said that the Command under the leadership of Commandant Nuraddeen Abdullahi successfully arrested some suspected political thugs popularly known as (Sara-suka) for acts of thuggery.

He said , The suspects are part of a syndicate terrorizing Misau town headquarters of Misau Local Government of the State.

Those arrested and paraded by the Command are: Auwal Usman, 17 years and Ibrahim Ibrahim, 18 years all of Misau town.

The PRO said that Preliminary investigations revealed that the suspects used machetes and knives in attacking four people who are currently receiving treatment at FMC Azare as a result of the injury they sustained., they specialized in attacking residents and dispossessing people of their belongings while Other gang members are at large, effort is ongoing to ensure that they are arrested.”

The Command assured that its personnel will continue to provide security to citizens of the state in collaboration with other security agencies in the state urging residents to be security conscious and report strange characters to the nearest security outfit.