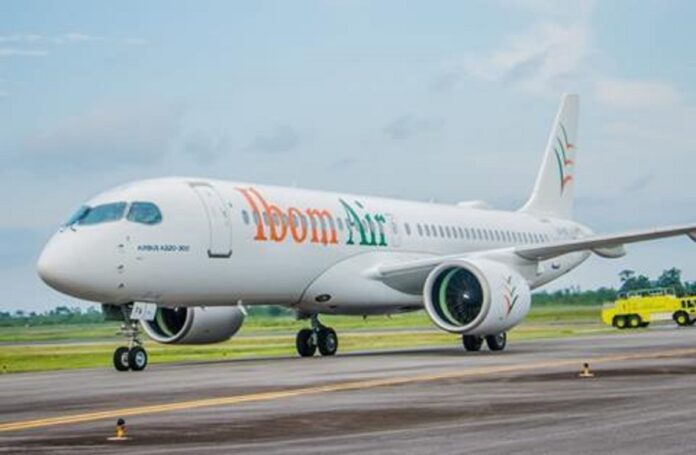 Ibom Air has once again emerged the best airline in Nigeria, an award it also won in 2021, its first year of operations.
This was disclosed by Mr Ikechi Uko, Organiser, Travellers Award and publisher ATQnews.
Uko said this was based on the ranking of Nigerian airlines, using the following parameters: average age of Aircraft, schedule integrity, spread of services, customer care, inflight services and total number of flights done in 2021.

” This year’s Travellers Award chose to highlight the expectations of travellers in Nigeria.

” The Organisers listened to the complaints and yearnings of travellers by incorporating these in the selection of the 2022 winners.
“Delays and cancellations are big issues on the domestic scene, customer care and schedule integrity ranked high on most social media feedback reports,” he said.
Uko noted that with the independent research done by Publishers of Atqnews.com using statistics released by Nigerian Civil Aviation Authority and other sources, Nigerian Airlines are ranked from 1 to 10 on all parameters and their scores totalled up.
According to him, the airline with the lowest scores was ranked as leaders.
“The awards will be presented on March 11, 2022, at Abuja Jabamah.
“Travellers Award was instituted in 1996 by the Publishers of Travellers Magazine and Atqnews.com with the theme: ‘Promoting Excellence in Travels’,” he said.

According to Uko, about 65 to 70 aircraft by 10 airlines carried over 12 million passengers to over 20 active airports in Nigeria.

Uko further disclosed that Air Peace won the award of the Best Nigerian International Airline of the year.

He said the top 5 Airlines in Nigeria for the year 2021 are Ibom Air, Air Peace, Green Africa, Arik Airline and Dana Air.

“Ibom Air came out tops with the lowest score of 12, having topped the chart in four of the parameters.

“It only did badly in the spread as it flies to only 6 destinations, so it ranked 8 out of the 10 airlines that were profiled.

“It also had the second highest number of flights done despite having only seven aircraft and was flying to only 6 destinations.

“It had done more flights than airlines that had more planes and flew to more destinations, this was a very remarkable operation similar to popular low cost carrier models optimising the use of aircraft,” he said.

Uko noted that Air Peace came in second with a score of 17, It came first in National Spread and had more flights than any other airline in Nigeria.
He said Air Peace is the big international player in the market. Despite its huge size, it still scored very high in average age and customer care.
“It did well on all parameters which shows its potential as an emerging global player.
“It came fourth in Average Fleet age, fourth in on time Performance, third in Inflight Services and fifth in Customer Care,” he said.

“Green Africa came third overall with a score of 18. This is the surprise in the Pack. One of the new players in the park that had a lot of false Starts so much so that it was initially written off as just another portfolio airline.

“It ranked second in Average age of Fleet, also second in schedule integrity, third in customer care, fifth in inflight services and sixth in spread of services across Nigeria which is surprising for an airline with just few planes, a very good score for a new airline,” he said.
Uko disclosed that Arik Airlines came in fourth with a score of 24, third in average age of fleet, second in spread across the nation, sixth in schedule integrity, sixth in inflight services and seventh in customer care.

“Dana Air is the fifth-ranked airline in Nigeria with a score of 25, it came second in customer care, second in inflight services, fifth in schedule integrity, eighth in average age of fleet and eighth in national spread,” he said.