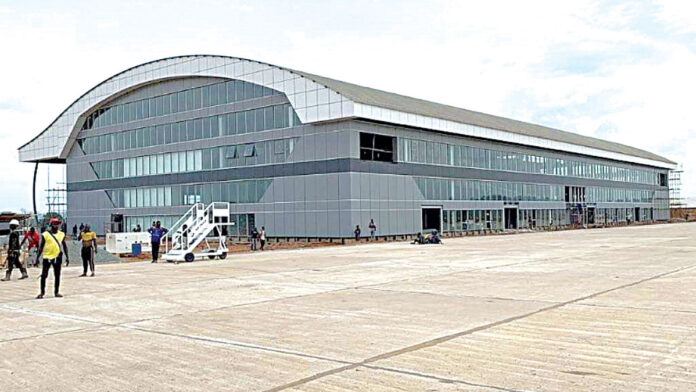 OPEN LETTER TO:
CHIEF OF ARMY STAFF,
CHIEF OF NAVAL STAFF,
INSPECTOR-GENERAL OF POLICE,
DIRECTOR-GENERAL, DEPARTMENT OF STATE SERVICES (DSS),
PRESIDENT AND COMMANDER-IN-CHIEF OF THE ARMED FORCES, FEDERAL REPUBLIC OF NIGERIA, HIS EXCELLENCY, MUHAMMADU BUHARI,
THE SENATE PRESIDENT OF THE FEDERAL REPUBLIC OF NIGERIA,
THE SPEAKER OF HOUSE OF REPRESENTATIVES

The land mentioned above are the individual various families land and they are not the communal land owned by the Ivite Umueri quarter.

We hereby state that the land we owned jointly are the lands we donated to the Anambra State Government of Nigeria for the construction of the Mega Anambra International Cargo and Passengers Airport at Ivite Umueri. It is worthy of note that all the above-mentioned camps are the individual family lands we inherited from our fore-fathers and all these are not jointly owned by Ivite quarter of Umueri in Anambra East Local Government Area of Anambra state of Nigeria.

We want to state categorically that some selfish indigenes of Ivite Umueri who call themselves the Elites who are also serving and retires military officers, serving and retired officers of the Nigeria Police Force, are planning to cook unfounded allegations against the individual lands owners of Ivite Umueri and also to intimidate, harass, humiliate, incarcerate and maltreat us to grab our lands which is contrary to the Rules of Engagement (RoE) and conduct of Nigerian Army and Nigeria Police Force.

We also want to state it clearly that those officers normally boast that they have contacts of Chief of Army Staff (COAS) and that of the Inspector-General of Police (IGP) and as such, they can do and undo. The so-called Elites are also boasting that nobody will question their illegal activities in Ivite Umueri in so far as they have upper hands from higher Army and Nigeria Police formations in Nigeria.

Again, we want to state that the land matters are pure civil in nature and not criminal.

Therefore, we are appealing to the Presidency, Chief of Army Staff and Inspector-General of Police to use their esteemed good offices to direct the General Officer Commanding (GOC) 82 Division of the Nigerian Army, Enugu and the Assistant Inspector-General of Police (AIG) in-charge of Zone 13 Zonal Command Headquarters at Ukpo, Anambra state to desist from involving themselves in a civil matter of this nature as it amounts to unprofessional conduct.

As law-abiding citizens, we don’t want to take up arms and go to war with anybody to avoid free flow of blood on the streets, hence we decided to use this medium to air our grievances to allow peace reign.

How my husband’s 17-year-old son impregnated me

How to secure Kanu’s freedom — Ahamba