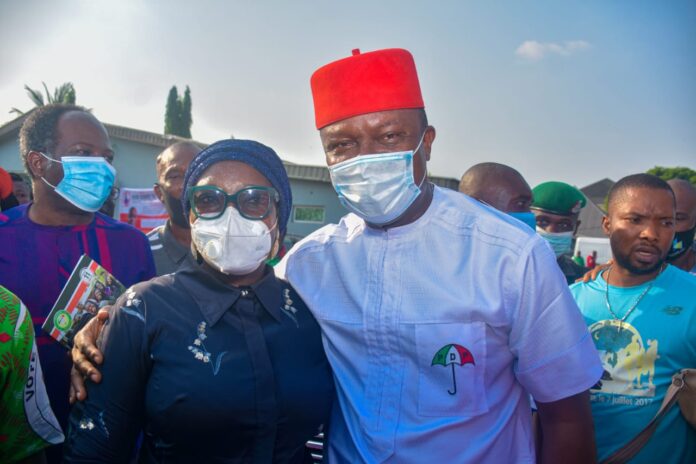 Chairperson of the Anambra State Campaign Council of the Peoples Democratic Party (PDP), Sen. Uche Ekwunife, has restated her resolve to give her best to ensure the party wins the November 6 governorship poll in the state.

Ekwunife, who represents Anambra Central in the National Assembly, also called on the members of the party to work assiduously to deliver the party at the election.

The lawmaker spoke during a stakeholders meeting at Senator Uche Ekwunife Event Centre, Awka. It was attended by some of the key leaders of the party.

Ekwunife, a grassroots politician, made it clear that the PDP remained the most credible alternative for Ndi Anambra; and that the party leaders would not leave any stone unturned in their efforts to win the poll.

The influential senator, who described her party as one built on democratic ideals, made it clear that the party was already on a sweet ride to Agu Awka considering the many positive factors working for it.

She, therefore, appealed to the members of the party who may still be aggrieved for some reasons to forgive the party, stressing the need for the party to remain united ahead of the crucial poll.

She urged the party’s standard bearer, Chief Valentine Ozigbo, to be magnanimous in victory and exhaust all possible means to assuage aggrieved members including those who had taken the party to court.

Ekwunife re-emphasized that politics is local and that stakeholders should return to their respective LGAs/wards with determination; and work tirelessly to ensure that those who left the party return within the shortest period of time.

While conveying the message of the party’s Vice Presidential candidate in the last elections, Peter Obi, who was unavoidably absent, Ekwunife reiterated the need for all hands to be on deck to ensure that the party emerges victorious in the poll.

“I urge everyone to return to their respective LGAs/wards with determination; and to discharge their duties with dedication and clear conscience. If every one of us here wins our polling unit, PDP will win”, the grassroots-friendly lawmaker said.

Also speaking, the chairman on the occasion, Sen. Ben Obi, commended Ekwunife for her efforts towards ensuring the party’s victory, describing her as a politician who understands the intricacies of politics and a dogged fighter who fights for what she believes in.

He, however, appreciated God for the Appeal court victory, stressing that the battle had just begun. He advised the party’s candidate to embrace all and sundry to ensure that the PDP returns to Agu Awka.

State chairman of the party, Chief Ndubuisi Nwobu, noted that the duty of the stakeholders was very simple but taxing. He said that with the spirit of oneness and focus, the PDP would win the poll.

Nwobu, who eulogized Ekwunife for her immense contributions to the growth and development of the party, expressed delight that all issues concerning the primary election have been settled.

He said that the lawmaker’s choice as the chairperson of the state campaign council was a wise decision by the party hierarchy.

Governorship candidate of the party, Ozigbo, described the stakeholders meeting as very important and consequential, noting that the coming weeks would be very crucial for the party.

Ozigbo emphasised that with unity and sustained momentum, that victory would be achieved. He called for unity amongst members while restating his readiness to lead the party to victory.

Some of the stakeholders of the party at the meeting included the member representing Ogbaru Federal Constituency, Hon. Chuchu Onyema; his counterparts for Awka North and South and Idemili North and South Federal constituencies, Hon. Chinedu Onwuaso and Rt. Hon. Obinna Chidoka respectively.

Others are the member representing Ekwusigo in ASHA and Minority Leader of the state Assembly, Onyebuchi Offor and the Director General of the state governorship campaign council, Dr Alex Obiogbolu, among others.

In their separate speeches, they promised to work very hard in their various constituencies to deliver the party on the election day.