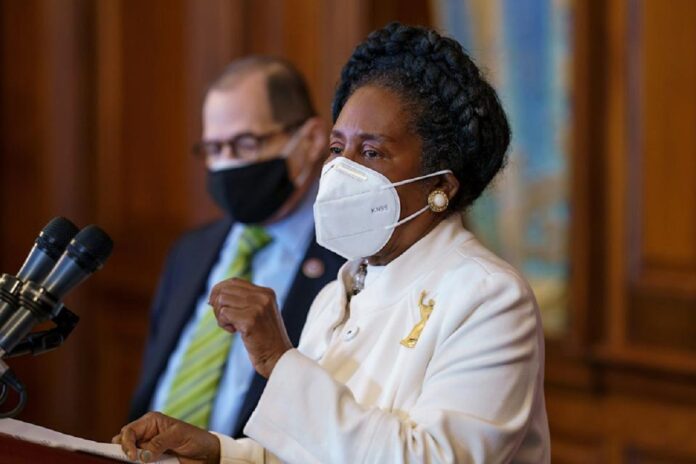 WASHINGTON – Legislation to create a commission to study slavery reparations for Black Americans cleared a House committee Wednesday in a historic vote — making its way to the full House for the first time more than three decades after it was initially introduced.

The legislation, HR 40, was first introduced 30 years ago, and now faces a full House vote. Should it pass the House, the measure would go to the evenly divided Senate.

The House Judiciary Committee voted 25-17 Wednesday to advance the bill.

The bill would establish a 13-person commission to study the lasting impacts from slavery and ongoing racial discrimination throughout the country’s history. The panel would submit its findings to Congress and recommend any necessary remedies, including compensation to Black Americans.

The legislation, or the Commission to Study and Develop Reparation Proposals for African-Americans Act, is currently sponsored by Rep. Sheila Jackson Lee, D-Texas.

In a statement, Jackson Lee said the vote in the Judiciary Committee was “long overdue.” For more than two decades before her, Rep. John Conyers, D-Mich., introduced it year-after-year without success.

More: Reparations bill gets new attention amid BLM. Could other nations provide a blueprint?

Lee said Conyers entrusted her with continuing the legislation as he retired.

“I took that challenge seriously and here we are today, marking it up for the first time in the history of America any legislation that deals directly with the years and centuries of slavery of Africans and African American people who are now the descendants of those Africans,” Lee said during Wednesday’s hearing.

The deaths of George Floyd, Breonna Taylor and other Black Americans — including the recent death of Daunte Wright— have drawn attention to racial inequality in the public consciousness and renewed debate on how to remedy America’s history of racism toward African Americans – including reparations.

Rep. Madeleine Dean, D-Pa., the vice chair of the House Judiciary Committee, told USA TODAY Tuesday evening she hoped there would be openness to have real discussions on the issue and asked: “Hasn’t the last year educated us or re-educated us about injustices, the historical injustices?”

Reparations – or compensation for historical crimes and wrongdoings with the aim of remedying injustices and helping specific groups of people or populations to prosper –have mostly been experimented with in international settings.

“By passing H.R. 40, Congress can also start a movement toward the national reckoning we need to bridge racial divides. Reparations are ultimately about respect and reconciliation — and the hope that one day, all Americans can walk together toward a more just future,” Jackson Lee said.

Dean said she believes “the study of reparations is the reasonable thing to do.”

According to an estimate from William Darity, an economist at Duke University whose research is devoted to inequality in the context of race, and Kirsten Mullen, a historian, the cost of compensating Americans descended from slaves for the legacy of bondage and subsequent racial oppression could be up to $12 trillion.

In the U.S., support for reparations for the federal government’s role in slavery has been both growing and met with skepticism. Though Congress for the first time formally apologized for slavery in 2008, H.R. 40 has still faced opposition.

Opponents of the bill called it divisive and argued present-day Americans should not be held responsible for the consequences of slavery, which ended by the passage of the 13th Amendment in 1865.

“No one should be forced to pay compensation for what they have not done,” Rep. Steve Chabot, R-Ohio, said. “Paying reparations would amount to taking money from people who never owned slaves to compensate those who were never enslaved.”

Rep. Thomas Massie, R-Ky., a member of the House Judiciary Committee, told USA TODAY Tuesday night he would not vote for reparations or to create a commission to study the issue, but was “looking forward” to the discussion Wednesday.

Texas Rep. Veronica Escobar, a Democrat on the committee, said prior to the vote she hoped Republicans would approach “this with open minds and open hearts.”

“My hope is that we can approach the idea of equity, the idea of justice, the idea of looking back at our history in order to do what’s right in the future. I hope that they approach it with an open policy mind,” she concluded.

More: 12 charts show how racial disparities persist across wealth, health, education and beyond

Studies have shown the net worth of a typical white family is nearly 10 times greater than that of a Black family. Black Americans are also less likely to own a home than other racial and ethnic groups. The Black poverty rate is double the white rate.

According to an analysis by Mullen and Darity, reparations could lead to the elimination of the Black-white wealth gap within 10 years.

If the legislation move to a full House vote and passes, it would face slim chances of making it through the Senate.

When asked about the issue in 2019, then-Senate Majority Leader Mitch McConnell, R-Ky., whose great-great grandfathers enslaved people on Alabama cotton farms, said in a hearing on the topic he didn’t “think that reparations for something that happened 150 years ago, for whom none of us currently living are responsible, is a good idea. We tried to deal with our original sin of slavery by fighting a Civil War, by passing landmark civil rights legislation, by electing an African American president.”

Sen. Cory Booker, D-N.J., has filed a companion version of the bill that would need the support of at least 10 Senate Republicans to advance in the Senate past the filibuster.

‘This has been a tough week’: Black lawmakers discuss racial inequities, COVID with Biden

Leaders of the Congressional Black Caucus met with Biden and Vice President Kamala Harris at the White House for the first time Tuesday and laid out their policy vision, which included a conversation with the administration on reparations.