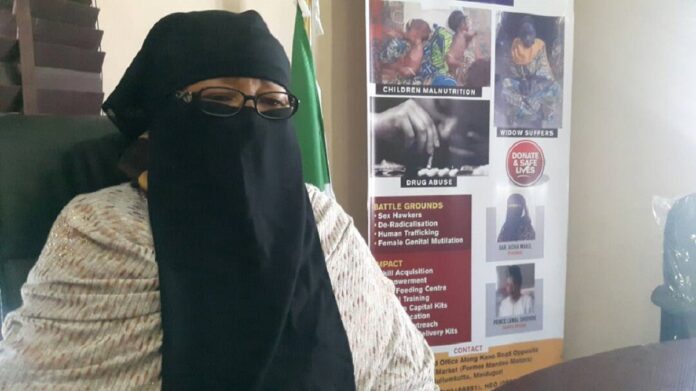 Justice Umaru Fadawu of the Borno State High Court, Maiduguri, has ordered Aisha Alkali Wakil alias “Mama Boko Haram” to testify orally in her defence rather than through writing.

It will be recalled that the EFCC closed its case against Wakil and her co-defendants on February 11, 2021, while the matter was adjourned to March 1, 2021 for the defendants to open their defense.

However, rather than open their defense on March 1, 2021, Wakil filed an application seeking the leave of the Court to enter her defence in writing, citing inability to speak which she premised on ill health.

The prosecuting counsel, Fatsuma Mohammed had objected and prayed the Court to refuse the application on the grounds that, the first defendant placed no material fact before the court to show that she could not speak, and that she pleaded ‘not guilty’ orally, when she was arraigned on March 5, 2020.

Justice Fadawu, subsequently adjourned the matter to March 4, 2021 for ruling on the application.

At the resumed hearing today, Justice Fadawu ruled that Wakil must testify orally. “I entirely agree with the submission of the prosecution that Aisha Alkali Wakil pleaded ‘not guilty’ when she was arraigned before this court. She spoke directly to the court. Therefore, the application is hereby refused and the first dependent is to testify on her behalf orally”.

Justice Fadawu, after throwing out the application, adjourned the case till March 22, 2021 for the defence to open its case. The defendants are also to remain in Maiduguri Medium Correctional Centre.

The first defendant, Wakil who is the Chief Executive Officer of Complete Care and Aid Foundation (NGO), alongside Prince Lawal Shoyade and Tahiru Saidu Daura, Programme Manager and Country Director respectively, are facing trial for alleged fraud to the tune of N40, 000, 000 (Forty Million Naira).