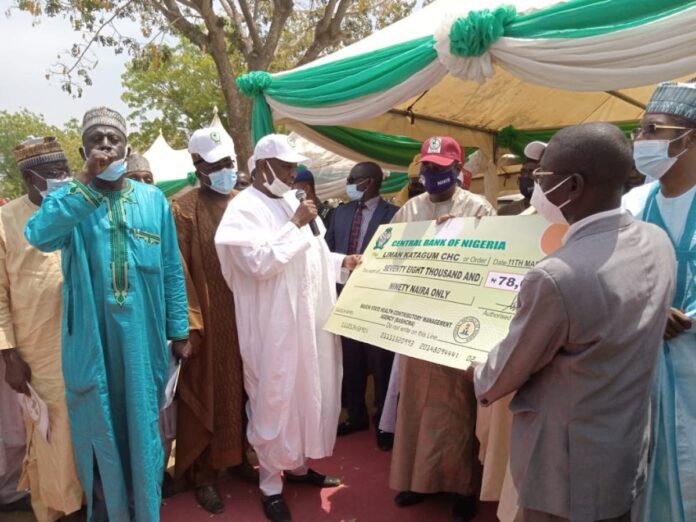 45,000 people in the 323 wards in Bauchi State are to benefit from the allocation of support for healthcare services in the Basic Healthcare Provision Fund (BHCPF) National Health Insurance Scheme NHIS Gateway services.

The Bauchi State Governor, Senator Bala Mohammed Abdulkadir stated this in Liman Katagum When he  flagged off the disbursement of funds to the center at the Primary Health Center in Liman Katagum.  He said that his administration will continue to accord priority to effective and qualitative health care delivery services across the state.

Governor Bala said those to be enrolled in the scheme are under 5 children, the aged in the various communities, pregnant and nursing women, students and other vulnerable individuals within the communities.

Represented by his Deputy, Senator Baba Tela, the Governor lamented that accessing healthcare services especially by the not too wealthy people has become a problem stressing that some even sell or mortgage their properties in order to access quality healthcare services.

He said that the COVID-19 pandemic outbreak has further compounded the health issues as it brought every aspect of life to a standstill thereby reducing access to healthcare delivery services across the country including Bauchi State.

Governor Bala said that the allocation to the state came nine months after its approval, he said that it has come and it must be utilised assuring that it will be disbursed according to the guidelines by the NPHCDA.

Executive Secretary of National Primary Healthcare Department Agency (NPHCDA), Professor Mohammed Nasiru Sambo, said that the federal administration is committed to improving healthcare delivery services across the country a development he said led to the several health policies adopted by the administration.

He said that the NHIS is to be well funded by the Federal Government to enable it to disburse money to all the state to enable them properly to fund the various health care services schemes.

The Executive Secretary said that Bauchi State has already received  over N500m from the federal government to enable it to fund its health care insurance scheme which he said is part of the scheme being flagged off .

He said  that the NHIS has been repositioned for effective service delivery, and assured that the NHIS will not stop supporting and collaborating with Bauchi state until every targeted person was reached with the health insurance scheme.

The State Commissioner of Health, Dr Aliyu, Mohammed Maigoro said that the most effective way of health services financing is support by the government through the health insurance scheme which has been introduced by the government.

Commissioner lamented non approval of budget recommended for the Health sector by the Federal Government, and identified lack of commitment on the side of implementors of the programme has led to the failure of the scheme across the country calling for proper monitoring to ensure that this time around it did not fail.

The Commissioner assured that funds have been made available for disbursement to all the beneficiaries across the state urging the two agencies involved in the exercise to ensure that it was done as designed.

Executive Chairman of Bauchi State Primary Health Care Development Agency BASPHCDA, Dr Rilwanu Mohammed, said  that the sum of over N400m has been received by his agency for disbursement which will go directly to the 323 facilities across the state saying that accounts have been opened for the facilities.

He said that from the assessment made so far, the sum of over N300m has been earmarked for disbursement to all the facilities that are ready saying however that only two facilities are not readily available for now.

The Executive Chairman of BASPHCDA also said that personnel for the scheme have been trained to effectively man the facilities and ensure that the scheme succeeded assuring that there will be monitoring of the programme by the Agency.

All the facilities enrolled for the scheme are to get monthly allocations to function with a stern warning that any facility found wanting in the scheme will be death with.