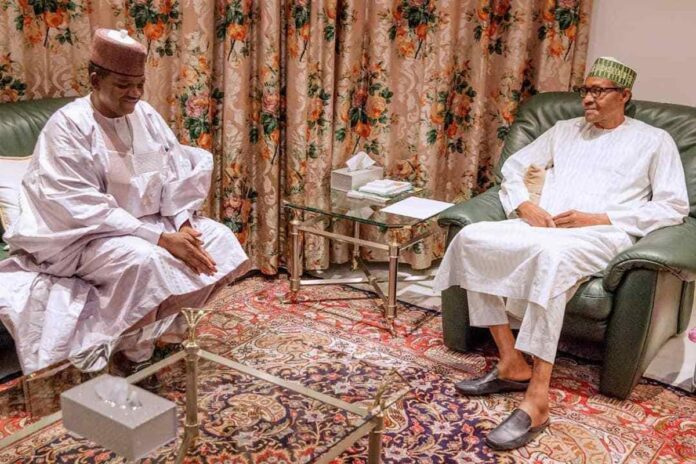 Gov. Bello Matawalle of Zamfara on Wednesday in Abuja briefed President Muhammadu Buhari on the security situation in his state with the president pledging to assist the northwestern state to address the lingering inchallenges.

The governor, while briefing State House correspondents after he met behind closed doors with the president, said that a presidential intervention toward addressing the challenges facing the state had become necessary “so as to sustain the peace Zamfara is now enjoying’’.

According to him, a solution to the recurring violence between farmers and herders is in sight.

“A solution to the incessant violence is in sight. All state governments must brace up and construct grazing grounds, popularly called Ruga, so as to find a lasting solution to clashes between herdsmen and farmers across the country.

“The provision of the grazing grounds will go a long way in preventing herdsmen from moving from one place to another.

“In Zamfara, we are constructing Ruga for them. It is like a settlement where we can contain some of them because, sincerely speaking, if we allow them to keep moving around, migrating from one State to another, we cannot bring this issue to an end.

“So, the only thing the governors will do, we are discussing that, is to make sure we contain them in one place. The Fulani from Zamfara, for instance, shouldn’t migrate to a neighbouring State.

“The Ruga that we are constructing has schools, hospitals, veterinary clinics, markets and even a mini stadium where they can meet for their cultural festivals.

“You can also create something like a dairy factory there. If we allow them to migrate from place to place, that is where we will have problems.

“But I believe that very soon the Nigerian Governors’ Forum will discuss that and know the action to take in order to contain them in one place because they are looking for pasture.

“Once they have a grazing reserve and all facilities in one place, I don’t think they will move from place to place and that will be the end of all the clashes,” he said.

Matawalle said he was engaging bandits in Zamfara in dialogue not as a sign of weakness but to initiate a peace deal with them because he realised that not all of them were criminals.

He, therefore, called on his Niger counterpart to dialogue with bandits operating in his state so as to address the menace of banditry there.

“Banditry is something that I inherited when I became governor; it had been there for almost eight years before I came. Following the dialogue I initiated with the bandits, Zamfara is now very calm.

“I have advised my colleague, the Governor of Niger, to meet with all stakeholders and find out the root cause of the crisis so as to initiate dialogue and ensure reconciliation. That is the only way to achieve what I have been able to achieve in my State.

“Most of the criminals that caused trouble in Zamfara were not from my State. Two months ago, we had some repentant bandits who surrendered their weapons to the State government. One was from Yobe, two from Kaduna, two from Niger; so, you see, it is a gang.

“In any case, we are in discussions with the Governor of Niger and he is following the steps so as to ensure a peace deal. Very soon we shall see an end to the clashes,’’ he said.

The governor thanked Buhari for the show of concern and particularly lauded his commitment and readiness to assist Zamfara to consolidate on the peace the state was enjoying.