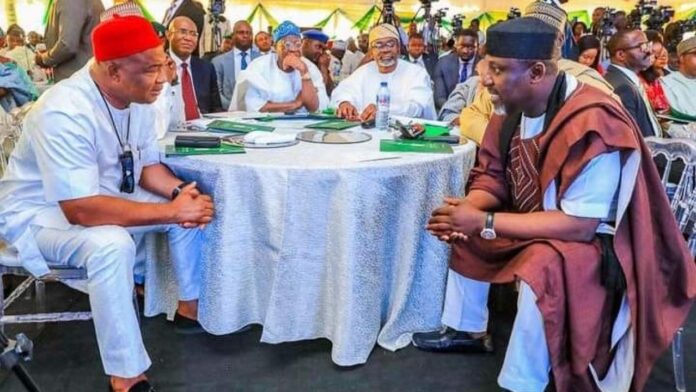 – He Should Stop His Relentless War Against Senator Okorocha.

This is to inform the general public, that, as early as 6:15am today, being Thursday, January 21, 2021, Seven Hilux Vans loaded with heavily armed Police men, invaded a Warehouse along Aba road, opposite Alaba International Market, on the orders of the governor of the State, Chief Hope Uzodinma.

We have also read what the Commissioner for Commerce and Industry, Mr. Simeon Ibegbulem said were recovered from the Warehouse. It was interesting to read that what the Commissioner said they recovered from the warehouse were street lights accessories and cartons of ties and without his disclosing how he arrived at the Conclusion that those items were owned by the government.

The government should disclose or publish the proof of ownership of all they claimed they had recovered. All these cock and bull stories have become irritating. If Governor Uzodinma was not demolishing Okorocha’s projects, he was invading warehouses in his government’s desperation to malign Okorocha.

And the question is, how would all these help governor Uzodinma in the governance of the State. We have been reluctant to use the word clueless, but the government’s actions and inactions have given reasons to be described as such.

And if Okorocha wanted to hide any item, could he have done so at a Warehouse along the busy Aba road and opposite one of the biggest markets in Owerri, the Alaba International Market? And if after 8 years of being governor, what the government could claim to have been looted by Okorocha were street light gadgets and cartons of ties then, those who invaded the warehouse should cover their faces in shame.

It should also be recalled that the Hon. Jasper Ndubuaku-led Recovery Committee had long before now, invaded the same Warehouse also on the claim that it was recovering government’s properties, which ended as hoax.

We want to also call on the Police Command to investigate those in Police uniforms, who invaded the warehouse, to find out whether they were really Nigerian Police, since it was not expected that Police men would have gone for the invasion of the warehouse, without a valid Court Order.

We have also discovered that since the incident that happened at the burial Church Service of Bishop Gregory Ochiagha, at the Holy Trinity Catholic Cathedral, Orlu, the governor has intensified his onslaught against Okorocha. At the Service, Imo people who were at the Service, failed or refused to behave as if someone was talking, when the governor addressed the Congregation. But when the priest moderating the Service, introduced Okorocha, there was thunderous ovation that lasted for minutes. This could be the reason behind the renewed anger of the governor against Okorocha.

Administration is not an easy business. If the governor is finding it extremely difficult to break even or break through, he should consult his brother, Okorocha, to tell him how he did it and to a large extent, succeeded, inspite of the meager resources of the State. The best approach is not destroying Okorocha’s legacy projects or chasing shadows, but to ask questions.

The governor should have known by now, that, demolishing Okorocha’s Signature Projects could have been one of the reasons for the anger of Imo people against him and against his government. So, his embarking on recovery of non-existent or imaginary Properties only showed that the sound of bitter kola in the mouth, does not reflect the taste.

It is our prayer that the governor should begin to govern the State and stop shadow chasing. It does not add up.