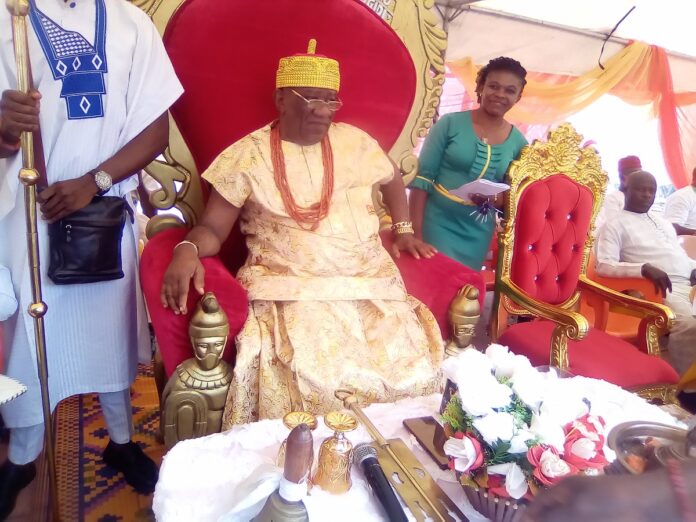 The Traditional Ruler of Ogidi community in Idemili North Local Government Area, Igwe (Pharm.) Alex Onyido has threatened to place a curse on rumor mongers and chronic liars who were bent on tarnishing his image if they refuse to tender unreserved apology to him.

It would be recalled that some irate youths from Uruezealor village, Ogidi had barely two months ago, carried out a protest against Igwe Onyido, over alleged land tussle between himself and the villagers, to the extent of dumping the corpse of their deceased leader, Chike Okoye at the Igwe’s palace on the eve of their Nwafor annual cultural festival.

The irate youths had during the protest, accused the monarch of inviting the police men who came to arrest the late Okoye before he allegedly jumped out of two-storey building in an attempt to evade arrest and later died at Iyienu Mission Hospital, Ogidi, which then triggered off their violent protests.

Although several efforts had been made by the leadership of Ogidi Union Nigeria, OUN, led by its President-General, High Chief Chuka Onubogu (Ife Ogidi) to broker peace between the bereaved family and the village youths on one side, the monarch and the Igwe-in-Council on the other side, to which most of the angry youths have soft pedaled, Igwe Onyido is very furious that some miscreants in the community have cashed in on that bygone misunderstanding to rain all sorts of abuses against him and his throne.

In his message yesterday at his Palace, during his Alonmuo annual cultural (New yam ) festival, Igwe Onyido declared that although the ceremony appeared to be very glorious, enticing, grand and above all glamorous, which will henceforth be celebrated all through his reign and beyond, he is demanding an unreserved apology from those who lied and are still lying against him.

According to the monarch, “I love my people so much and they love me too but I want to use this opportunity to ask those miscreants, most of whom are jobless who told unfounded lies against me and my throne to apologize to me as quickly as possible or else I will place a curse on them”.

“I am the only traditional ruler in this state that is paying monthly stipend to people from 80 years and above in Ogidi, yet these miscreants who pretended not seeing anything good from me are going about lying to people that I was the one who sent the police to come and arrest some youths, including the late Okoye”.

“I was called to ascent this throne by my ancestors and as such, if I place a curse on any person or persons because of lies being peddled against me, I swear that person or persons will start seeing the effect of the curse within a month or two”.

In his speech, the President-General of OUN, Onubogu, noted that Ogidi community was lucky to have an intelligent and kind-hearted man in the person of Onyido who is celebrating his third Alonmuo festival as their traditional ruler and called for peace and tranquility in the area.

According to Onubogu, “as far as I am concerned, I have tried as much as I could to restore total peace and reconciliation in this town and I have achieved that but I must warn that those still going about insulting our Igwe or telling all sorts of lies against our throne occupant is doing so at his or her own risk”.

Moreover, High Chief Cletus Onwuzulike  also prayed that God would continue to bless Igwe Onyido in much wisdom so that he would live to perform more New yam festivals asking the restive youths to embrace agriculture or any other meaningful employment instead of constituting nuisance in the peaceful community.