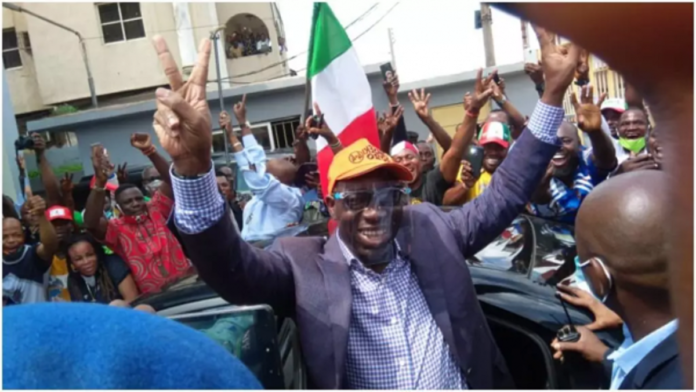 Godfatherism is a doctrine of the Catholic Church where a child is blessed with a godfather and that child becomes a godson.  The idea is for a godfather to provide guidance and be role model to the child from infancy to adulthood. Therefore, there is nothing wrong about godfatherism. It is an ecumenical concept; a cosmopolitan reality. Whether one likes it or not, godfather’s influence permeates our society. But it has been misplaced and wrongly deployed in Nigerian politics. Personally, I believe that in every sphere of life, we need godfathers to help us to overcome the challenges of life.

In politics, neophytes need to be supported and assisted to overcome challenges.  Gratitude is the normal reaction for such support. For instance, it is on record that former Governor of Edo State, Chief Lucky Nosakhare Igbinedion, who is now in the same camp with Governor Godwin Obaseki, ruled the state when there were three godfathers plying their trade on the state’s political terrain. It was even a more complex situation in which one of the three godfathers was his biological father. Despite the influence and pressure from godfathers, it is remarkable that Igbinedion’s era has remained the most peaceful in the annals of democratic governance in the state since 1999.

To be sure, the idea of godfatherism that virtually brooks no opposition was introduced by former Governor Adams Oshiomhole with the encouragement of Mr Godwin Obaseki who was then the Chairman of the State Economy and Strategy Team.  Today, Oshiomhole has fallen under the tension of goals and objectives of his godson who had fought within the APC to become a godfather and build his own structure, among other actions; a development that conflicted with the philosophy of the original and ultimate godfather.

As chairman of the State Economy and Strategy Team for eight years, how was Obaseki able to deceive Comrade Oshiomhole to believe he would forever be a loyal godson?  In the last four years or thereabout, Obaseki has turned full circle, fighting and biting the fingers that fed him. The consequence is that the entire State under Obaseki’s governorship has become so distracted from the trajectory of good governance and infrastructure development.

The political situation and governance structure in Edo State have become complicated, thus affecting the performance rating of the APC government in Edo.  Whereas, the APC is the only state controlled by the party in the South-South zone; whereas, with the APC government in place in Edo State and Oshiomhole as the National Chairman of the APC, a synergy was expected to have been built to drive the process of human and capital development in the State; unfortunately, Governor Obaseki was not ready for inclusive government; he had set out to exclude political leaders through blackmail that they were piling pressure on him to share the state’s resources.

Over all, he was selfishly-motivated such that he did not take a position that would have favoured his people. Oshiomhole, on his part, was fighting for political survival. Surprisingly, both could not harmonise their positions to the advantage of our dear State.  The open confrontation by Obaseki against Oshiomhole, the man that God used for him as his godfather, worsened matter even as Obaseki shunned all overtures for peace and reconciliation.

Obaseki’s interest and agenda to undermine his godfather were uncompromising.  The process snowballed into a lingering battle of wits and grits; and, our dear State was turned into a laughing stock. We are now being treated with disdain. A re-election plan that would have been seamless on the APC platform had been lost on the altar of political indiscretion by Obaseki.

After causing so much unease within the ruling APC, which Oshiomhole, together with some notable politicians, among them Pastor Osagie Ize-Iyamu, founded and nurtured in Edo State, and on the platform of which he was foisted on the party by Oshiomhole in 2016 as the governorship candidate, Obaseki has now decamped to the enclave of the enemies-the Peoples Democratic Party (PDP). Also, the President had, at the National Executive Committee (NEC) of the APC, on June 25, dissolved the National Working Committee (NWC) of the party, thus effectively removing Oshiomhole as national chairman.  As it were, both of them have been shoved aside from their strategic positions in the APC, which they could have deployed in the interest of the state.

My heart is with the good people of Edo State, not with Oshiomhole and Obaseki who had reduced the entire saga that had unsettled the APC to “two fighting”. My question is, why should the fight between Oshiomhole and Obaseki bring such great pains to our people?  More painful is the quantum of our commonwealth, resources and tax payers’ money which should have been channeled into statewide development that had been unconscionably diverted to prosecute the ego battle by the governor.

Now that Oshiomhole has lost his position as national chairman, our people should insist that Obaseki should not return as governor because we want a governor with a high sense of appreciation of the significant others. We want  to get back and own our land. Not anymore shall we allow any disruptive person to inflict unease and disharmony among us.

What we need, therefore, at this critical intersection is a unifying factor and, to God be the glory, we have a formidable binding force in Pastor Osagie Ize-Iyamu, who enjoys God’s abundant grace such that efforts made by political opponents to frustrate his God-ordained march to the governorship seat, had failed woefully.

In 2016, Pastor Ize-Iyamu ran against Obaseki in the governorship election. I observed the process that culminated in his “loss” to the State APC machine superintended over by Oshiomhole and backed by the Federal Might.  Even at that, Ize-Iyamu proved himself to be a difficult opponent to beat.  Although Obaseki was declared the winner, Ize-Iyamu got the people’s approbation.

In a reversal of platforms, Ize-Iyamu is back in the APC and has emerged as the party’s standard bearer while Obaseki has controversially emerged the candidate of the enemy camp- the PDP.  That gives Ize-Iyamu a head start, as a candidate with statewide appeal, which is a function of his grassroots network and mobilizational dexterity. With his SIMPLE agenda, Pastor Ize-Iyamu is set to take the lead in the urgent task of transforming our state and taking it to the next level in infrastructure and human capital development.

The Pastor Ize-Iyamu leadership brand will make a clear difference where Governor Obaseki, who had made some strategic missteps by taking on his godfather, had been dull-witted. Besides, what brand will Obaseki flaunt during electioneering for the September 19 governorship election that will make the people to significantly alter their perception of him as a political neophyte and destroyer of all things bright and beautiful? At least, he can now see what his godfather did for him in 2016 when he (Oshiomhole) practically campaigned as if his name was going to appear on the ballot.

Already, the governor has passed through the blistering heat of politicking and intrigues in the past few days. He had sweated and spent so much money to get into the camp of the political enemy; a camp to which he had been a complete alien until he began to look for a platform for his re-election. His embrace of the PDP places him in a precarious and untrustworthy stead. There is a saying that a man that watches a woman commit prostitution and goes ahead to marry her, will not have the scruples to complain in the community when she continues with her promiscuity.  There is also a saying that the cane used to flog the first wife is saved for the second.

The PDP members know the character of their new leader. They had on several occasions negatively profiled him. But they should know that If Obaseki could battle his godfather to a standstill, what would he not do to the party of tax collectors, according to Rivers State Governor, Nyesom Wike, who foisted his candidature on the party as a fait accompli? The PDP members and leaders should also be ready to receive a raw deal from Obaseki and be barred or banned from the Government House in case Obaseki wins. But God forbids.

Perhaps, more disturbing is the ethnic politics that Obaseki plays and promotes. He has dabbled into ethnic politics by promising to hand over, if he wins, to Edo Central in 2024. To believe this promise by a governor who is reputed for not keeping promises, is to believe anything and live in fools’ paradise. This is also the same way he has resorted to playing Benin ethnic card against Oshiomhole. I wonder how Oshiomhole has become an issue in an election that has two Benin candidates in the frontline: Ize-Iyamu and himself.

My good people of Edo State, this is not the time to consider giving a second chance to a non-performer, a disruptive force and destroyer of our binding values. Obaseki should mention the names of Benin people that he has empowered apart from his friend from Delta and Lagos States.  It is time to make sacrifice for peace, a great deal of sacrifice, for our dear State. The urgency of NOW demands that all of us – men, women, youths and aged – should stand up to be counted on the side of a peaceful and united Edo State where infrastructure development is rapid and evenly spread while we achieve economic prosperity  through the magnitude of a disciplined leadership that Pastor Osagie Ize-Iyamu provides.  With Pastor Osagie Ize-Iyamu, the future is certainly Now!

*Hassan Ainofenokhai, political observer and analyst, is a concerned indigene of Edo State.