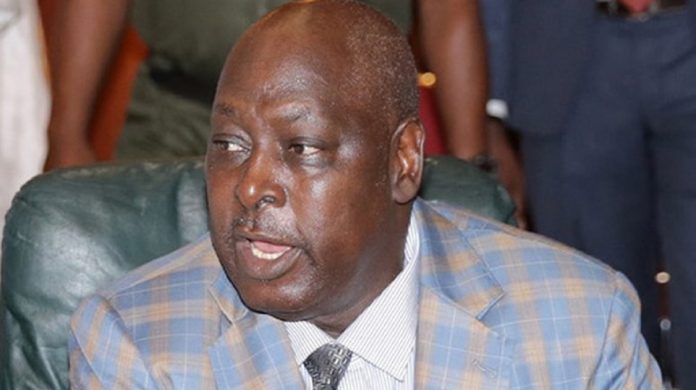 Justice Jude Okeke of Federal Capital Territory High Court, on Wednesday, June 10, 2020, slated July 6, 2020, for ruling on the eligibility of a prosecution witness to testify in the on-going trial of former Secretary to Government of the Federation, Babachir Lawal for alleged N500 million (Five Hundred Million Naira), grass-cutting scam.

The Economic and Financial Crimes Commission, EFCC, is prosecuting Lawal, his younger brother, Hamidu David Lawal, one Suleiman Abubakar and Apeh John, alongside Rholavision Engineering and Josmon Technologies, on an amended 10-count charge, bordering on fraud, diversion of funds and criminal conspiracy to the tune of over N500 million (Five Hundred Million Naira).

At the resumed trial today, prosecution counsel, Offem Uket, presented a witness, one Chidi Eboigbe, a compliance officer with Ecobank, for testimony before the court but was opposed by the lead defence counsel, Chief Akin Olujimi, who cited Section 379(1) of the Administration of the Criminal Justice Act 2015, and noted that the witness was not listed as one of the witnesses in the matter.

“I cannot see anywhere that the witness in the box was listed among the witnesses going through the proof of evidence and cannot see any name that looks like his.  The only person from ECO Bank is Obadino Abiola Ganiyu who has given a statement to EFCC,” he stated.

Olujimi disclosed that the defence was therefore at a loss as to what the witness would say, and as such was unable to prepare for his cross examination. He therefore, urged the court to strike out the witness from the case.

All members of the defence team agreed with Olujimi’s submission, adding that their clients must be given direct notice of the witness’ appearance and evidence sought to be given by him.

In his response, the prosecuting counsel, informed the court that the prosecution listed a representative of Ecobank  as a witness in the matter and said, “the witness is not in court as a person but as a representative of the bank to speak on the documents from his bank and that the statement of account is in the proof of evidence.” Uket further noted that “Ecobank  is an entity that acts through its servants and that means any staff can be assigned to speak on the issues of past records of transactions that happened in the past and in the future.”

He informed the court that it did not matter that the transaction was not conducted by the witness and that it predated his employment in the bank and therefore prayed the court to reject the argument of the defence and allow the witness to give his testimony.

Justice Okeke adjourned the matter till July 6, 2020, for ruling on the eligibility of the witness and continuation of trial.