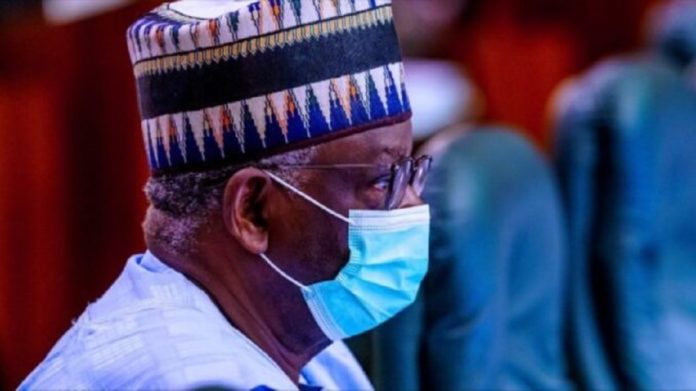 Diplomat, scholar and global technocrat, Prof Ibrahim Agboola Gambari assumed duty 13 May as the Chief of Staff to President Muhammadu Buhari following his introduction at the Federal Executive Council. He replaces the late Abba Kyari who died from complications of the coronavirus a month earlier.

Gambari, a retired global civil servant, brings to bear on the position of chief of staff diverse experiences in the academia and the public sector, serving in Nigeria and internationally.

A former Head of the Department of Political Science at the Ahmadu Bello University, Zaria, Gambari was Nigeria’s Minister of External Affairs between 1984-1985. He served under President Buhari who was Head of State. He made his mark as an erudite diplomat working in the United Nations system for more than 25 years.

Professor Gambari also served as Joint AU/UN Special Representative in Darfur and Head of UNAMID (2010-2012). Until his appointment, he  was   Chairperson of the Panel of Eminent Persons of the African Peer Review Mechanism (APRM) and Pro-Chancellor and Chairman of the Governing Council of the Bayero University, Kano.

Professor Gambari attended the Provincial (now Government) Secondary School, Ilorin, and Kings College, Lagos. He received his B.SC (Econs) degree from the London School of Economics (1968) and his MA and PhD in Political Science/International Relations (1970, 1974) from Columbia University, USA.

Gambari’s appointment has attracted praise and criticism in equal measure.

While the pro side canvasses his experience, exposure and education as a superb fit for the job, the criticics are worried about his age, his work for military dictators and his pronouncements on contentious national issues.

AbdulRahman AbdulRazaq, governor of his home state of Kwara, called the appointment “a befitting development rooted in dedication, loyalty and history.”

Governor AbdulRazaq added: “The appointment is fit for purpose and is deserving for our own Professor Gambari whose record of service as a diplomat and global statesman is unblemished. On behalf of my family, the government, and people of Kwara State, I congratulate the Wambai Ilorin for this historic appointment”.

A former Nigerian Ambassador to the United States, Prof George Obiozor also defended Gambari’s appointment against the charges of critics. He submitted that the selection of Gambari ranks with the best decisions ever made by President Buhari.

Sahara Reporters publisher, Omoyele Sowore and former diplomat, Ambassador Dapo Fafowora raised charges against Gambari including his defence of the Sani Abacha regime when that government executed Niger Delta activist Ken Saro-Wiwa. There were claims Gambari spoke against democracy in Nigeria while defending military rule. Fafowora, smarting from his sudden retirement from service, alleged that Gambari snitched on some of his colleagues; a claim already punctured by those who understand the command structure of military regimes.

Obiozor said that Gambari acted in the best traditions of diplomacy. “It will be diplomatic ignorance to think that an ambassador is sent abroad to condemn his government. An ambassador has a right and a duty to defend his government. He can come back and make suggestions at home. Gambari, as an ambassador of Nigeria to the United Nations, was exceptionally successful.”

On allegations that Gambari was anti-June 12 and in favour of a dictatorship, the former Director General of the Nigerian Institute of International Affairs submitted that the passage of time dictated that past events should not constrain the future. His words: “There is no perfect person in the world, and it is wrong to use personal issues to generalise in any political settings. All diplomats have their negative sides, but we need people with proven integrity like Gambari to function in public offices, and I see his appointment as timely. He is a man of great ideas, and I am convinced that he will bring his wealth of experience to bear in his new assignment because he has more virtues than vices”.

Obiozor asserted that Gambari is the right man for this time in Nigeria. “Nigeria is not only becoming more complex but more dangerous. It needs the skills of a diplomat, a scholar, a man with a sense of history and an amazing knowledge of its problems and possible solutions. Mr President has made a wonderful appointment,” he argued.

The testimony of Ekiti State Governor, Dr Kayode Fayemi in his book, Out of the Shadows: Exile and the Struggle for Freedom and Democracy in Nigeria, also served to exonerate Gambari. Dr Fayemi testified that during the Abacha years, Gambari as a diplomat concentrated on speaking well of Nigeria rather than on the regime. It earned him plaudits.

“I crossed swords with Professor Gambari several times in international gatherings, and even after I attacked him, he would still come around to me and say ‘Aburo (my brother), let us remember that Nigeria is greater than anyone of us, and we must always protect Nigeria’s interest,’” Fayemi wrote.

Making reference to a particular encounter, Fayemi wrote that despite the consistent attack directed at Gambari by him and other pro-democracy activists, the former UN ambassador to Nigeria exhibited an unaggressive mien both in private and public.

The Savannah Centre for Diplomacy, Democracy and Development, the think tank he midwifed, has hailed his appointmentas well deserving. It also identified focus areas. Ambassador Abdullahi Omaki, Executive Director at Savannah Centre said: “The imperative for National Elite Consensus is now most urgent. Nigerians across the Federation and in the Diaspora must work concertedly with one another, to promote common grounds, on which the survival of our great nation depends. The surest way of attaining this is through ensuring that Nigerians, especially her elites, commence talking WITH each other and not AT each other, with the hope of rapidly promoting National Unity. This is most imperative, as this will provide the necessary platform for strengthening Nigeria’s cohesion for development and growth where fairness and justice, are pre-requisites.”

Prof. Gambari is undoubtedly coming to the Presidency with an enviable pedigree of skill, competence, experience and absolute commitment to the vision and mission of President Muhammadu Buhari. For Nigerians yearning for good governance, it can only get better with Gambari assisting the President.

Race to 2023: Can a Nigerian woman become president? – By Bamikole Omishore

Going beyond politics and politicking to service: The Clem Agba exemplar – By Sufuyan Ojeifo