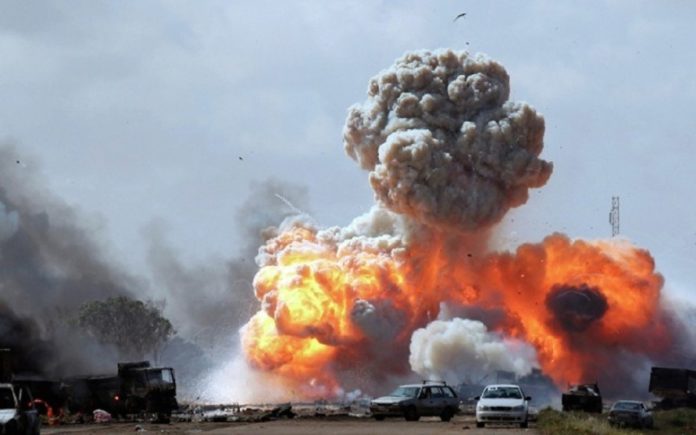 Edo state government has said that the alleged bomb explosions that have rocked homes of some members of the All Progressives Congress (APC), in the state, is not something strange.

The State Commissioner for Information and Orientation, Paul Ohonbamu, disclosed this while briefing journalists in his office on Wednesday.

Homes of factional State Secretary of the party, Lawrence Okah and Chief Francis Inegbeneki had allegedly been attacked with explosives, while the office of a front line member of Edo People’s Movement (EPM), Barr. Henry Idahagbon, was shot at by unknown gunmen.

The Commissioner described the situation as distractions that negate democracy, a smear campaign to embarrass the state government.

“I don’t think that what is happening now is not unexpected. This is exactly the kind of result you get when harlots and brigands populate.

“The tendencies is to embarrass the state, the smear campaign to make the people believe that Governor Godwin Obaseki is not doing well in terms of security but this is not the situation.

“It is necessary for you to know that everything in terms of security architect is in place. They are the one that is doing all these.

“It is necessary for us to talk to Edo people, that this intervention has become very necessary, otherwise, I won’t have called for this press bringing.

“The situation is becoming very severe, even though it is not yet critical, but it is very necessary for us to put the issue at the right perspective so that Edo people will be the better judge.

“Rather than embracing the reality of their limitations they are indulging attacks. We are not perturbed, the Governor is not moved by all these.

Ohonbamu said that aspirants loyal to the Comrade Adams Oshiomhole are merely afraid of defeat.

“These people have never said they will defeat Governor Obaseki in the primary elections. All they have been saying is that he will be removed and that the national chairman will send the lists and he will not even be given form.

“These are distractions that negate democracy. All these bomb[bings] amount to impotent grandstanding. They are afraid of electoral defeat, and I want to assure you that their defeat is in the fixed deposit.

“In terms of knowledge, moral, Obaseki is a multitude, and when men of integrity are counted, the Governor will be counted twice.

“Talking of morality Obaseki is a moral exemplar while others are moral lepers. You create tension when there is no tension, and give the impression to the President and the whole world that law and order have broken down in the state, it is unfortunate.”

He however assured the people of the state “that nothing is happening, the Governor is comfortable. He is a covenant keeper and he cannot be removed by this elements.

“All these orchestrated attacks and bombs are targeted at the Governor. First, it is the House of Assembly. Rather than accept that they are at fault to go back to the house for inauguration  they are enjoying their servitude.

“It is necessary for Edo people to know this so that they can be better judge. Obaseki has no history of violence, he does not know violence and he cannot be given to violence.

“What will Obaseki benefit by the assassination of Lawrence Okah and any other person for that matter?

“This latest move was to declare a state of emergency in the state like what happened to Joshua Dariye of Plateau State. They want ticket through the window. Why not wait for primary elections, to know how tactical you are.

“Edo state government’s position is that all these enemies of state is that they will fail.”