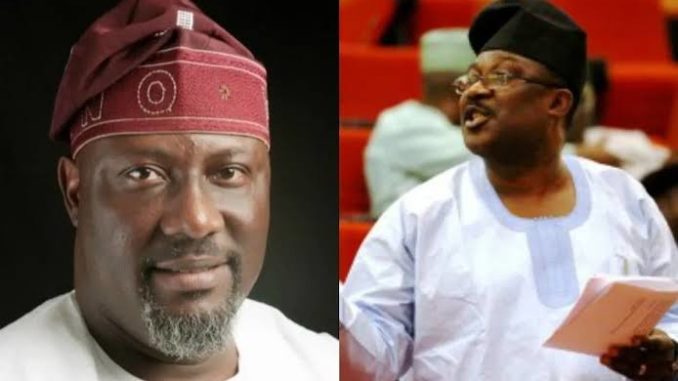 The candidate of the All Progressives Congress (APC), Senator Smart Adeyemi, has won the Kogi West senatorial district election.

The Returning Officer of the election, Professor Olajide Lawal, announced this on Saturday at the collation centre in Kogi State.

According to him, Senator Adeyemi polled a total of 88,373 votes to beat Senator Dino Melaye of the Peoples Democratic Party (PDP) who scored 62,133 votes.

Ambassador Rufus Aiyenigba of the Social Democratic Party (SDP) came third in the poll with 659 votes and was trailed by John Olabode and Adeyemi Taiwo of the African Democratic Congress (ADC) and Nigeria Elements Progressive Party (NEPP who) garnered 262 and 119 votes respectively.

The Independent National Electoral Commission (INEC) declared the APC candidate as the winner of the keenly contested election two weeks after the people of the senatorial district went to the poll.

See the result below: 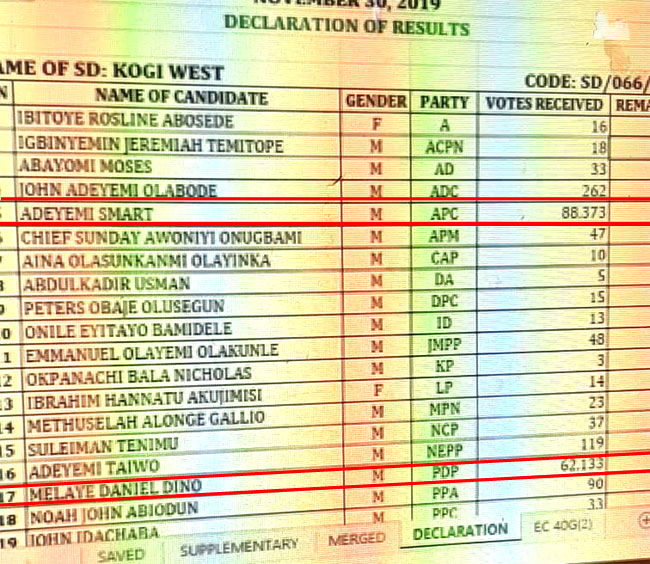 This came after the supplementary poll conducted by INEC following the November 16 rerun election which failed to produce a winner.

It was said to have been marred by violence and other alleged electoral malpractices.

Although the results of the poll favoured Senator Adeyemi who polled 80,118 votes as against Senator Melaye’s 59,548 votes, the returning officer had said that he was constrained by law to declare a winner.

He explained that the margin of 20,570 votes between the two candidates was lower than the number of cancelled votes in 53 polling units of the 20 registration.

Following the victory of the APC candidate in the rerun poll and upon receiving the certificate of return, Senator Adeyemi will replace Senator Melaye as the lawmaker representing Kogi West senatorial district in the National Assembly.

INEC’s decision to conduct a fresh election in the senatorial district was in line with the order of the Court of Appeal in Abuja, which dismissed an appeal filed by Senator Melaye challenging the nullification of his victory on February 23. during the general elections.

Reacting to the outcome of the poll, APC National Chairman, Adams Oshiomhole, congratulated Senator Adeyemi on behalf of the party.

In a statement, he described the victory as “well-deserve” and thanked the people of the senatorial district for their support for the party and its candidate.

Read the statement below:

I congratulate our newly elected Senator, Smart Adeyemi on his well-deserved victory in the Kogi West re-run election which held today.

This victory has again affirmed the general acceptance of our great party, by the great people of Kogi State who just a few weeks ago voted massively for our governorship candidate,  Governor Yahaya Bello, who was re-elected for a second term.

I have always believed in the ability of the people of Kogi West to elect leaders who will make them proud in the Senate and not the defeated Senator Melaye who is among the 16  Senators who rebelled against our party.

As it stands today, the broom has swept away the entire 16 Senators, Dino being the last, who tried to destabilise our democracy for their personal interest, jettisoning the interest of the electorate.

On behalf of our great party the APC, I congratulate my brother and friend, Senator Smart Adeyemi once again and we look forward toward working with you in this resolve by our dear President, Muhammadu Buhari to take the nation to the NEXT LEVEL.

National Chairman of the APC