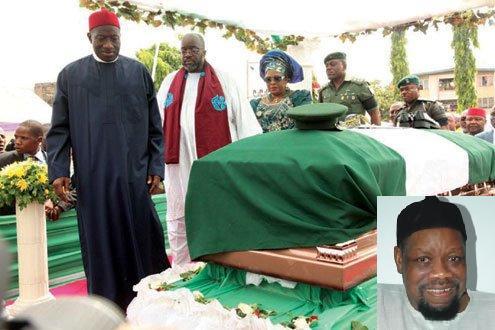 ONITSHA – The Biafra Independence Movement, BIM said yesterday that Ndigbo are being maltreated in Nigeria today because they forgot, at a point, that the late Ikemba Nnewi, Dim Chukwuemeka Odumegwu Ojukwu was the symbol, unity and rallying point of Ndigbo nay Biafra in general and were carried away by the sweetness of Abuja oil boom.

BIM observed that while the Igbo elites who are predominantly politicians are busy scrambling for crumbs from the masters’ table in Abuja, abandoning the Igbo course and clamoring for one Nigeria, our political office holders from other ethnic groups had the effrontery to be giving them all sorts of conditions that would not be beneficial to them.

Newly promoted BIM’s National Director for Special Duties and member Biafra Council of Elders, Chief Arinze Igbani who disclosed this in a press statement issued to newsmen in Onitsha, advised Ndigbo to come out enmasse on November 26 to celebrate Ojukwu’s 8th burial anniversary scheduled to take place at Ojukwu Memorial Library, New Owerri, Imo state where they would discuss a lot of things concerning Igbo agenda.

Igbani who warned that if Ndigbo abandon Ojukwu and Igbo projects for the leader of BIM, Chief Ralpha Uwazuruike alone, then their maltreatment and sufferings would continue unabated till thy kingdom come.

He therefore called on South East and South South Governors, Ohanaeze Ndigbo, market leaders, churches and other groups in Biafra land to note that anything concerning Ojukwu like the on-going struggle to actualize sovereign state of Biafra concerns everybody in Igbo land, by virtue of their birth, whether they like it or not.

He reminded Ndigbo that the Biafra struggle is for the well being,  fair living and betterment of all Igbo indigenes and as such needed a collective effort, as exemplified by Ojukwu himself, adding however that this time around, the struggle should be approached with peaceful method and no more violence or war which was tried without success.

According to  Igbani, “today, we are thanking Ojukwu’s successor, Uwazuruike whom he personally chosen when he was alive to accomplish the humble struggle and see to the freedom of all Biafrans as he mandated Uwazuruike to lead Ndigbo to the promised land which is Biafran home”.

“Ojukwu while handing over to Uwazuruike, instructed him to carry out this mission without violence or war since it was earlier tried without any achievement and in total obedience to Ojukwu’s instructions, Uwazuruike trudged on without using false information, lies, unnecessary propaganda, violence, blackmail or any other non-straight or insincere means since the struggle started on September 13, 1999”.