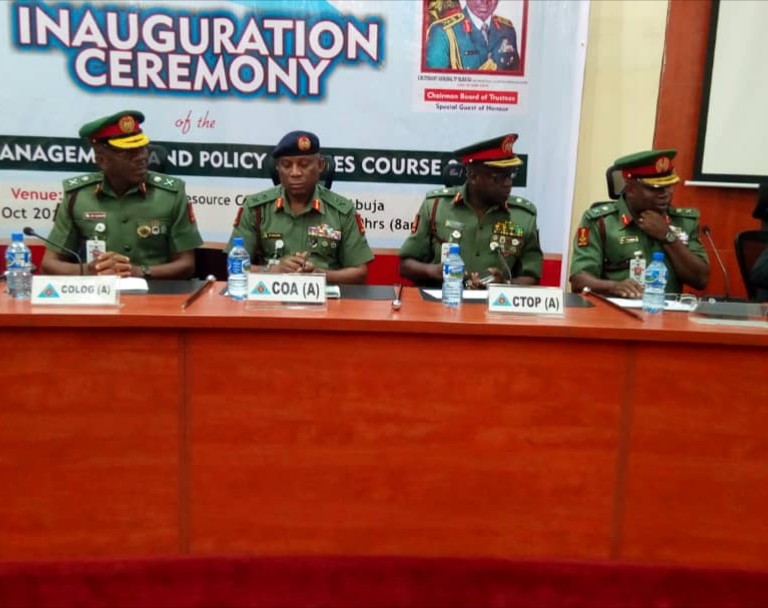 The Chief of Army Staff, Lt.-Gen. Tukur Buratai, has reiterated the commitment of the Nigerian Army to the capacity development of officers toward addressing the national security challenges.

Buratai revealed this while inaugurating the second edition of the Strategic Management and Policy Studies Course being conducted by the Nigerian Army Resource Centre (NARC) on Wednesday in Abuja.

He said that the objectives of the course was to examine security through other lenses other than the pure kinetic engagement that is peculiar to the military, adding that it was conceived as part of the human capital development mandate of NARC.

“As you may all be aware, the centre was established to proffer research based solutions to defence and security challenges facing the nation which also requires human resource development.

“The Nigerian army, as with its other mandates has risen to the challenge and has conducted the course with the seriousness it deserves.

“As part of the continuous upgrade, course 1 consisting of policy, management, entrepreneurship and research methodology was reviewed and increased to five to include Psychology in line with the objectives of the course and guidelines of the National Universities Commission (NUC).

“This is to place participants at par with similar courses in other parts of the world,” he said.

According to him, emphasis is not only on academics as other factors were considered given the peculiar target which is the entire security architecture of the nation.

“Thus, security which in itself has expanded beyond the old state centric dimension to now cover all human endeavour, is a major factor in this course.

“Consequently, factors like security and population explosion are given attention.

“I will enjoin you to strive and learn as no knowledge is lost,” he said.

He commended President Muhammadu Buhari for his continuous support to the armed forces in the area of training and capacity building of officers and pledged the unflinching loyalty of the army to the government.

Earlier, the Director General of NARC, Retired Maj.-Gen. Garba Wahab, said the course was part of the centre’s mandate of human resource development for the army and security agencies as well as other agencies of government.

Wahab said that the course had consistently met the NUC criteria, adding that those who possessed first degrees were awarded masters degree while those with diplomas are awarded postgraduate diploma in line with NUC policy.

According to him, the objective is to improve the intellectual excellence of the participants, examine security through a non-kinetic line of operation and improve inter-agency cooperation or collaboration.

The News Agency of Nigeria (NAN) recalls that the first edition of the course was concluded in August and the participants are expected to undergo 11 months intensive training at the centre.