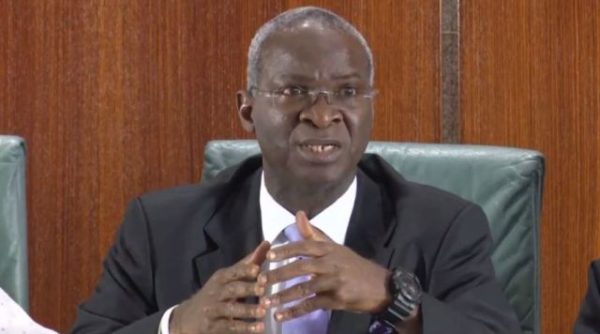 Minister of Works and Housing, Mr Babatunde Fashola has said that a total of 524 road projects were ongoing in the different geo-political zones in the country.

Fashola said this while addressing the House of Representatives Committee on Works chaired by Rep. Ahmed Birchi in Abuja.

The minister said there were four multilateral-funded road projects, 81 under the Presidential Infrastructural Development Fund and 45 others being funded under the Sukuk bond.

He said that the ministry was focusing on roads that open up the economy and contribute to the ease of doing business.

He added that “Nigeria would be back on its feet” if government could ensure that there was no failure on roads that stretched from ports to border cities.

“What remains is to finish; the real challenge for us and our recommendation is to adopt the policy statement of the president and focus on whatever resources we have towards completing as many of the those projects as possible.”

He added that a funding gap of ₦255 billion was required to “ideally” fund some of the major roads and stressed that the ₦157 billion 2020 budget allocation was inadequate.

On private sector investment in road projects, the minister, however cautioned that the government “must not play play politics” with such investment.

He also said that the ministry undertook a traffic count on strategic roads nationwide which supported the argument of the toll gate system on Nigerian roads.

“For the first time in 10 years, the Ministry of Works undertook a traffic count nationwide on strategic roads; we completed it in 2017.

“What you see (in the document) before you are reports; so where you see Average Daily Traffic (ADT), the top item on the far right is Enugu-Abakaliki and it shows ADT is 20,746 vehicles.

“The projected traffic in 20 years is what is under it and if you look through all those columns from the left, Lagos-Ibadan, Ogere North side the ADT there is reported as 25.1 thousand and projected to rise to 45,000 vehicles.

“This (document) provides more information for those who make the argument that if you toll the roads you get all the money.”

He added that the busiest road in the country was the Third Mainland Bridge with a vehicular traffic of 117,000 plus average daily traffic.

NAN reports that the Ministry of Works and Housing got the highest projected allocation of N262 billion from the N10. 33 trillion budget estimates presented by President Muhammadu Buhari to a joint session of the National Assembly on Tuesday.