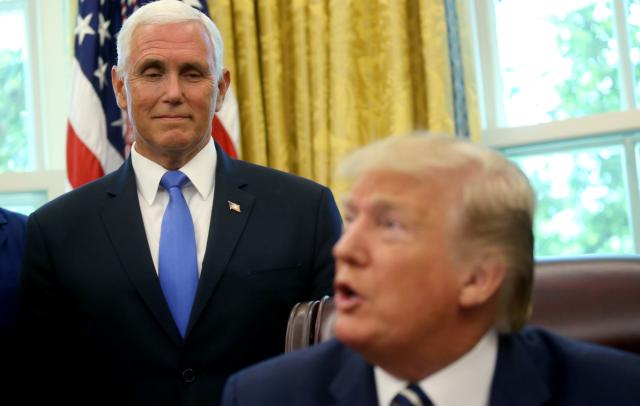 WASHINGTON — When Vice President Mike Pence flew to Europe as the stand-in for President Trump at the 80th anniversary of the start of World War II, it appeared to be another sign that the famously fickle president trusted his vice president.

But Pence’s decision while in Ireland to stay at the Trump golf resort in Doonbeg, the area his grandfather emigrated from a century ago, caught Washington insiders as another act of fealty from a vice president derided at times as overly obsequious, even “oleaginous.”

On the surface, Trump and Pence insist they have a great relationship and are working closer than ever to win reelection in 2020. (They’ve consistently beaten back rumors that former U.N. Ambassador Nikki Haley is in the running to replace Pence on the 2020 ticket.)

But behind the scenes, tensions have been mounting among Trump, Pence and their top advisers ever since the GOP’s resounding losses in the 2018 midterms. In the weeks afterward, Trump asked aides about replacing Pence on the ticket, and he asked again for their thoughts on Pence during his August vacation at his golf course in Bedminster, N.J., according to Trump advisers who spoke on condition of anonymity to talk about private discussions with the president.

Current and former Trump and Pence advisers interviewed for this story, as well as my forthcoming biography of Pence, “Piety & Power: Mike Pence and the Taking of the White House,” consistently described a personal relationship between Trump and Pence that is warm but somewhat aloof. Pence has a lane that he sticks to in the White House — conservative social policy — but he is not considered to be as influential as people like Jared Kushner or Stephen Miller.

But the relationship between their political teams has soured greatly in the past year, according to a dozen Trump and Pence aides and Republican advisers familiar with the dynamic. In particular, rumors that Kushner and Ivanka Trump wanted to consider replacements for Pence — specifically trying to find a woman running mate to help win back the suburbs in 2020 — have worried the vice president’s camp, according to Trump and Pence campaign advisers who spoke on background for this story.

However, none of those advisers claimed to have heard Kushner or Ivanka Trump directly discuss Pence’s replacement, and a senior White House official categorically denied the couple had been involved in discussing changes to the 2020 ticket.

“This story has been shopped in multiple forms to multiple media outlets but was never run by the others because the sourcing didn’t hold up or withstand scrutiny. It is false,” said the senior White House official when asked about the anecdote.

And one Pence adviser noted that Trump has repeatedly told the vice president that he has nothing to worry about, and that stories of him possibly being removed from the ticket are “fake news.”

Regardless of the rumor mill, there do appear to be tensions between the Trump and Pence camps.

“The perception is that Pence’s team is difficult to work with,” one Trump adviser said.

The adviser noted that, in his talks with Trump, the president has occasionally asked what the adviser thinks of Pence and his aides. “That just doesn’t come up organically. Somebody is saying that to the president,” the adviser said.

“There are certain pockets out there that want to solve their problems by replacing the running mate,” said the Pence adviser. “But we’re on the team. We might be JV, but we’re helping reelect him.”

The Pence adviser noted that Trump would automatically keep the support of “transactional evangelicals” — televangelists like John Hagee and Jerry Falwell Jr., heir to the Moral Majority founded by his father. But Pence is essential to keeping quiet, less political evangelical voters in the fold for Trump.

“Mike Pence is an exemplary vice president and has played a valuable role in the administration. He will also be a key asset as President Trump’s running mate in 2020,” Trump campaign communications director Tim Murtaugh said in a statement to Yahoo News. “At the staff level, everyone works together as one seamless team with a singular focus: the reelection of President Trump and Vice President Pence in November 2020.”

The vice president’s office did not respond to a request for comment.

As he returned from vacation, Trump beat back the idea. “I think Mike Pence has been an outstanding VP,” Trump told reporters in New Jersey shortly before boarding Air Force One. “I think that he has been incredible in terms of the love that a lot of people, especially if you look at the evangelicals and so many others, they really have a great respect for the vice president, and so do I. And so do I think most people.”

Kushner and Ivanka Trump, who have formed the political core of Trump’s reelection effort with campaign manager Brad Parscale, have sidelined Pence’s top political aides on the reelection — longtime fundraiser Marty Obst and former spokesman Marc Lotter — according to Trump campaign advisers. A Pence adviser noted that they have had some trouble working with Trump’s campaign during the past year.

In the spring, Pence’s aides went to Parscale to ask if he could include a question testing Pence’s favorability on a poll he was doing of battleground states, according to Trump campaign advisers familiar with the request. Parscale said it was too late to add the question to the poll — but what he didn’t tell Pence’s aides is that the question was already on the poll, done in 14 states. When the results came back, Pence’s favorability was higher than Trump’s — something Parscale and the campaign’s pollsters withheld from Trump and Pence. But Obst, Pence’s chief political aide who also works as a senior adviser on the Trump campaign, used a mole inside the president’s campaign to get a copy of one of the polls.

Haley inflamed those tensions two weeks ago when she tweeted her insistence that she would never replace Pence on the ticket and fully supported Pence and Trump. And even though Pence’s advisers are fairly sure the vice president will make it onto the Trump ticket in 2020, they aren’t 100 percent certain — which has led some Pence advisers and friends to chafe at Trump’s treatment of the vice president.

They see Trump keeping Pence on a tight leash — leveraging the uncertainty over 2020 to get him to pass “loyalty tests” for Trump.

One Pence confidant bemoaned Pence’s cancellation of a New Hampshire trip at the start of July and subsequent trip to a border detention camp as examples of Trump yanking on Pence’s leash. This was before it was reported widely the New Hampshire trip was canceled because Pence would have appeared onstage with a former New York Giants player accused of smuggling opioids.

A few weeks later in July, members of the Republican National Committee gathered in Charlotte, N.C., and chattered about what would become of the vice president. Pence had long been sold as a stable force in Trump’s orbit, helping to bring weary Republicans into the fold in 2016 and beyond — and he remains a popular figure with the RNC.

“He’s on a tightrope,” said one RNC member who helped secure Pence’s place on the Trump ticket in 2016 and is trying to ensure he stays there for 2020. “If he takes Mike Pence off the ticket, that would just be despicable.”

The RNC member said that Pence’s team appears worried about the relationship with the president. “People come into the VP’s office trying to find out what’s going on with Trump, and he can’t give them an answer,” the member said.

One former adviser to Trump and Pence noted that Trump would more warmly embrace the vice president in public if Pence simply announced that he wasn’t planning a run for president. Trump, the former adviser noted, hates aides who display more ambition than him.

“All of this would go away if he announced he wasn’t running for president in 2024,” the former adviser said.

Tom LoBianco is the author of “Piety & Power: Mike Pence and the Taking of the White House,” one of Time magazine’s “42 Most Anticipated Books of Fall 2019.” He is a longtime reporter who has covered Mike Pence from the statehouse to the White House for the Associated Press, CNN and the Indianapolis Star.