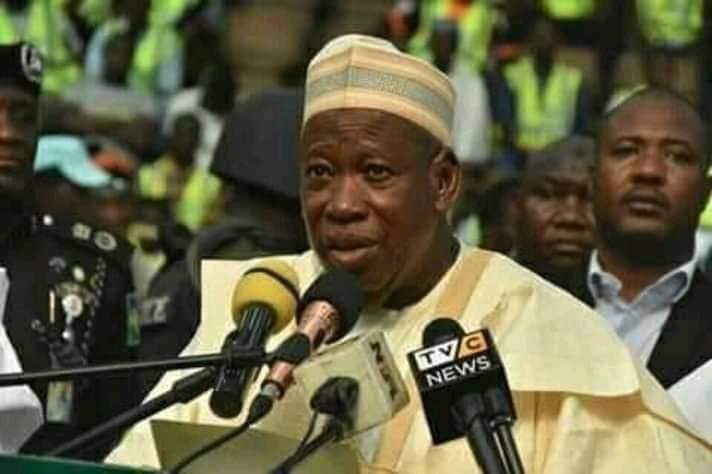 As he flags-off Military training in Falgore forest

To further address the lingering issue of Ruga settlement across the nation, to purposely improve peace and security in the country, governor Abdullahi Umar Ganduje of Kano state, has earmarked over Three Hundred Million Naira (N300m) to provide dormitories and other facilities needed for military training and grazing ground for herders.

He said “Over N300m is earmarked to provide some dormitories and other facilities for the military, so that we get permanent use for military exercise in Falgore forest. To also get other facilities needed for the herders, so that we can have grazing ground for our Fulani herders.”

He made the disclosure at he Flags-off the occasion of Military Medical Outreach that took place at Gada Biyu town of Doguwa local government, for the 78 Regular Recruits Intake,  named Ex Kun Gama, in Falgore forest, which took place Wednesday.

Governor added that, “It is informative that Kano is secured because of the coordination among all our security agencies. We are spending that sum of money so that we can make the military exercise to be a permanent one. While our herders would have good grazing ground also.”

With this  is place, Ganduje hopes, bandits would not have any chance to inhabit the forest, adding that, “With this I can assure you that we don’t have robbers, bandits, kidnappers and other form of criminals.”

Community policing, according to Ganduje plays an important role in the peaceful atmosphere the state is experiencing.

Emphasising further that, “I am happy that the Army is conducting this Medical Outreach in the host community. This is a good omen, because it can help in promoting cordial relationship between the Army and civilians.”

In his remarks, the Chief of Army Staff, General Tukur Buratai, who was represented by Major General Enobong Udoh, Chief  Training and Operation Nigerian Army, says the occasion was to “…further enhance the existing cordial relationship between the Nigerian Army and the good people of Gada Biyu and environs in Doguwa local government area.”

He urged communities not to relent in offering assistance to the Army, particularly through providing useful information to them.

Noting that, “…this Medical Outreach by Depot Nigerian Army has demonstrated it’s resolve to continually key into my Directive for all Nigerian Army formations, Units and indeed all Nigerian Army Establishments, to maintain a robust civil-military relationship in line with international best practice.”

Buratai commended Ganduje that, “I wish to particularly thank His Excellency, the Governor of Kano State,  Alhaji Abdullahi Umar Ganduje for finding time to be here in person. I have no doubt in my mind that your presence has added colour to today’s event.”