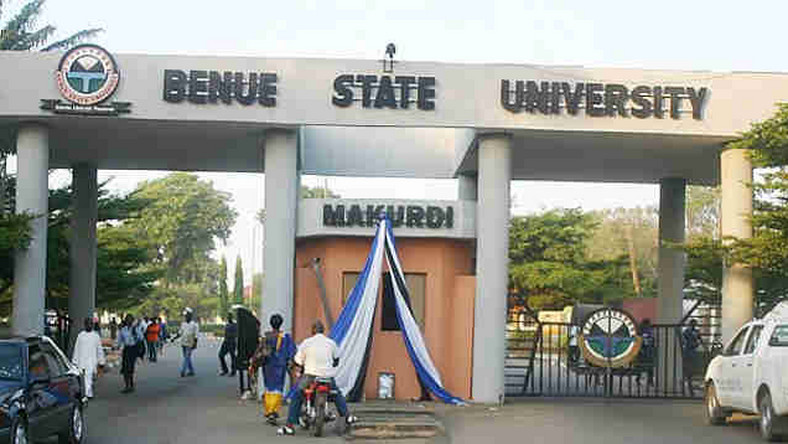 Following protests by students of the Benue State University (BSU), Makurdi, on Monday, 2nd of September, 2019, management of the institution has shut the school.

The Vice Chancellor of the University, Prof. Moses Msugh Kembe stated this in a press release signed by the school’s registrar, Dr. Mfaga Modom and made available to newsmen in Makurdi.

The statement said “following the closure of all the University entry gates by students on Monday, 2nd September, 2019,  despite all entreaties by the management, the VC/Chairman of Senate, on behalf of the Senate of BSU has approved the closure of this University with immediate effect to avoid further break down of law and order in and around the university campus.”

The students, as early as 6am, had blocked all the school gates to prevent staff or students from entering the school, demanding that management revert feom its currwnt 4 point grading system to 5 Point Grading System.

Their spokes person, Mr Kingsley Obora said they were demanding immediate implementation of the 5 point grading system as directed by the NUC.

“The protest today is simple. Students are tired of dialoguing with management concerning the issue of 5 Grading Point System. We have used almost a year to dialogue with management on this issue and we feel this is the only way  for they can hear us.

“We want them to hear our cry. If we don’t do this, most of our students will be withdrawn from school. We want management to revert to the grading system that other Universities are grading on already,” Kingsley said.

The students expressed fear that if the students are graded on the current 4 point grading system as it is insisting, majority of the students will be withdrawn because of poor, Cummulative Grade Point Average, CGPA.

“Four point grading system only have advantage for first class. In 4 point grading there is no pass degree. As it stands, so many people have been withdrawn. If you go to Economics Department, over 100 students have been withdrawn, Sociology have already sent their children home. If you go to Sociology, the least person has 0.37 CGPA on 4 point grading system, where as when you convert it to 5 Point, that person will be on 1 point which is pass degree. All we are asking for is go back to 5 Point grading point,” One of the Department leaders,  Moses cried out.

“The Committee requested and received memoranda from the University community including the Students; met severally and its report is to be considered at the forthcoming meeting of Senate scheduled for Thursday, 5th September, 2019.

“Students must acknowledge the fact that the University had already complied with the directive by the National Universities Commission (NUC) by reverting to the 5 Point Grading System with effect from the 2018/2019 academic session.

“In the interim, the University Management met the students and informed them of the efforts of Senate and appealed for their patience to enable the Committee to complete the assignment. Management also, through the Dean of Students issued a circular informing the students of its efforts.

“The closure of the University gates by students on account of this issue is therefore unwarranted and Management wishes to reiterate that it can only consider their appeal when the report of the Senate Committee is received.

Prof. Kembe appealed to the students to be law abiding and respect constituted authority, policies and properties of the University and allow due process to prevail saying management wishes every student to note that it cares for their academic success and will never deliberately distort their academic performance and results.