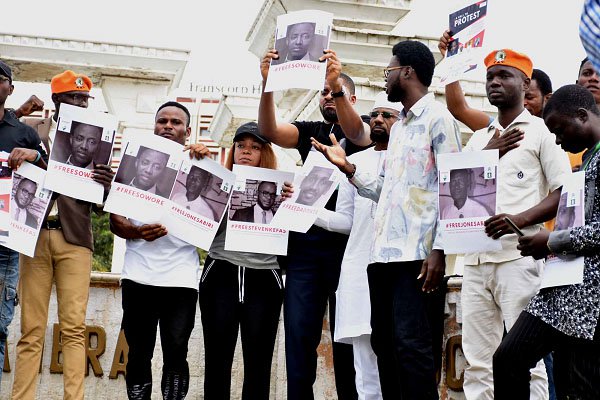 Protesters yesterday in Wednesday, at the nation’s capital, demanded the release of former presidential candidate of African Action Congress (AAC) in the last general elections and Convener of #RevolutionNow protest, Omowole Sowore.

But truckloads of security operatives at the Unity Fountain, venue of the protest, prevented them from entering the area.

The Unity Fountain was a semblance of a war zone with heavy presence of soldiers, policemen, operatives of the Department of State Services (DSS), Nigerian Security and Civil Defence Corps (NSCDC) and officers of Nigerian Prison Service.

Sowore, who is also the publisher of Sahara Reporters, was arrested by DSS operatives last week after he vowed to mobilise Nigerians to the streets for the #RevolutionNow protest.

The Federal Government has also used the DSS to secure a Federal High Court ex parte order to detain him for 45 days.

Despite the barrage of security operatives at the Unity Fountain, activists demanded the immediate release of Sowore and other “prisoners of conscience”.

The protesters, led by Deji Adeyanju, the Convener of Concerned Nigerians (CN), said President Muhammadu Buhari’s administration had  continued to imprison Nigerians who dared to criticise his “maladministration” and had no deference for divergent opinion.

Adeyanju, who said proponents of #FreeSowore protest would not be cowed by government’s battalion of security operatives, added that the President pretended that he was a repentant democrat to get the confidence and votes of Nigerians.

He said Sowore, Dadi Yata, Jones Abiri, Steven Kefas and other social and media critics held by the present administration as prisoners of conscience, represent uncountable numbers of other Nigerians he called victims of Buhari’s government.

According to him, even if the President withdraws all the security operatives deployed to fight insurgency in the Northeast and other parts of the country to stop the #FreeSowore activists, the protest will not stop.

Another activist Rapheal Adebayo said even if President Buhari arrests more protesters, one million others would fight his policies.

Adebayo added that the protest was not just for the freedom of Sowore and other “prisoners of conscience” but for the soul of Nigeria.

Also, Middle Belt Forum’s Deputy President Ndi Kato said the protest would be sustained until the government learns to respect the will of the people.