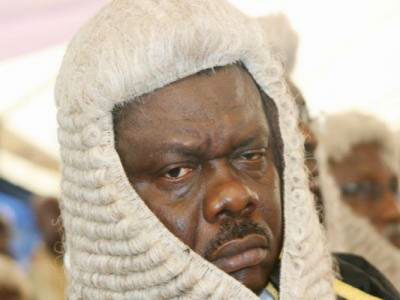 A group of Nigerians, on the platform of Global Integrity Crusade Network (GICN) have petitioned the Economic and Financial Crimes Commission (EFCC), demanding that a former Attorney-General of the Federation and Minister of Justice, Michael Kaase Aondoakaa, SAN be arrested and prosecuted within the next seven days.

The petition addressed to the Chairman of the EFCC, dated Tuesday, 13th August, 2019, with the title “Pending allegations against Mr Micheal Kaase Aondoakaa, SAN bordering on fraud, corruption, flagrant abuse of his office as Attoney General of tge Federation and Minister of Justice between 2007 to 2010 as well as involvement in the $182 Million Halliburton scam,” was signed by GICN’s director of special duties, Akan Augustine Eneji.

According to the petition, In the year 2010, Mr. Aondoakaa was stripped off the prestigious rank of Senior Advocate of Nigeria (SAN) by the Legal Practitioners Disciplinary Committee on the strength of several petitions written against him for unethical actions taken while serving as Attorney-General of the Federation.

The petition, a copy obtained Thursday in Abuja reads: “We recall with bitterness how Aondoakaa being a close associate of James Ibori, the disgraced former Governor of oil-rich Delta State, worked openly to undermine the independence of the EFCC and to derail domestic and international efforts to bring Ibori to justice. His strong-arm tactics and near usurpation of the powers of the Commission earned him considerable notoriety.

“Available information shows that he interfered in many of the EFCC prosecutions and destroyed cases relating to corrupt State Governors mostly by discontinuing hearings and trials – even without clear power to do so. In one such instance, it happened that after the EFCC appealed a decision by the Court of Appeal transferring the case to Ibori’s home State – where Ibori still wielded enormous influence – the Attorney-General ordered that the appeal be withdrawn.

“Mr. Aondoakaa is also alleged to have interfered in the money laundering case against Ibori and his associates in the United Kingdom. After an English court froze $35million of Ibori’s assets in August 2007, Mr. Aondoakaa provided Ibori’s lawyer with a letter stating that Ibori had been “investigated” in Nigeria and no charges had been filed against him, despite the fact that the EFCC was still investigating the case and finalizing criminal charges. The letter led the English court to temporarily lift the freeze on Ibori’s assets.

“According to leaked US State Department cables, Mr. Aondoakaa also refused to negotiate a broad prisoner transfer agreement with British authorities unless the United Kingdom dropped efforts to prosecute Ibori for money laundering.

“We are aware that the EFCC in November, 2016 invited and quizzed Mr. Aondoakaa for several hours over his alleged role in the $182 Million Halliburton scam. The case into which he was frustrating investigations during his time in office relates to an alleged contract involving a four-company joint venture to build a liquefied natural gas plant on Bonny Island.

“It is on record that in 2009 one KBR, a former subsidiary of Halliburton, agreed to pay $402 Million after admitting that it bribed Nigerian officials through office of the Attorney-General and that Halliburton paid $177 Million to settle allegations by the US Securities and Exchange Commission without admitting any wrongdoing. It is our demand that investigations into this very sensitive case be reopened as a matter of urgency with a view to arraigning Mr. Aondoakaa before the court.

“This will go a long way in proving to the overwhelming population of Nigerians who stand on the path of justice that the EFCC is truly committed to tackling the menace of corruption headlong, no matter who gets offended.

“It is rather unfortunate that Mr. Aondakaa has continued to walk the streets as a free citizen and strengthening his hands in Benue State politics instead of cooling in the prison. We maintain that the inordinate delay on the part of the EFCC to arrest and prosecute Mr. Aondakaa over the aforementioned Halliburton scam is an attempt at shielding him. Our consolation however lies in the fact that there is no limitation to criminal prosecution in Nigeria. Given your commitment to duty, we believe that the arms of our laws are long enough to bring any criminal to book.”

While giving seven days ultimatum to arrest and begin prosecution of the former AGF, the group said: “We do not want to have a negative notion that some persons are above the law under your leadership of the EFCC. Therefore, we unequivocally demand that you act urgently by arresting Mr. Aondakaa and commence the process of his prosecution within 7 (Seven) working days from the date of receipt of this letter. In the event that you do not act as demanded herein, we shall further ventilate our grievances by jumpstarting mandamus proceedings to compel you to do the needful.”