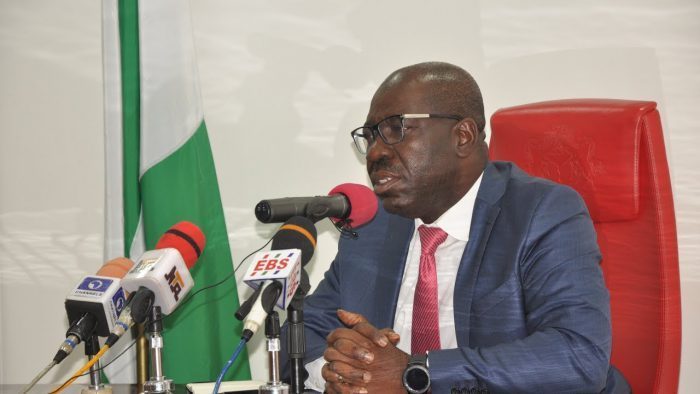 Edo State Governor, Mr. Godwin Obaseki, has apologised to the aggrieved members over the unfair treatment meted to them when they indicated interest to contest in the 2019 All Progressives Congress (APC) primary elections in the state.

He disclosed that “almost 20 court cases arose from those who were deprived of the opportunity to contest fairly for the ticket of the party,” he said.

The action is part of recommendations by the Theophilus Okoh-led committee, which was set up to reconcile aggrieved members of the party in the state.

He thanked them for keeping faith with the party, despite their disaffection, which he said showed that they are true loyalists of the party.

“After reading the Okoh-led Committee Report and watching the videos, I really appreciate you all. We are truly sorry for what you may have gone through during the 2019 primary elections. This meeting is the starting point for reconciliation of aggrieved members of the party,” he said.

The Governor who said that the meeting was part of the reconciliation process the party has adopted to resolve the issues in the party, explained that it became necessary to bring all aggrieved members of APC together to resolve all the issues causing the crisis.

He noted that his administration was reviewing each case at a time, to refund money spent in purchasing interest forms by the members.

According to him: “To build trust, confidence and demonstrate that we truly want to reconcile the aggrieved members of our party, within a week of receiving the Okoh-led committee report, we called for this meeting to talk to our aggrieved members.

“Anyone who already has an appointment or someone who is likely to benefit from the APC is not expected to get refund but same can’t be for someone who has not received anything.

“I call on you all to join hands together with this administration to build the APC as a party in the state in a fair and transparent manner. We are proud of our achievements as a government.”

One of the aggrieved members, Barr. Evbu Igbinedion, called on the Governor and members of the party in the state to ensure that female members are given the needed support to win elections.

She noted that “females are more committed and loyal party members but are sidelined resulting in failures during elections. Today, there is no woman in the Edo State House of Assembly.”

Another member, Anavberokhai Isah, “urge party leaders to adopt zoning system across the state for various positions as it will discourage aspirants from buying forms when such position is not zoned to their area.”

A leader of the APC, Charles Idahosa, urged the aggrieved members of the party to forget the past and join hands with Governor Obaseki “to defeat evil forces that want to truncate development in the state.”