Peoples Democratic Party, PDP, youths in the Southwest, under the
aegis of PDP Youths Congress, PDPYC have said that Speaker of the
House of Representatives, Femi Gbajabiamila has been instructed by a
leader of the All Progressives Congress, APC to begin the suspension
of some notable PDP Reps members next week.

The youths warned of the consequences of President Muhammadu Buhari’s
silence in the face of flagrant lawlessness and authoritarianism being
perpetrated by his party leaders in collaboration with Speaker of the
House of Representatives.

Rising from its monthly meeting held in Ado Ekiti on Sunday, the
Convener, Comrade Oluwole Durojaiye, in a release alleged that a
meeting was held in Abuja on Friday night where Gbajabiamila was
instructed by a certain leader of the APC to flush out about ten PDP
members who are seen as arrowheads of the opposition against the
illegal appointment of Minority Principal Officers by the Speaker.

The PDP youths, who disclosed that another meeting will be held in
Ibadan, Oyo State in two weeks time, added that Nigerians should
recall that the PDP sent a letter dated June 21, 2019 to the Speaker
on on June 26, 2019 in which names of minority principal officers were
listed. Gbajabiamila however ignored the letter and announced other
members as minority principal officers, an action which caused uproar
in the House on Wednesday.

The PDP had responded yesterday, by suspending Hon. Ndudi Elumelu,
Hon. Wole Oke, Hon. Lynda Ikpeazu, Hon. Anayo Edwin, Hon. Gideon
Gwadi, Hon. Toby Okechukwu and Hon. Adekoya Abdul-Majid, on the ground
that  preliminary examination by the National Working Committee showed
that the roles played by them in the House of Reps minority principal
officers’ issue bordered on indiscipline, insubordination and
disobedience of party directives contrary to Section 58
(1)(b)(c)(f)(h) of the PDP Constitution (as amended in 2017). 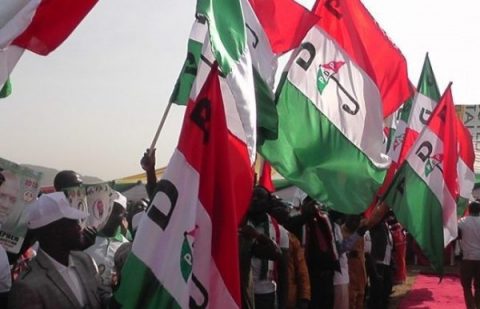 Calling on President Buhari to stop playing ostrich to lawlessness
being perpetrated in his name, the PDP youths pointed out that
Nigerians with one day ask questions as to what took place under him
as President.

Therefore, if in a Federal Government headed by President Buhari, a
man who claims to have integrity, a Speaker of the House of
Representatives, who allowed APC to chose its majority principal
officers but disallowed PDP from doing same, is now being directed to
suspend notable members of opposition in the House, Nigerians are
watching.

President Buhari should remember that those party members of his that
are perpetrating crude illegalities all in the desperate bid of a
certain leader of the party to be President in 2023, will not be
mentioned in future. Only the President will be mentioned when in
future, Nigerians will make reference to whatever that is done now.

Today, when making reference to those who ruled Nigeria in the past,
no one will mention the names of those who worked with them and on
this House of Reps issue, only the name of Buhari will be mentioned in
future as both the President and leader of APC under whose rules of
the House were violated and members threatened by a Speaker who is
fast becoming a dictator.

Therefore, as an elderly person, who should be making restitutions for
whatever he had done wrong in the past, President Buhari should safe
his name and do the right thing during this second term, so that in
future, Nigerians will remember him for good and not as a President,
under whose impunity and disregard for laid down rules reigned
supreme.