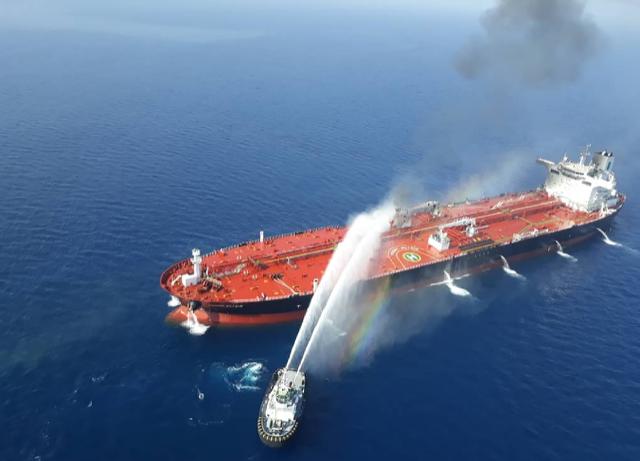 Dubai (AFP) – Amid an intensifying war of words following dual tanker attacks in the Gulf, Iran is not seeking open conflict with the United States but is sending a warning to Washington, analysts say.

Tensions around the Gulf shipping channel, vital to the transportation of crude, soared after two tankers came under attack early Thursday, with the US quickly blaming Iran for the incidents.

“(Iranian supreme leader Ayatollah Ali) Khamenei and the Iranian Revolutionary Guard Corps are rational actors — despite how some portray them — and they will not want, unduly, to invite Iran’s annihilation,” said Middle East analyst and author Neil Partrick.

“However, as ever the danger of escalation through accident, design, or both, remains,” he told AFP.

“The skill involved in yesterday’s oil tanker attacks suggests that this is something more sophisticated than, for example, the Iranian-supported Yemeni Huthi (rebels) could muster.”

US President Donald Trump insisted that Iran “did do” whatever led to fires aboard the two tankers.

But Iranian Foreign Minister Mohammad Javad Zarif tweeted that the US had “immediately jumped to make allegations against Iran without a shred of factual or circumstantial evidence”.

The two vessels, one of them Japanese, came under attack around the time Japanese Prime Minister Shinzo Abe was meeting with Iranian leaders in Tehran.

For Partrick, the idea that Iran would want to “directly undermine” Abe’s visit “and give a gift to Iran’s US and Gulf enemies, by engineering such a substantive attack must be in doubt.”

Also sceptical, Verisk Maplecroft analyst Torbjorn Soltvedt said: “Ascribing a clear reason why Iran would seek to disrupt tanker traffic in the Gulf of Oman is difficult at this stage.”

“The most likely is that Iran is sending a message to warn the US and its allies in the region that it has the ability to retaliate against tightening energy sanctions.

“But it is also possible that hardliners in Iran are seeking to damage the prospects of any renewed talks between Tehran and Washington to ease tensions,” said Soltvedt.

Relations between Tehran and Washington soured significantly when Trump refused in October 2017 to re-endorse the deal agreed between global powers and Iran to contain the Islamic republic’s nuclear programme.

The US subsequently re-imposed a raft of economic sanctions which Tehran has angrily denounced as “economic warfare”.

The United States also accused Iran over May 12 attacks on four tankers anchored in the Gulf of Oman off the United Arab Emirates port of Fujairah.

An international investigation stopped short of conclusively blaming Tehran for the incidents.

Partrick suggested that by aggressively blaming Iran the US may have “paradoxically” limited the risk of further damage to oil exports, because Washington has “increased its deterrence capability through rhetoric”.

Oil prices jumped at the threat of open conflict around the Strait of Hormuz, the chokepoint between the Gulf and the Gulf of Oman, through which some 15 million barrels of crude pass daily.

Karen E. Young, a resident scholar at the American Enterprise Institute, warned that “we can expect further incidents, rather than attributable state-on-state attacks”.

“Neither the Gulf Cooperation Council states nor Iran want a direct military conflict,” she said, referring to the six-nation regional grouping of Arab states.