Madam Ekioukere Foster hails from Bayelsa State but resident in Bomadi, headquarters of Bomadi Local Government of Delta State. A few weeks ago, she was among thousands of beneficiaries of starter packs distributed by the Presidential Amnesty Programme to empower residents of communities impacted during the Niger Delta crises. Since luck visited her through the Special Adviser to the President on Niger Delta and Coordinator, Amnesty Amnesty Programme, Prof. Charles Dokubo, the 57-year-old woman has been consumed by joy and a burning zeal for a new life fired by hope.

Ekioukere shares same fate with several Niger Deltans including the aged, youth, men and women. While beneficiaries of the Amnesty Programme are savouring a new dawn, residents of communities in the Niger Delta region have also invested a balloon of hope in the Programme propelled by Prof. Dokubo’s passion for work and commitment. And they hold belief that their optimism is not misplaced.

Wednesday March 13, 2019 marked Dokubo’s one year in office, a period characterized by fresh initiatives and events that has put smiles on the faces of not only beneficiaries of the Amnesty Programme, but on their parents, brothers and sisters. For close watchers of activities at the Amnesty Office, that the Abonnema, Rivers State-born erudite professor of international repute and nuclear scientist recorded tremendous achievements within a period of one year was not surprising as he set out to pilot the Amnesty Programme on full throttle. 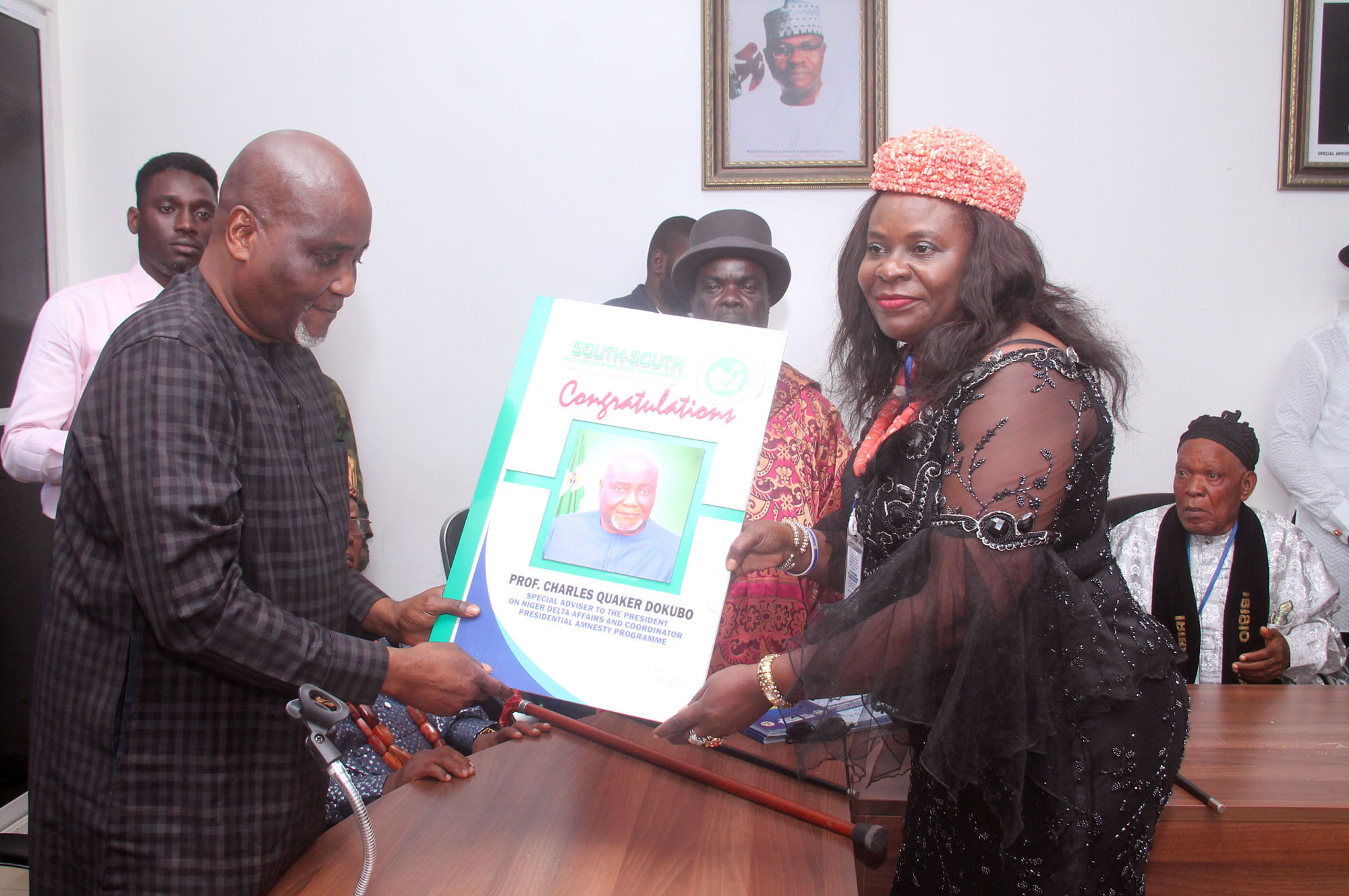 On assumption of office in March 2018, Dokubo engaged critical stakeholders in the Niger Delta in consultative meetings geared towards deepening peace in the volatile region. Apart from key leaders of ex-agitators, he also met severally Niger Delta elders, elders and stakeholders in Lagos. Among critical stakeholders who attended some of the meetings were Chief Bibopre Ajube, aka General Shoot-at-Sight; Dr. Ebikabowei Victor Ben, alias Boyloaf, and a representative HRH Ateke Tom. Representatives of other frontline leaders of ex-agitators in the Niger Delta including Chief Government Ekpemupolo alias Tompolo, also attended.

On June 7, 2018, he met with over 30 Phase One leaders of Niger Delta ex-agitators at the Abuja Sheraton Hotels and Towers in furtherance of his peace efforts, and parleyed 70 Phase Two and Three leaders the next day at same venue. He had earlier hosted the leadership of the Pan Niger Delta Forum (PANDEF), and visited a former Federal Commissioner for Information and respected Ijaw leader, Chief Edwin Clark, in his determination to deepen peace in the Niger Delta.

As a first step after mounting the saddle, Dokubo constituted a committee headed by a university teacher, Prof. Ayibaemi Spiff, to review operations of the Amnesty Programme. Part of the findings of the committee was that while the Amnesty Office had undertaken the construction of five Vocational Training/Reintegration Centres across states in the Niger Delta, however, even when two of the centres (in Ondo and Bayelsa States) were near  completion, had been activated for the training of thousands of persons enrolled on the Programme that are yet to be skilled due to the failure of the Amnesty Office to pay in full the contract sums, lack of proper supervision and demand for variation by some of the contractors.

Interestingly, of the 30,000 persons enlisted in the Presidential Amnesty Programme, 11,297 persons are yet to be placed in either vocational training facilities or deployed for formal education as of when Dokubo assumed office.

Propelled  by the fact that the success of the Reintegration component of the Amnesty Programme depended largely on the Re-insertion part of it which entails aiding processes of returning already trained ex-agitators to civil society, Dokubo has took bold steps on empowerment, through the provision of start-up packs and mentoring for several already trained and qualified ex-agitators to become entrepreneurs. In this regard, 1,165 already trained beneficiaries of the Amnesty Programme were empowered in various trade areas within his one year in office.

In the area of education, 1,230 beneficiaries of the Programme were offered scholarship and deployed in 11 partnering institutions within the country between January 30 and 31, 2019, while about 35 are set to be deployed to various institutions offshore.  207 students spread across 66 institutions in 20 countries are currently studying various courses. On Thursday, July 19, 2018, he visited students sponsored by the Amnesty Programme in London and met with 47 students and recent graduates from 25 institutions in the UK at the Nigeria High Commission. The objective of the visit was to enable him evaluate the students’ academic progress, celebrate those completing their programmes and charge the remaining ones to be good ambassadors of the Programme.

Determined to facilitate job placement for beneficiaries of the Amnesty Programme, Prof. Dokubo created a Job Placement and International Development Partners Engagement Unit (JPIDPEU) on May 2, 2018. So far, the unit has profiled 28 delegates for underwater welding jobs in oil servicing companies; 100 delegates for civil service jobs and 10 delegates for aviation crop spray pilot jobs. It has also concluded profiling of 25 delegates for catering services, hotel and fast food jobs and 75 delegates for other job opportunities.

This is just the beginning of an action plan of the Post Training Engagement and Job Placement units of the Amnesty Office for the next two years. Besides, a DFID funded project –to MADE (Market Development in the Niger Delta), is sponsoring a training for trainers programme for 20 beneficiaries of the Amnesty Programme in Agricultural Extension.

At the launch of the training on Tuesday, February 16, 2019 in Uyo, Akwa Ibom State, Dokubo said his vision of creating a Job Placement and International Partners Engagement Unit (JP-IDPE) last year has started yielding results. While describing the Train the Trainer (ToT) programme on Nigeria Agricultural Enterprise Curriculum for 20 graduate beneficiaries of the Amnesty Programme as historic, he noted that the partnership project was the first of its kind in the Amnesty Programme and expressed optimism that it will create pathways for other international agencies to partner the Amnesty Office. 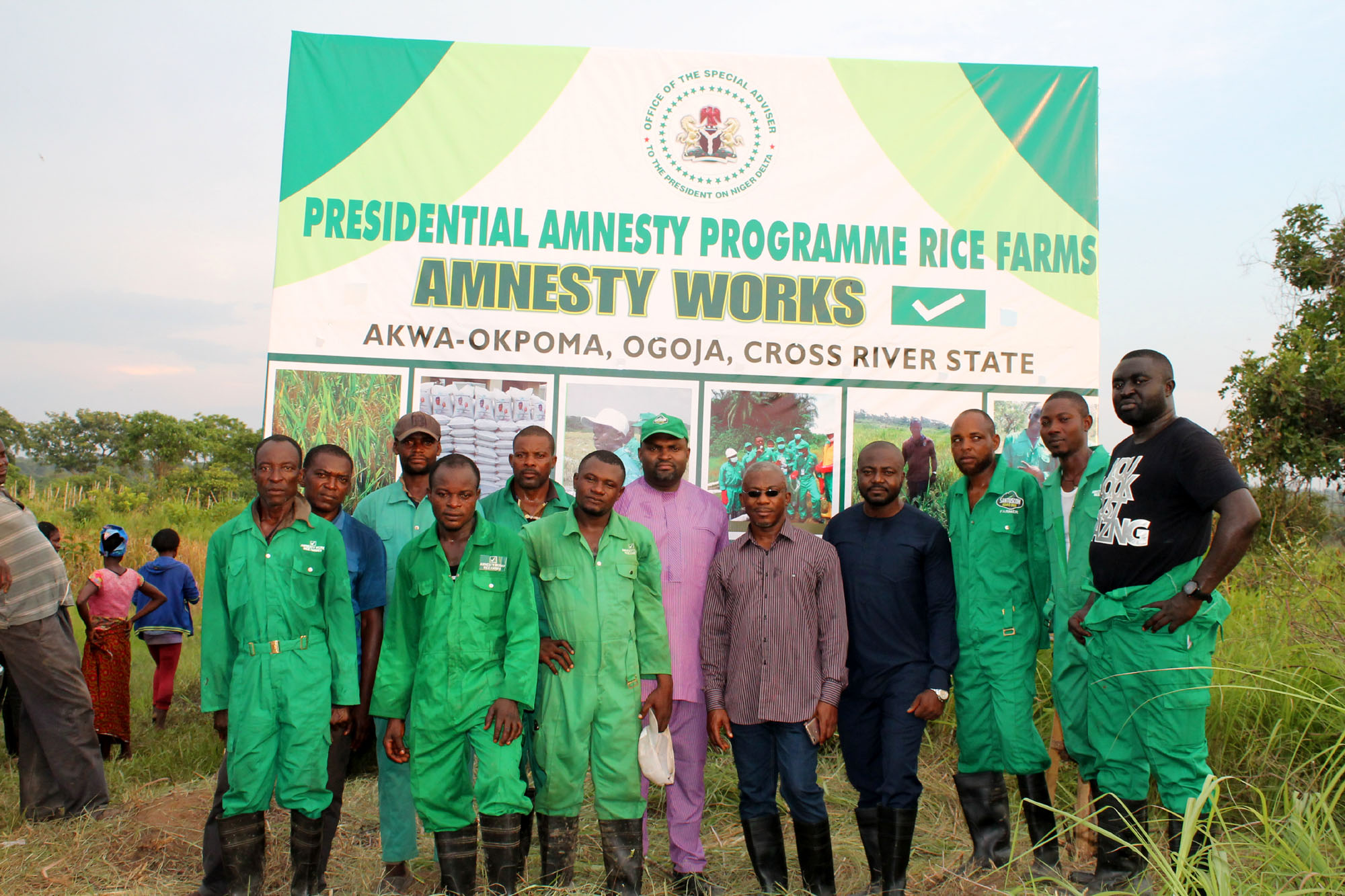 “On my appointment and assumption of duty as Coordinator of the Presidential Amnesty Programme in 2018, I studied the existing implementation strategies and realized that little effort had been made to extend a hand of partnership to relevant international organizations. In order to rectify this omission, I created the Job Placement and International Development Partners Engagement Unit on May 2, 2018. I am glad that my vision has paid off today. The JP-IDPE unit network produced this MADE project that we see today and we look forward to having more of it”.

Recently, the Director General National Agency for Food and Drug Administration and Control (NAFDAC), Prof. Moji Adeyeye granted approval for the Amnesty Programme to use 23 Technology Incubation centres allocated to the office by National Board for Technology Incubation (NBTI) for cluster manufacturing by beneficiaries of the Programme. The centres would be used by delegates to produce their products for the purpose of obtaining NAFDAC Registration numbers. The delegates have been trained on production of rice, garri, plantain-flour, plantain-chips, chinchin, smoked fish, chicken, snail and fruit juice production, among others.

On his path to charting a new course for the Amnesty Programme, Dokubo has surmounted several obstacles by sheer determination. And the tonic required to motive him is the support and encouragement from critical stakeholders and other quarters which he doesn’t lack. For Chairman of the Senate Committee on Niger Delta, Senator Peter Nwabushi who spoke at the commissioning of the Oil and Gas Basic Skills Vocational Training Centre, Agadagba-Obon, Ese Odo Local Government Area of Ondo State, Dokubo deserve commendation for his prudent management of funds allocated to the Amnesty Programme and his transparency.

“The Presidential Amnesty Programme which was established in the year 2009 has had four chief executives as Special Advisers/Coordinators. Of all the four, I can confidently say that the present Coordinator has been very proactive and eager to realize the mandate of the Programme…In his short time in office, he has really demonstrated capacity to transform the Niger Delta region for sustainable development. Our committee is very pleased with his efforts; he is a square peg in a square hole”.

While the Director of Research at the National Institute for Policy and Strategic Studies (NIPSS), Kuru, Plateau State, Prof.  Habu Galadima says Dokubo has provided the needed strategic leadership towards actualizing the objectives of the Presidential Amnesty Programme, the ruling All Progressive Party (APC) gave him kudos for deepening peace and stabilizing the Niger Delta. In a letter of commendation signed by its national secretary, Mai Mala Buni, the APC applauded Dokubo’s efforts at ensuring development in the oil-rich region. It said the positive transformation of the Presidential Amnesty Programme was in line with the Change Agenda of President Muhammadu Buhari’s administration.

But for Dokubo, the glory goes to the Almighty God and to President Buhari who has been a pillar of support for the people of Niger Delta. “Let me place on record that we are able to achieve all these because of the staunch and unalloyed support President Muhammadu Buhari has been giving the Amnesty Programme and the Niger Delta as a whole. On his fatherly watch, we have since re-worked the Programme to focus on not just training but also job creation and empowerment of already trained beneficiaries. I can confirm to all stakeholders gathered here today that President Buhari loves the Niger Delta and its people”.