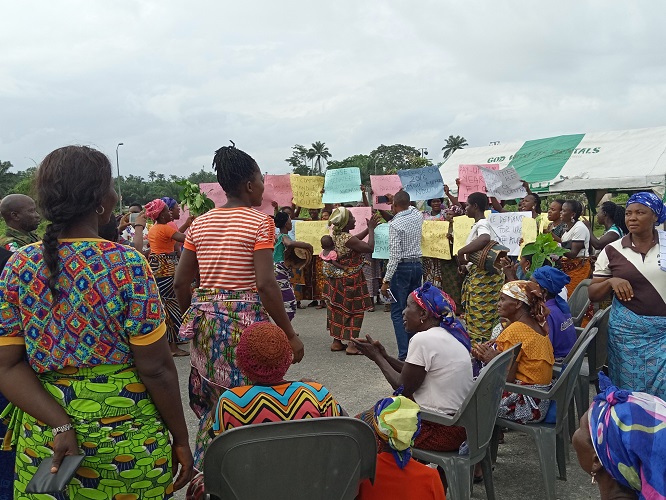 Protesters from some host communities to the Oil Mining Lease (OML30) on Tuesday blocked entrances to the premises of the Ughelli Pump Station in Eruemuko Kwarien, Ughelli North Local Government Area of Delta.

The protesters, mostly women and youths vowed to continue occupying the premises of the OML 30 operated by Heritage Energy Operational Services Limited (HEOSL), until their demands were met.

They were demanding, among others, the immediate release of the agreed development funds for 2016, 2018 and 2019 to the Community Development Board (CDB).

Others were: employment of graduates and other categories of labour hands from the 112 host communities to OML 30 facilities as well as reinstatement of all indigenous workers sacked without following due process.

The protesters were armed with placards of various inscriptions including: “Pay Our Yearly FTO Funds; Releases Our 2016 GMoU Now!!!; Host Communities Demand for Immediate Employment and We Demand for Urgent Staff Audit,” among others.

Speaking on behalf of the protesters, Mr Emuobosa Ohare, the Chairman, President-Generals’ Forum of OML 30 Communities, said that they have been agitating for their rights for the past five years without positive response from the company.

Ohare said that the Heritage Energy must pay all outstanding of scholarship funds from 2014 to 2016 to the beneficiaries in order to guarantee the continue operations of the company.

He said that the protest would continue until the oil company heed to their demands.

“To guarantee operations of OML 30, Heritage Energy must ensure that it pays all outstandings from 2014 to 2016 scholarship funds to beneficiaries.

“It must implement community participation in oil well drilling campaign in OML 30 and encourage community involvement in all operational activities in the fields.

“Until all these are addressed, we are not going to leave here. We want to speak with the management of Heritage Company here and not Lagos people.

“As you can see, all mothers are here, and we are prepared to sleep here until they attend to us,” he said.

A community woman, Mrs Edijala Ogherovhwo said, “Heritage Energy has taken over our land and can no longer go to farm and our water have been polluted “.

Commenting, Chairman of the OML 30 Community Development Board (CDB), Mr Morris Idiovwa, urged the Heritage Energy and her JV partners to do the needful for the people.

Idiovwa said the board and the leaderships of the communities would continue to engage the people in dialogue.

“It is unfortunate that we have to come back to this sort of experience where the companies will wait until the people get impatient with them and react in anger,” he said.

Okoh said that some of the issues raised by the protesters were already being addressed by the management.

“First, I will find it difficult to respond just like that because our corporate Head Office is in Lagos, he is the one that responds to this type of issues.

“About the scholarships, if you ask the beneficiaries, they have started receiving alerts since early last week; so currently they have been paid, and nobody is being owed.

“About the GMoU fund, it was delayed because of the impasse between the Community Development Board and the Isoko that rejected the election.

“Payment for 2016 was strictly for Nigerian Petroleum Development Company (NPDC), that of 2017 had been paid and the one for 2018 is being paid into the bank as we speak.

“Hopefully before the end of today, that money will be in the account. There is no deliberate effort to shortchange the people.

“In no time, the message will be carried to the protesters and the protest will be defused. It is in the interest of all of us,” he said.