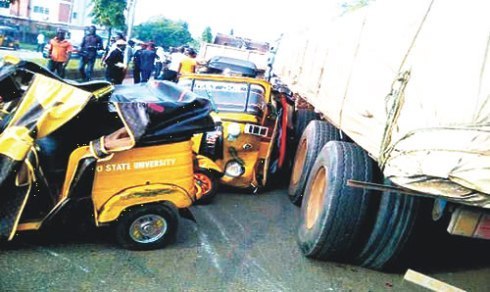 No fewer than five persons sustained varying degrees of injury in Ibadan on Monday as a truck loaded with sand crushed two commercial trycles at about 1: 00 pm.

The News Agency of Nigeria (NAN) reports that the incident happened at the New Garage area of the Oyo State capital.

The driver of one of the affected tricycles, Mr Abdulah Babatunde, said that his three passengers were about to disembark when he suddenly heard a loud sound and saw the truck speeding toward him.

Babatunde, who said that the truck coming from the toll-gate area, had  brake failure and crossed the median to the other lane.

The driver added that he and the other passengers quickly jumped out of the tricycle.

He, however, said that the passengers in his tricycle sustained injuries and were taken to the hospital.

Also speaking, the owner of the second tricycle, Mr Adeniyi Olarewaju, said there were no passengers in his tricycle at the time of the incident.

Olarewaju ,however, said that a passer-by was also injured in the incident while the driver of the truck ran away.

NAN also reports that an onion seller by the side of the road escaped death by whiskers as he was said to have gone to pray when the truck crashed into his stand.

Olugbenga Fadeyi, the Oyo State Police Public Relations Officer, confirmed the incident, saying the victims had been conveyed to the hospital.