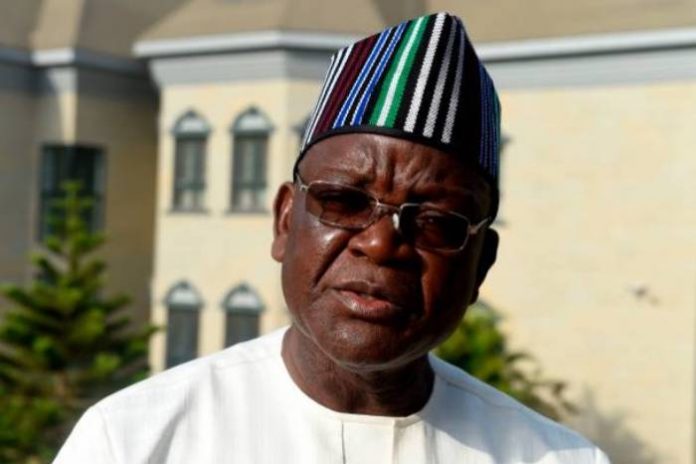 …APC Accuding Me Out Of Fear — Ortom
From Msughshima Andrew, Makurdi

The All Progressive Congress, (APC), in Benue state has accused the Benue state government of sponsoring attacks in some part of the state using the Livestock Guard.

The House of Representatives Candidate for Makurdi/Guma Federal Constituency, Mr Conrad Terhide Utaan made the allegation today while briefing newsmen in reaction to the attacks in Iye community of Guma Local Government Area of Benue State.

Mr Utaan said he had called the press to draw attention to a very dangerous trend emerging in Benue state recently where, according to him, Governor Samuel Ortom’s ineptitude to deliver on good governance, has made him desperate for survival.

He said that Governor Ortom has, recently, abandoned every single responsibility of governance and has gone into politics, making inflammatory statements that are inimical to the development of the state.

“Because of this lack of proper direction there seems to be a deliberate plan by d governor to divert the attention of the Benue public to other irrelevant issues”.

Utaan said rumours about Fulani herdsmen being attacked on the fringes of the Benue boundaries is just a deliberate provocation as the issues in the state are not necessarily between Fulani herdsmen and the farmers.

He argued that the Venue people have lived peacefully with Fulani before now acknowledging that unfortunately, the competition for arable land for farming and land for grazing has thrown up a lot of challenges between the two.

“As it is now, the Benue government has decided to turn this into a political tool seek reelection. I have it on good authority that in the last few weeks, state sponsored armed militia are being instigated to hit at cattle settlements in circumstances that can be best described as cattle rustling to the extent that it can create violence and anarchy as we prepare for this 2019 elections.

“The intention, we are sure is that the governor wants people to believe that Benue is still under threat of Fulani occupation.”

He noted that since the start of Operation Whirl Stroke in Benue, the crisis in the state has receded except some deliberate provocation by some armed militia in the guise of livestock guards.

He recalled that at INEC meeting to discuss voting points for IDPs in the state, it was agreed that all IDPs should return back to their homes for voting but “this did not go down well with the governor since he (Ortom) prefered elsewhere.”

“There was also an attempt for some people to vote at Torkula axis to allow for rigging of the election. Guma LGA chairman, Anthony Shawon suggested that Uvir ward should vote in Gbajimba but stakeholders opted for Iye. After losing the arrangement, the PDP deliberately decided to create anarchy in that area,” he said.

Utaan insisted that the APC in the state is convinced that those who carried out the attack on Iye, early hours of Thursday, were members of Livestock guards sponsored by the governor.

“It was a state sponsored violence on the people and not perpetrated by Fulani. We therefore urge the Federal Government to urgently disband and disarm the livestock or else, elections in Benue will be compromised”.

He further alleged that Governor Ortom and PDP plans to ensure violence in many areas of the state especially where they felt they don’t have a grip saing adequate security should be provided in Benue for a violent free elections.

He warned that the APC is the party to beat in the state as they are sure of winning all its elections.

Responding to allegations that he was sponsoring militia to kill his people, Governor Samuel Ortom stated that the APC is heaping baseless accusations on him out of fear of defeat at the forthcoming polls.

Ortom who responded through his Chief Press Secretary, Terver Akase said “the APC is clearly in a panic mood regarding the realities that is staring them in the face.

He said such statements were not befitting of a politician seeking to represent a people most of who have lost their lives to herdsmen attacks and that Mr. Utaan lacked the justification to accuse the governor whose administration has signed the open grazing law to protect people of the state.

He said Mr. Utaan’s attack on governor Ortom is also to please the federal government to play down his purported investigation by the Economic and Financial Crimes Commission EFCC.

Mr. Terver Akase was of the opinion that if anyone is to be accused of herdsmen killings, it should be the APC that has failed woefully to protect the people of Benue against herders attacks and not the governor.

He also sated that if anyone is to be blamed for the attacks on Benue people, It will be the APC and their leader in he state,Senator George Akume.

The Chief Press Secretary said Governor Ortom had not left anyone in doubt concerning his determination and commitment to safeguard the lives of the Benue people.

The governor described Mr. Utaan’s comments as unpatriotic, insensitive and capable of disrupting the general elections.

Also commenting on the call to disband the livestock guards, Mr. Akase, said the federal government does not have the right to dismantle the state livestock guards which was legitimately constituted, saying those calling for the proscription know nothing about the law and seperation of powers.

He therefore called on security agencies to provide everyone in the state with adequate security now, during and after the elections.

The Publicity Secretary of the People’s Democratic Party PDP, in the state, Mr. Bemgba Iortyom said the APC in the state has lost grip which is why it has resorted to propaganda.

He queried how the APC they came to the conclusion that they are more on ground than PDP saying, “Well, the elections are here already and we have less than 48 hours to test power.”

He also said alleged plan by the APC to disenfranchise Internally Displaced Persons, IDPs was a sad situation.