Home Sports Ezenwa In, Abdullahi Out: How Emenike Wants Super Eagles To Line Up...

Ezenwa In, Abdullahi Out: How Emenike Wants Super Eagles To Line Up Vs Iceland

Former Super Eagles striker Emmanuel Emenike has suggested that the team should deploy a 3-1-4-2 formation in their second game against Iceland at the ongoing 2018 FIFA World Cup in Russia on Friday in Volvograd, reports Completesportsnigeria.com.

Gernot Rohr deployed a 4-3-3 formation in their opening group game against Croatia last Saturday but watched his side lose 2-0 to the Vatreni at the Kaliningrad Stadium with the Nigerian team offering no spark in attack.

Ahead of the second group game on Friday in Volvograd, Olympiacos striker Emenike, who called it quits from international football in 2016, posted apicture of his preferred starting line-up for the Super Eagles on his Instagram page @emenike_9 on Tuesday.

Emenike wants to see Ikechukwu Ezenwa in goal. He also deployed Kenneth Omeruo at the left side of a back three which has the duo of William Troost Ekong in the central position and Tyronne Ebuehi at the right side. 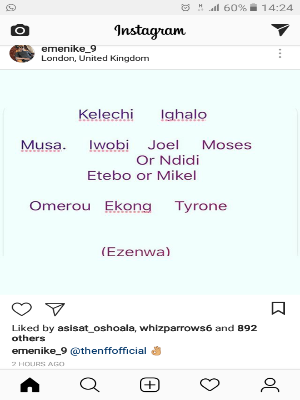 According to his line-up, the former Fenerbahce striker would love to see either Oghenekaro Etebo or captain Mikel Obi play in the deeplying midfield role.

Enenike, who starred for the Eagles at the 2014 World Cup, wants the trio of Ahmed Musa, Alex Iwobi and Victor Moses to be joined by Joel Obi or Wilfred Ndidi in a four-man midfield to support Kelechi Iheanacho and Odion Ighalo in attack.

The Super Eagles were impressively solid playing in a 3-5-2 formation in the second half of their defeats to England and Czech Republic but it remains to be seen if Gernot Rohr will tweak his formation for the crucial game against Iceland who are joint second with Argentina in Group D.

Nigeria are rock bottom in Group D and must beat Iceland to stand a chance of advancing to the round of 16.