President Donald Trump has again traded barbs with North Korea, shortly before offering to mediate in a heated regional dispute.

He took to Twitter to complain he would never call North Korean leader Kim Jong-un “short and fat”, after its foreign ministry called him “old”.

It was one of a series of remarks he made on social media before volunteering his services over maritime claims in the South China Sea.

China, Vietnam, the Philippines, Taiwan, Malaysia and Brunei all have competing claims to territory in the South China Sea.

Tensions with China have been high in both Vietnam and the Philippines, inflamed by the formers island-building and naval patrols.

A framework for a code of conduct was agreed in August, but this is still only an outline, with more negotiations due to take place before it can be legally binding.

Mr Trump, who has long styled himself as a dealmaker, suggested his expertise could aid the process.

“If I can help mediate or arbitrate, please let me know,” Mr Trump told his Vietnamese counterpart, Tran Dai Quang, at the Asia-Pacific Economic Cooperation summit in Hanoi.

Mr Trump’s own dispute with North Korea continues to escalate, at least in the insults traded across Twitter and in official statements.

On Saturday, North Korea denounced Mr Trump’s Asia trip, calling it a “warmonger’s visit” and again described the president as a “dotard” – a centuries-old insult for an elderly person.

Mr Trump responded with a passive aggressive tweet, suggesting he would never call Mr Kim was “short and fat”, and complaining: “Oh well, I try so hard to be his friend – and maybe someday that will happen!”

Why would Kim Jong-un insult me by calling me “old,” when I would NEVER call him “short and fat?” Oh well, I try so hard to be his friend – and maybe someday that will happen!

As the president took to social media, three US aircraft carriers were taking part in a military exercise in the Western Pacific, in a show of strength aimed at North Korea.

US Pacific Fleet commander Scott Swift said the triple-carrier drill was the first in the region since 2007.

South Korean and Japanese ships were also due to take part in the exercises, which began on Saturday and will continue until Tuesday. 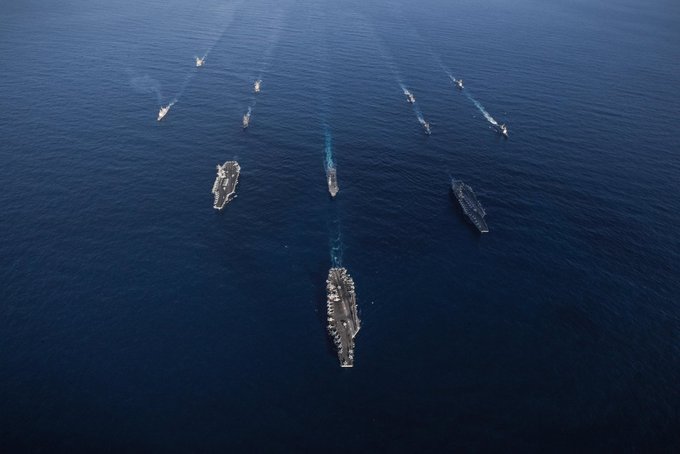 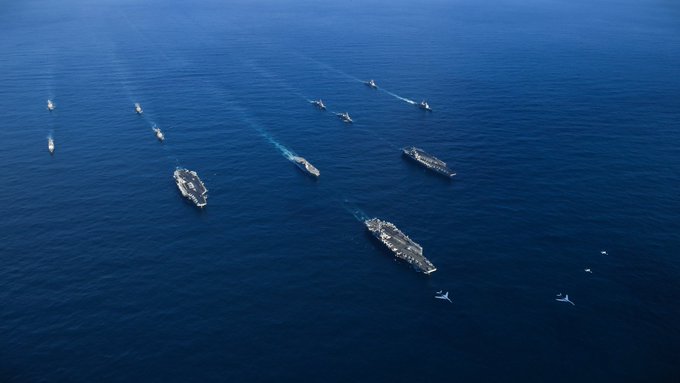 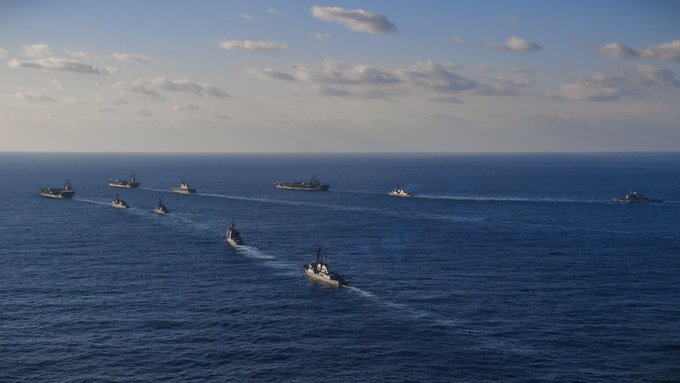 President Trump has not ruled out friendly relations with North Korea.

Asked at a news conference in Vietnam if he could see himself being friends with Mr Kim, the president said: “That might be a strange thing to happen but it’s a possibility.

“If it did happen it could be a good thing I can tell you for North Korea, but it could also be good for a lot of other places and be good for the rest the world.

“It could be something that could happen. I don’t know if it will but it would be very, very nice.”

The Vietnamese leg of Mr Trump’s five-nation Asia tour was met with protests. Mai Khoi, a singer and dissident, said police confined her to her home and threatened her with eviction, after she defied a ban on protests.

Ms Khoi, who was barred from standing for parliament last year, said she was escorted home after she flashed a sign insulting the president as his motorcade passed by.

She said she was protesting against Donald Trump’s attitude to women and his failure to meet with human rights activists in Vietnam.

Mr Trump will travel to Manila later on Sunday for the final stop on his Asia tour, before flying back to the US.