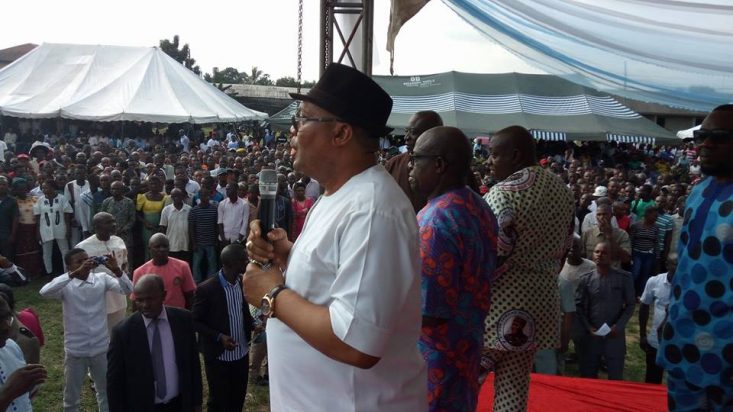 The formal flag-off of the construction of the Bonny/Bomu Road/Bridges in Rivers State on 12th October, 2017 by the APC led Federal Government has been described not only as monumental, historical, unprecedented but exhibition by President Muhammadu Buhari that he is a true son of Niger Delta region. By this event, he has demonstrated that he is not like Dr Goodluck Jonathan and Gov. Nyesom Wike who claim to be sons of the region but did/doing everything humanly possible to frustrate the development of the region.

This project once fully executed will open the gateway for economic growth and diversification of the economy of Bonny and its environs and drastic reduction in boat mishaps which have taken the lives of countless people, old and young, and has barred many from coming down to engage in meaningful businesses for the benefit of those in the region and Nigeria at large for the fear of losing their lives and properties to pirates or boat mishaps. Through this project Industries have also gotten a gateway and coupled with the uninterrupted power supply enjoyed by residents and indigenes of the community, the improvement in the economy of Rivers State will know no bounds.

These assertions were contained in a statement signed by the State Chairman, Chief (Dr.) Davies Ibiamu Ikanya and circulated to the Media on Friday in Port Harcourt the Rivers State capital.

Our thanks also go to the Nigeria Liquefied Natural Gas Company Limited (NLNG) for buying into this project and ensuring its actualisation. We commend and congratulate the Federal Minister of Power, Works and Housing, Barrister Babatunde Fashola who have proved by his enthusiasm in this project that he is a true friend of Niger Delta region.

Today, we can celebrate a rare gem and a true leader whose love for the region is infectious and must be commended. We are convinced of the multiplier effect of this N120 billion road project will impact in the Niger Delta region in terms of jobs that will be created with the establishment of more businesses that will employ youths in Bonny and Gokana Local Government Areas of the State.

It will be recalled that this project has been on the drawing board for over forty (40) years even before the Obasanjo’s administration (1999-2007) and have suffered several abandonments in the hands of the past administrations sadly including the six wasted years of Dr. Goodluck Jonathans as President of Nigeria.

To continue to ensure that this project does not see the light of the day, Governor Nyesom Wike has few days ago issued a sinister statement titled, “Rivers State Government warns Headmasters/Principals of Primary/Secondary Schools in Bonny LGA, Rivers State not to allow the APC-led Federal Government And NLNG Use Your School Fields For The Flag Off Of Bonny-Bobo Road” through his new Commissioner for Education, Tamunosisi Gogo Jaja, an Ibani son, where he threatened fire and brimstone that any principal or headmaster that allowed his or her school to be used for the ceremony will be summarily dismissed. Initially, the flag-off of this project which is the most exciting news to any well-meaning Rivers State person in many years was slated to hold at Government Girls Secondary School, Finima, Bonny. This led to the decision of construction giants, Julius Berger Nigeria, to look for alternative venue at Shell Gate for the event.

All these evil attempts and acts by Wike is just a carryover of the several attempts under the Jonathan’s administration to ensure that this project did not see the light of the day and despite all his efforts to frustrate the event, the flag-off of the Bonny-Bodo road project turned out to be a monumental success and to demonstrate his frustration, he has threatened to dethrone the A‎manyanabo of Ancient Grand Bonny Kingdom, King Edward Asimini William Dappa Pepple III, Perekule XI and all the Royal fathers and sack all the political appointees of his administration that attended the historical event, though we know Wike as a joker and disaster in governance, he should know his limits and how far he can be a clog in the wheel of progress of Rivers State. The party warned him not to touch any Rivers State son or daughter that attended or assisted to make this project a reality talkless of dethroning any Royal Father.

Governor Nyesom Wike’s absence during this epochal event simply tells the world of his hatred for any form of genuine development for Rivers State and the Niger Delta region and affirms the stand of Dr Dakuku Peterside the DG of NIMASA that he is the worst Governor among all the Governors in Nigeria.

We sincerely implore the youths from the areas that this project will cover to support and encourage the contractors that will be handling this project and checkmate any nefarious manoeuvre by Wike and his cohorts who have shown their disdain and plotted that this project will never see the light of the day to justify his wickedness and hatred for the development of the Niger Delta region.

We can now understand why Rt. Hon. Chibuike Rotimi Amaechi, the erstwhile Governor of Rivers State and the incumbent Minister of Transportation counselled Rivers State and her people that through APC we will actualise our dream to rediscover the dreams of the founding fathers of this State. We now understand and we rejoice with him for attracting development to Rivers from the Federal Government and showing leadership in the South-South.

We congratulate Dr. Dakuku Peterside and all those that accompanied Vice President, Prof Yemi Osinbajo who represented Mr. President during the event.

Rivers State and Niger Delta people should by now know who are their true friends and sons the party enthused.