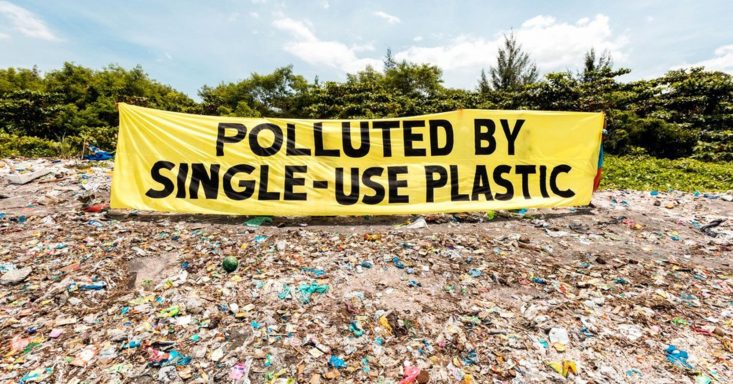 According to Ocean Atlas 2017 – a publication of facts and figures on the threats to our marine ecosystems by Heinrich Böll Foundation and the University of Kiel’s Future Ocean Cluster of Excellence – Nigeria ranks among the top twenty countries with the worst plastic waste management. At high and low estimates, Nigeria is world’s Number eleven among countries with the largest share of plastic waste that ends up in the ocean. Nationwide, over 200,000 metric tonnes of plastic waste is discharged into the Atlantic Ocean each year. The enormity and sombre consequence of this figure would be better understood when viewed against the backdrop of Lagos as a commercial city with UN mega city status and as a littoral state.

Presently, according to National Geographic, the population of Lagos is estimated at 24 million. The state government estimates that this population figure will climb at about 500,000 a year. Accounting for about 60 percent of economic growth in Nigeria, Lagos is home to 80 percent of the nation’s industry and accordingly generates about 600,000 metric tonnes of plastic waste per year of which over 100,000 metric tonnes finds its way into the ocean. Evidence of high plastic usage and mismanaged plastic waste is seen in landfills, the streets, along the beaches, and down the nation’s lengthy coastline.

Aside from littered beaches, and floating trash, 99 percent of ocean plastic breaks down into microplastic and disperses through the ocean before finally sinking into the depths. So only 1 percent of ocean plastic is actually found floating on the surface. In fact, the plastic concentration on the ocean floor is 1000 times greater than on the surface. The microplastic is trapped and embedded in the sediments on the ocean floor, forming a new geological layer, and causing a large problem with far reaching effects. Sadly, fish mistake it for plankton and eat it, granting microplastic and its associated toxins, environmental poisons, and disease-causing germs easy access into the food chain.

Recently in Manila Bay – one of the worst areas for plastic pollution in the Philippines – Greenpeace Philippines conducted a week-long beach cleanup and audit of plastic waste and   revealed that Nestlé, Unilever, Procter and Gamble, Colgate Palmolive, and Indonesian company PT Torabika Mayora are the top five contributors of plastic waste discovered in the area, contributing to the 1.88 million metric tonnes of mismanaged plastic wastes in the Philippines per year. Interestingly, four if not all of these culprits are well established and operating here in Nigeria.

Besides, Lagos State hosts over 2000 bottled and sachet water manufacturing and distribution companies. Lagosians depend 100 percent on bottled and sachet water for their daily supply of clean drinking water. On the average therefore, adults consume a minimum of 5 sachets or 3 bottles (75cl each) of water per day. Considering the teeming Lagos population, a total of 120 million sachets or 72 million bottles of water is consumed per day. This ‘Pure Water’ business, as it is popularly known, now generates tonnes of waste that clog drains, litter the streets and waterways, and ultimately alter the ecosystem.

As in other parts of the world, most consumer goods are now being packaged with plastic and nylon materials which as a result of poor waste management and recycling system have become agents of pollution for the marine ecosystems. It is noteworthy that of the over 13,000 metric tonnes of waste generated in Lagos per day, 12 percent consists of plastic materials in the form of soft drink and water bottles, water sachets, styrofoam, plastic footwears, along with other single-use plastics such as bags, biscuit wrappers, plastic bottle labels, straws and other consumer goods packagings.

As in the Philippines and other developing countries, Nigeria runs a sachet economy, which encourages the practice of buying Fast Moving Consumer Goods (FMCG) in small quantities. This drives market and profit share for most companies by making it more accessible to people with limited income. However, low-value single-use sachets are not collected by waste pickers and usually end up in landfills or scattered indiscriminately as litter in the streets or marine debris. According to TheWorldCounts (2014), only 1 out of 5 plastic bottles is recycled. The rest becomes litter as an estimated 1,500 plastic bottles end up as waste in landfills or thrown into the ocean every second.

While experts are emphasising the three R’s of waste management – reduce, reuse, and recycle – it is also recommended for manufacturers of plastic goods to practice Extended Producer Responsibility (EPR) where companies substitute non-reusable and non-recyclable products with new systems, such as refillables. Ultimately this would mean prevention instead of end-of-pipe waste management. In the short run however, EPR for Nigeria should imply an endorsement for manufacturers of plastic to participate in waste collection and recycling. Evidences abound that in the long term EPR would yield strong environmental and economic benefits.

Alongside EPR, upcycling is a sustainable choice that offers environmental solutions rather than more challenges. So while recycling converts plastic to plastic, upcycling creates entirely new products. As demonstrated by Waste Free Oceans (WFO) Belgium, plastic litter trawled from the sea can be combined with plastic made from sugarcane and other recycled plastic to create something new. WFO collects ocean plastic floating on ocean surface and transforms the collected waste into new products hailed as world-first for packaging. The foundation collaborates with fishermen to collect waste by means of Trash Catcher towed by trawlers or statically placed in the current in predefined hotspots of ocean debris where it can rest unmanned until the net needs to be emptied. Collected trash is sent to a local recycler for sorting, cleaning, and turning into polymer pellets. A converter combines the pellets with other polymers and then creates a new product.

The Philippines ranks among the top ten worst polluters into the world’s oceans, and Nigeria is in the first eleven. The time for a beach plastic audit is now. If not for anything, it would enable government and organized civil society to hold the Corporations to account through proper legislation and to remind them to use their resources to innovate and redesign their packaging and delivery solutions.