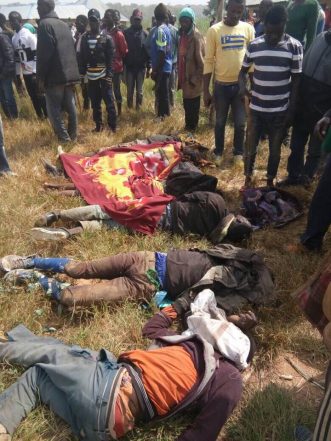 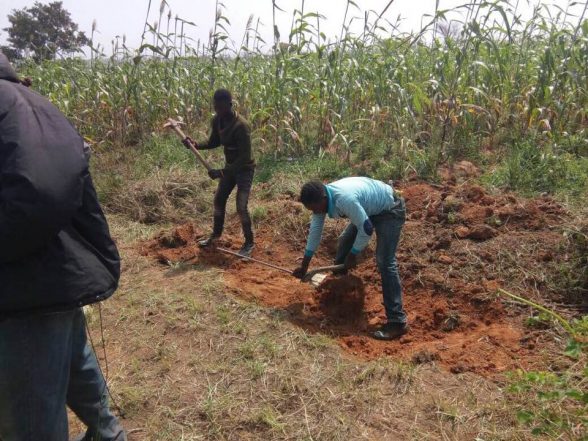 Ladies and gentlemen of the media,

A fortnight ago, a Rapid Response Fact-Finding Mission (RRFFM) from the Diaspora visited Nigeria and in addition to the South East IPOB inquiry also visited North Central Nigeria to investigate the latest massacre by Killer Herdsmen.
In part two of its interim report and observations, the RRFFM finds as a fact:

1. Fulani Herdsmen attacked and killed a confirmed number of 21 people in the Miango area of Plateau state in September

2. About 11 of the victims were children including in some cases siblings from one family and a mother and child
3. The massacres occurred a few days after an altercation between a Fulani herdsmen and a farmer over encroachment on his land
4.  The community was alerted in advance that the herdsmen were planning reprisal attacks over a Fulani herdsman found dead
5. Even after the deployment of security forces in the area, herdsmen again attacked the community and in the process a Naval man attached to the STF (combined security force) was killed and another wounded, presumed dead
6. there are many nursing wounds within the community
7. The roads are bad, rough or non-existent especially after rain fall rendering the communities inaccessible and giving the nomadic attacks an advantage during their attacks
8. Phone networks do not reach the community making it impossible for villagers, victims or even the security forces to easily communicate for back up
9. While the presence of security checkpoints were noted on the Abuja-Jos highway, there were far fewer in the Miango region where villagers were in anxiety over further impending attacks. The highway checkpoints appear to be ineffective as the herdsmen move over the fields, farmlands and mountainous terrain to unleash their attacks and not the highways.
UPDATE
10: RRFFM has continued to receive reports of attacks including the murder last week of a soldier as well as a former head of service of Plateau state and one other
11. RRFFM just received credible reports of further attacks including burning, killings and maiming inspite of existing curfew over the weekend and up to yesterday Sunday October 15, 2017.

RECOMMENDATIONS & OBSERVATIONS:1.  We are gratified to note the winding down of the Nigerian Army’s Operation Python Dance 2 in the southeast effective yesterday as recommended in our interim report Part 1. We urge the Nigerian government to redeploy troops to central Nigeria where the onslaught of killer herdsmen has continued to claim lives perennially including lives of security agents just in the past few weeks.

2. The deployment of troops to engage killer herdsmen is not contradictory nor inconsistent with our position that the military should not be the primary institution for internal security management in a democracy. While the military operation in the southeast was an attack on civilian non-combatants, a military engagement against the killer herdsmen would be to protect Nigerian citizens from individuals whom the government has categorically stated are foreign nomads from Chad, Niger and other West African countries.
3. We condole the government and people of Nigeria on the loss of lives of members of the Navy, Army and police in recent herdsmen attacks in Plateau since last month and appreciate these national heroes for their service. Our hearts go out to their family members and we urge the government to speedily pay their death benefits, life insurance and other entitlements.
4. We urge the Nigerian government to seriously consider recognizing the terroristic activities of these foreign killer herdsmen as such and responding accordingly given the intractable nature of these attacks. Available data from our fact-finding mission on the Agatu massacre in 2016 showed that in Benue state alone, there were over 40 herdsmen attacks in a 3-year period averaging one a month.
5. We urge the Nigerian government to declare a conflict-free zone as a food security survival imperative in the agricultural middlebelt of Nigeria where farmers rendered IDPs in Benue and Plateau particularly have been unable to return to or recover their farmlands from the marauders and their cattle. It is an unconscionable travesty that farmers are now beggars waiting for handouts in camps.
6. We urge the government to diligently prosecute to the fullest extent of the law the killer herdsmen responsible for these crimes against humanity and kidnapping and robbery which have become rampant along Jos road and Kaduna road respectively.
7.We urge the government to restrict the ingress of foreign killer herdsmen (FKH) into the country. While the government’s point is noted that relevant ECOWAS subregional protocols allow for visa-free transnational entry and exit, no responsible government should allow known killers to breach its borders at will to kill its citizens and threaten food security. Indeed if in a previous iteration as military dictator, General Buhari was able to suspend sub regional visa waiver protocols to send illegal aliens back for economic reasons, it should only be logical that FKH should be shut out as a potent threat to national security.
8. We urge the government to provide medical attention to victims of these attacks, to fix the roads and ensure electricity and telephonic connectivity to these isolated agrarian communities. It appears ill-conceived for the army to be providing vaccinations in an atmosphere of distrust in the southeast at the same that the government is steering multilateral partners to service the north which they maintain is needier.
9. We urge the government to provide adequate troop coverage, equipment and air patrols over the Benue/Plateau region to scout for the FKH attackers. Again it is unclear how the deployment of the Airforce for operations in the southeast is sensible given the zero casualties occasioned by IPOB compared to the numerous fatalities perpetrated by FKH. The Tactical Air Command in Makurdi and the Airforce Base in Jos should be empowered to undertake surveillance sorties to secure their citizens from the nomadic threat.
10. We urge the government to consider the de-proscription of the Indigenous People of Biafra (IPOB) to allow for a return to the rule of law and the justice system for the redress of any alleged criminal conduct while opening dialogue for political resolutions of issues of marginalization.
a. Firstly, the characterization of IPOB as a terrorist organization without any known terrorist act, while acclaimed FKH ranked 4th on the global terror index are considered mere criminals is in fact a revalidation of the perceived injustice and double standards which the separatists are railing against.
b. Secondly the designation as a terror organization has made it difficult for human rights workers and medics to provide assistance to victims of the military operation for fear of being adjudged “aiding and abetting” terrorists.
Victims we met were afraid to even approach the state government for take up the offer of assistance with medical expenses for fear of being arrested. They therefore are suffering in silence.
c. Refusal to allow an open discussion of their legitimitate grievances can only serve to push them underground and engender a militant movement because those who make peaceful change impossible, make violent change probable.
d. Making IPOB a terrorist organization is ultimately deleterious to foreign investors and much needed FDI for economic recovery.
Nigeria is currently home to two banned Islamist terror groups:
– Boko Haram
– Ansaru and
– IPOB (a non-violent separatist group not considered terrorists abroad) and
– Foreign Killer Herdsmen (violent group considered terrorists abroad but not by Nigeroa)
This would amount to a total of at least 4 terror groups bringing Nigeria into the terror league of Aghanistan and Pakistan.
e. It took the government of Nigeria 9 years from Boko haram’s first terror attack to proscribe it as a terror group in 2012 while it took three days to proscribe IPOB even after the court trying IPOB leader Kanu held that it wasn’t a terror group.
– It would amount to undue interference in the legal process even as Kanu’s trial is set to resume on October 17 in Abuja. Given the military intervention and the terror designation, the government has practically upturned the trial under due process and cannot in good faith blame Kanu’s sureties for failure to show up for trial.

11. The International Criminal Court should look into the FKH atrocities as part of its ongoing preliminary examination into crimes against humanity.

12. The international community and the Nigerian government are enjoined to bring an end to these reprehensible massacres.

N.B The team which included an award winning film producer, an award winning international human rights lawyer and an award winning model were drawn from the US and U.K. They have requested anonymity in the interim until the assignment is completed. However the Principal Investigator may be cited (below).

Thank you for your kind attention.