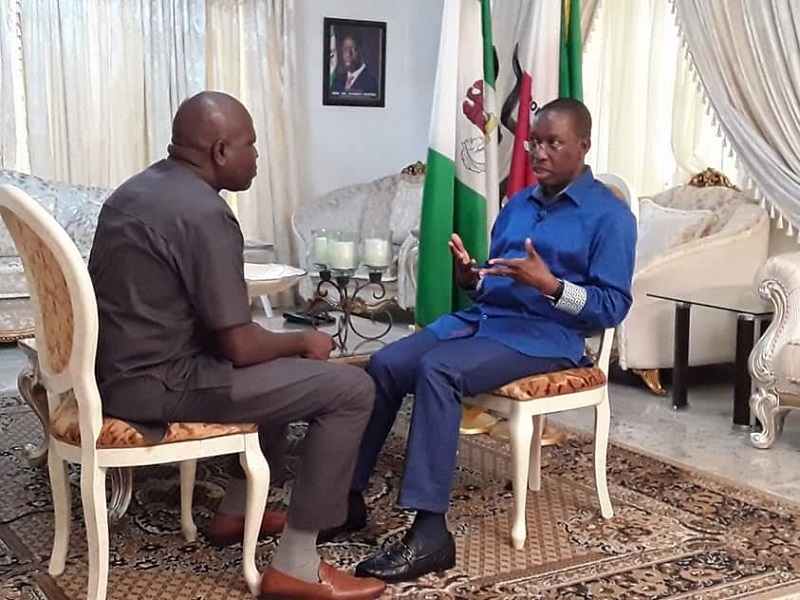 The governor who purportedly was a guest on the station’s programme Friday 11 August, at 1:00 pm, spoke on the state of the People Democratic Party (PDP), Delta and other national issues.

247ureports.com gathered that the crew were in Government House for the live coverage.

Meanwhile, concern Deltans have lamented the sorry situation of the Delta State Broadcasting Service (DBS), television station which is currently off air after a heavy downpour which submerged the station on June 22nd, 2017.

The station was submerged following the flood which allegedly destroyed some of the equipment, forcing the station to go off air in the last two weeks.

An Asaba base activist, comrade Jude Onochi, who spoke to our correspondent our the governor’s interview at the TV Station, lamented bitterly the manner which Okowa was pouring resources to privately owned media houses, thus, leaving the state own TV and Radio Stations in a sorry situations.

“I tell you that I have lost confident in our own Okowa who we thought that will do the right thing. But he (Okowa) has proved me wrong that he is like other politicians who came-in to deceive us”.

“I was watching the governor today on air in another station, watching our money going to another private pocket who is not a Deltan. It is a pity that out own station is off air for some weeks now. I have never seen someone whose house is on fire and he is busy doing something in another man’s house. It is a taboo!

“The money we heard that was given to that station who came from Lagos or Abuja is enough to bring our DBS on air. N27 million was the amount of money given to the station. It does not include the money given to the crew, because I know that live programme of such gulps million naira. The most painful thing it is not even a programme that will better the lives of Deltans rather party issues”, he bemoaned.

“Is it a bad thing to watch our governor live on our state television or a phone call programme? He asked