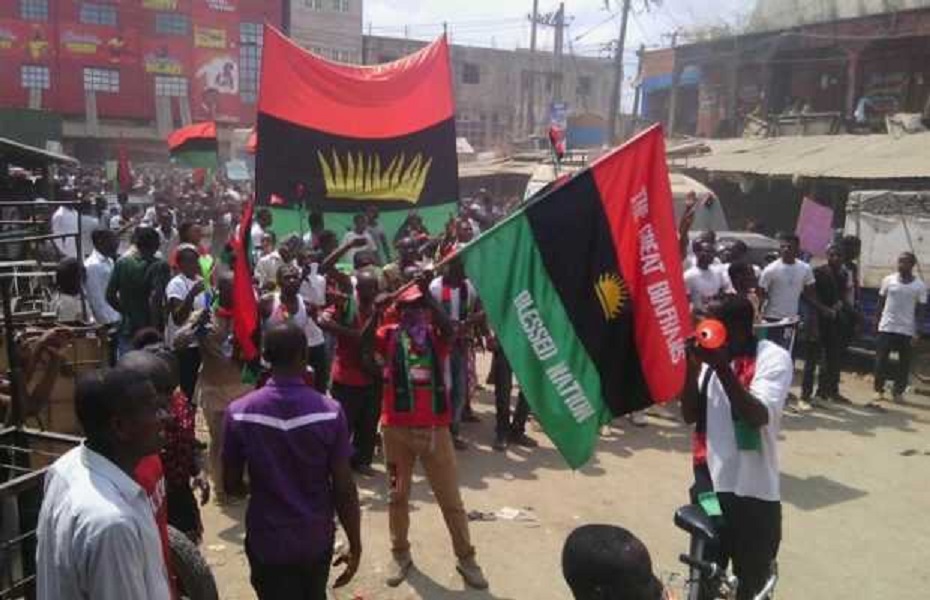 We the indigenous people of Biafra (IPOB) worldwide under the command and leadership of Mazi Nnamdi Kanu wish to use this opportunity to reiterate, yet again, that IPOB have never shifted ground on its resolve to boycott forthcoming governorship elections in Anambra State. Biafrans cannot be reasonably expected to agree to any electoral process that will only perpetuate their current slave status and misery in this colonial contraption named Nigeria. While we may accept being routinely killed and dispossessed outside our land, such intimidation cannot be allowed to go unchecked in  Biafraland. We are therefore calling on all those who claim to be Igbo leaders especially those in the pay of Nigerian government  to please retrace their steps before it is too late.

It is unfortunate that these persons and certain others have predictably fallen for the usual crumbs falling off the master’s table in Aso Rock in exchange for their shameful public rejection of the IPOB led Biafra restoration project. What these men hope to gain by continually selling the collective interest of the masses for peanuts only heaven knows.

We unwaveringly maintain that come November 18, 2017 the whole world will come to the understanding that Biafrans are determined to be liberated. A few selfish individuals motivated by greed, envy and jealousy, whose whole life has been characterised by merchandising in misery and suffering cannot trade with our future anymore. These men went to Abuja with a list that had their family members, friends, relatives and girl friends for consideration in federal government appointments in exchange for our freedom. Their families occupying ministerial and Federal positions is more important to them than liberating their people from oppression and servitude.

This present generation of Biafrans can promise them that days are gone by when leaders emerge in Biafraland through a process of selection determined by Hausa Fulani oligarchy in Sokoto and Kaduna. The era of Sokoto Caliphate and Aso Rock dictating political outcomes in Biafraland is over and will be confirmed on the 18th of Nov. 2017. All the money these men collected from Abuja to denounce Biafra project will forever be an albatross around their necks. History will never forgive them.

We IPOB maintain that there will be no more elections in Biafraland starting with Anambra State this year. We are equally aware that some of these Igbo leaders, politicians and clergy are actively working with their Arewa counterparts in trying to convince the presidency to re-arrest our leader Mazi Nnamdi Kanu. This deplorable, unprincipled and disgraceful attitude is indicative of the decay at the heart of the politics of compromise these men have been playing since after the war in 1970. They will sell their soul to the devil of it means one more contract, one more Federal appointment or elongation of tenure. They must know that this generation of Biafrans, both old and young, say no to their usual sell-out antics. It is either these men are with us in our quest for Biafra restoration or they are with their Hausa Fulani masters in their unholy desire to remain as slaves in Nigeria.

It is imperative to understand that we IPOB are not asking the leadership of Ohaneze Ndigbo to abandon their quest to remain in their restructured Nigeria, what we in IPOB under the leadership of Mazi Nnamdi Kanu is saying is that they should be restructuring Nigeria while we continue with the struggle for Biafra independence. If they are able to finish their restructuring before the arrival of Biafra independence, then we will examine the parameters on which the restructuring was established, then the people of Biafra will decide for themselves between the restructured Nigeria and Biafra independence which one is more better. Ohaneze should not worry for now because ultimately the people will decide for themselves. One man, one vote!

More so, we are using this opportunity to advise all genuine Biafrans, friends of Biafra and lovers of Freedom to ignore the sponsored anti Nnamdi Kanu/IPOB rantings from these Hausa Fulani slaves masquerading as politicians and Igbo leaders because they are responsible for the mess Biafraland is in today. They all know a successful election boycott in Anambra State will spell doom for Nigeria and will hasten the coming of Biafra independence that is why they have rushed to collect money from their Arewa masters to publicly denounce Biafra agitation for freedom.

No matter the route IPOB might take in this ordained and noble quest to free Biafrans from this perennial servitude, the masses must have their say. The era of imposition of ideology has come and gone. Only the people of Biafra can, through a referendum, determine their destiny, not IPOB leadership, not any other collection of leaders for that matter.

With the happenings now, IPOB should brace itself, because between now and November 18, 2017, we would witness the most vile,  ruthless and vicious media campaign of calumny against IPOB. We must prepare ourselves to withstand the avalanche of sponsored lies and negative media coverage from the Federal Government of Nigeria and our enemies within. Their aim as always is to divide Biafraland in the hope of weakening our resolve but we must stand firm because this is the last major battle before we taste our long overdue freedom.

We have in the past few days discovered so much blood money from Hausa Fulani leaders swirling around Biafraland looking for those to contaminate in their mission to stop IPOB.

Therefore, our people must remain focused and resolute if truly they want Biafra to be restored in our time. We say capital NO to Anambra elections and further elections in Biafraland until a date for referendum is agreed. We are not calling for war rather a peaceful Biafrexit from the Luggardian contraption. This way our people will choose where they wish to belong. Anybody equating the demand for referendum as a call to war should have his brain examined.

IPOB has returned power back to the people and they will exercise it when called upon to do so. We challenge the Federal Government of Nigeria and her supporters to test the acceptability of One Nigeria through plebiscite or referendum not with threat, propaganda and lies.