The embattled former governor of Abia State, Orji Uzor Kalu finds himself in another misfire. This is as one of his surrogates falsely levied an allegation on the person of Engineer Chinedum Orji alleging that he had called for the President of the federal republic of Nigeria to be impeached. The allegation was posted on his Facebook page.

Orji Uzor Kalu who recently dumped the PDP for the APC over fears for his financial crimes case with the EFCC had been engaged in a battle to tarnish the name of the former Governor of Abia State, Senator T. A. Orji – and had been in the habit of sponsoring nefarious publications. The recent attempt appears to have been directed at the son of the former Governor, Engineer Orji.

Engineer Orji has since denied the allegation in a press release obtained by 247ureports.com

The attention of the member representing Umuahia Central State Constituency, Abia State House of Assembly, Engr. Chinedum Orji has been drawn to a false, fabricated and unverified online news publication.

It appeared first on the Facebook wall of one Mr. Damian Ifeanyi Igbokwe under the caption of ” Impeach President Buhari Now”. 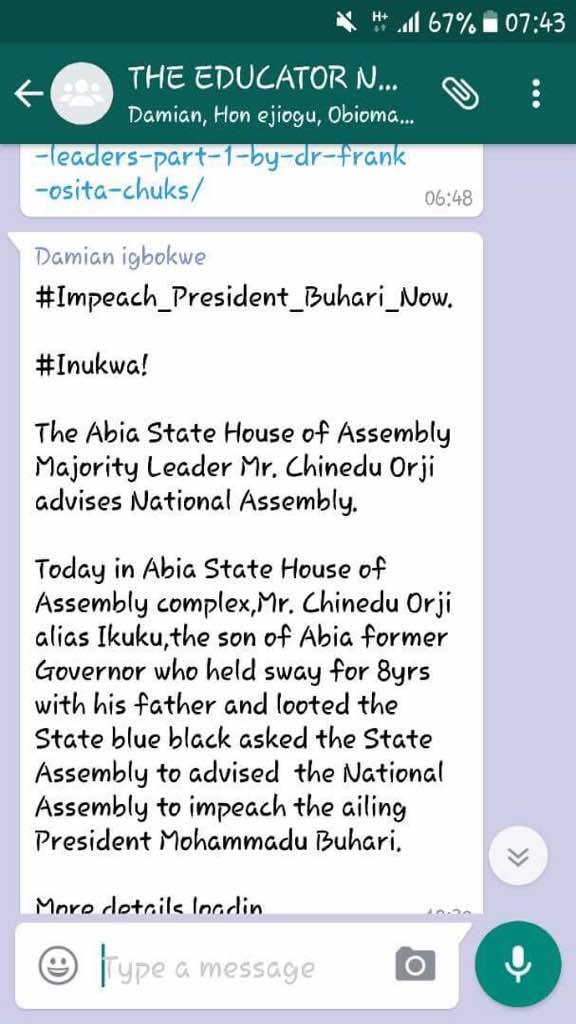 While I do not want to waste my time on explanations to such publication knowing that the said poster is an agent of Orji Uzor Kalu, the former Governor of Abia State and the publisher of the Sun Newspaper popularly known for fake news publication.

To ensure the authenticity of the alleged story,I challenge them to publish this story on Sun Newspaper, for proper court actions.

It is also not surprising to know that the said Mr. Damian Igbokwe is standing in for his Pay master, Orji Uzor Kalu who yesterday, 17th July, 2017 had a disgraceful outing at the Ohafia High Court following the 5B Naira libel law suit that I instituted against him and his Sun Newspaper for writing and publishing a story against my person where they alleged that I’m a terrorist.

Let me state categorically, that as a democrat, I am a strong supporter of President Buhari as the President of the Federal Republic of Nigeria.

I am also not failing in my earnest prayers that Mr.President gets well soonest.

At this time, let me use this medium to alert unsuspecting Nigerians, as 2019 approaches, Orji Uzor Kalu, as it is inherent in him will use his sun newspaper, online platforms and his hirelings to fabricate malicious stories against my person and others whom he considers threats to his political ambitions.