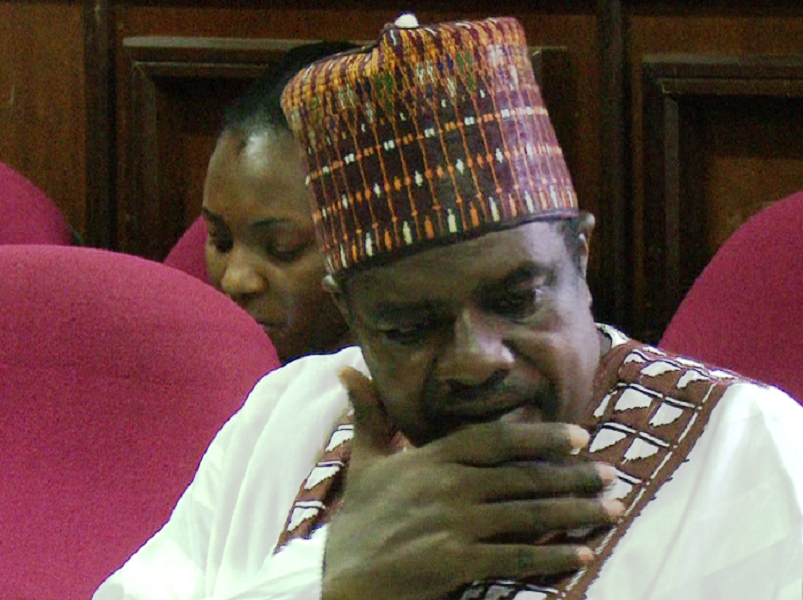 [poll id=”28″]
Ten years after his first arraignment, Saminu Turaki, a former governor of Jigawa State was on Tuesday, July 18, 2017 re-arraigned by the Economic and Financial Crimes Commission, EFCC, before Justice Nnamdi Dimgba of the Federal High Court sitting in Maitama, Abuja on a 32-count charge of fraud.
Turaki, a two-term governor is facing multiple charges bordering on criminal conspiracy, stealing, money laundering and misappropriation of public funds.
After his was arraigned in 2007, he went into hiding and was subsequently declared wanted by the EFCC, for failing to present himself for trial. A warrant directing the Inspector General of Police or his officers, as well as the EFCC, to arrest him, was also issued by the court.
But attempts to execute the warrant failed, as Turaki remained elusive until July 4, 2017 when operatives of the Commission finally apprehended him at a public function in Abuja.
The defendant who was in the dock to take his plea to a charge filed in July 2007, pleaded not guilty to all the counts.
Count 31 of the charge reads:
“That you, Ibrahim Saminu Turaki, on or about 15th July, 2006 at Abuja, within the jurisdiction of this Honorable Court did conspire with Natural Resources Ltd, Arkel Construction Nigeria Ltd, Wildcat Construction Ltd and Ahmed Ibrahim Mohammed (now at large) to launder the sum of N5,200,000,000.00 (Five Billion, Two  Hundred Million Naira ) and you thereby committed an offence contrary to section 17 (A) of the Money Laundering (Prohibition) Act 2004, and Punishable under Section 14 (1) of the same Act.”
Particulars of count 32 read:
“That you, Ibrahim Saminu Turaki, INC Natural Resources Ltd, Arkel Construction Nigeria Ltd, Wildcat Construction Ltd and Ahmed Ibrahim Mohammed (now at large) on or about 3rd May, 2006 at Abuja, with the jurisdiction of this Honorable Court did collaborate in concealing the genuine nature of the sum of $20,000,000.00 USD (Twenty Million United State Dollars) which sum was derived from an illegal act and you thereby committed an offence punishable under Section 14 (1) (b) of the Money Laundering (Prohibition) Act 2004.”
Upon his plea, counsel to the EFCC, M. S. Abubakar, relying on Section 300 of the Administration of Criminal Justice Act, 2015 asked for a date to commence trial.
However, Turaki’s counsel, Ahmed Raji, SAN, through an oral application prayed the court to admit the defendant to bail saying, “He is not an ordinary citizen”.
He added that the defence was not aware of his arraignment today; otherwise they would have come with a formal application.
Responding, Abubakar opposed the oral application stressing that, “the defendant did not come to court upon his free will, but was arrested pursuant to a bench warrant issued in September 2014 by Justice Yahuza of the Federal High Court, Dutse.”
He added that, “bail is to ensure attendance and from the antecedent of the defendant, it is clear that if he is released, he would not be available to stand trial and that would defeat the essence of bail”.
The vacation judge, after hearing arguments from both sides, gave the counsel some time to agree on bail terms to further accelerate the process.
At the resumed sitting, Justice Dimgba admitted the accused to bail in the sum of N500million with two sureties in the sum of N250million each. The sureties must either be a businessman, a professional or civil servant of the federation not below the rank of director. Each surety must own a landed property within the FCT excluding the satellite towns and must depose to affidavit of means.  The sureties must present their current tax clearance certificate issued by Federal Inland Revenue Service.
The judge also ordered Turaki to deposit his travel documents to the registry of the court and must not travel outside Nigeria without the permission of the court and by application on notice and the prosecution is served. The first defendant (Turaki) shall report to the EFCC on the first working day of every month until the court sees the need to dispense with the order.
Additionally the judge said, “The EFCC working with the court shall verify the satisfaction of the bail conditions. The court shall only approve of the release of the defendant and sign a warrant to that effect upon the receipt of the letter from EFCC confirming indeed the conditions have been met and that the EFCC is satisfied with the bail conditions. The court shall verify all conditions, which should be met within 24 hours”.
Meanwhile, the defendant is to be remanded in Kuje prison until he meets his bail terms.
The case has been adjourned to September 19, 2017 for trial at the Dutse Judicial Division.