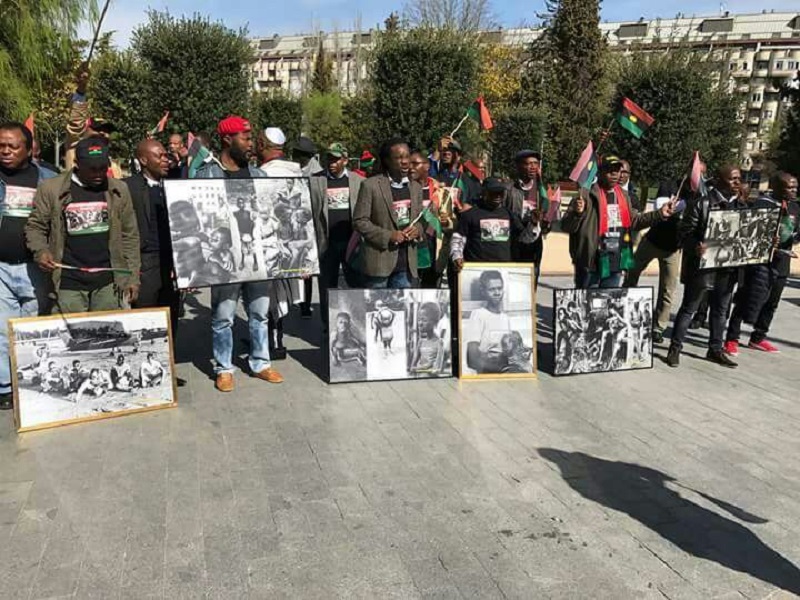 Media reports indicate ten unnamed secessionists are the plaintiffs in a suit brought before a United States (U.S.) District Court for the District of Columbia hiding under the Torture Victims Protection Act and Alien Tort Claims Act Complaint of that country. They sued Nigeria’s Chief of Army Staff, General Tukur Yusufu Buratai alongside 13 others over allegations of torture and extra-judicial killings stemming from when the military was brought in to contain Biafra separatists that were terrorizing other Nigerians in the southeast of the country.

The suit would have been comical in all ramifications and laughable but for its deeper import, for it confirms the core agitators for the balkanization of Nigeria as people with identity crisis who have not only lost touch with the reality of whom they were but have also resigned to being persons of lower castes in perpetuity. This gives credence to what one would have once dismissed as an extreme case of conspiracy theory, but now it is clear that while foot soldiers that bought the pipedream of a Biafra Republic are brainwashed enough to commit crimes in pursuit of their mirage the real hands pulling the strings of these puppets en masse have foreign taints written all over them.

General Buratai did not become the target of such suit when the army under his command broke up the Biafra lynch mob that was imposing an economic clampdown on the poor populace in 2016; he became the target of attack the moment it became obvious that he was going to stop the continued growth of Boko Haram, which as a terror group has the ultimate agenda of breaking up Nigeria – same as the Biafra separatist groups like the Indigenous People of Biafra (IPOB) and the feral wing of the Movement for the Actualization of a Sovereign State of Biafra (MASSOB) with their other franchises. The Chief of Army Staff and the Nigerian military became for these groups and Boko Haram the symbol of Nigeria’s resilience in the face of several attempts at destroying the country, which he vowed would not happen for as long as he is alive. The US suit against him and the institution is therefore a direct attack on Nigeria’s corporate existence since the endgame is not to extort payment for damages from the Nigerian government but to push General Buratai and his would be successors into a corner from where they would not be able to defend Nigeria’s integrity and sovereignty.

The suit is bound to run out of steam in the shortest time possible irrespective of it being assigned to United States District Judge Ellen S. Huvelle or being pursued by career sharks, Attorney Bruce Fein of Fein & DelValle PLLC, and W. Bruce DelValle. The counsels to the plaintiffs have the track record of helping to shake down the country’s government to pay their clients but in the case of Nigeria they have it coming. Assuming they go on, backed by the neocons and the military industrial complex that want Nigeria in crisis, to win the case they will eventually lose in the court of morality and decency.

One, the ten plaintiffs listed themselves as “Joe Doe”, faceless as it was reported that “plaintiffs alleged that identifying plaintiffs or decedents would expose them, their families and relatives to an intolerable risk of death or serious bodily injury at the hands of defendants or the Government of Nigeria.” These were the same scam artists that had no reservations about taking over federal roads, locking people out of markets and shopping malls and drowning security personnel inside the river! They were the same people that stand in public places to call other ethnic nationals “animals” living in zoos. It is remarkable that the Nigerian government did not kill them when they threatened and even killed others but would now kill them for making a fool of themselves with a sleazy lawsuit in the United States.

Secondly, it is glaring that the addiction to pecuniary gains is incurable for the “Joe Does” that instituted the legal action.

Their uppermost preoccupation is to make money off the case, which is not surprising given the fact that the insurgency is now starved of funds: many of the politicians and businessmen financing the Biafran insurgency are being exposed daily, security operatives are clamping down on kidnappers and armed robbers, while the anti-corruption war of President Muhammadu Buhari has dried up the slush funds that had once channeled dubious contracts to their sponsors. Judgment money from the US would have come in handy, especially since they would have easily converted same for arms shipment only that is a delusion of grandeur that would never happen.

Also, one wonders if the plaintiffs can be in the US and engage in the kind of criminal acts they were perpetrating here in Nigeria. In case they have limited capacity for recall, in addition to any other evil mentioned in this write-up their movements have engaged in sustained spewing of hate speeches, incitement and even murder including mass murder that saw mass graves being discovered in forests. Had they done these things there, definitely the US will not be soft on them the way Nigeria has been and they would have been talking to their fancy American lawyers from behind sandwiched glass partitions over intercoms in crowded for profit American jails.

Furthermore, the plaintiffs are among those suffocating the space in Nigeria with their constant tirades about how they want to create a new country. Shouldn’t they have simply convened a joke of a Biafran High Court, or even name it Supreme Court of Biafra Republic for the sole purpose of trying Buratai.

That definitely would have been a faster route to indicting the subject, finding him guilty, convicting him of the aforementioned crimes and sentencing him to death. But the secessionists are far too hypnotized by their addiction to being copycats that they had to go to the US to shop for a court before which to charge Buratai.

They had similarly lost touch with their roots that they went to procure Judaist religion from Israel when they could have simply invoked Amadioha to strike all those standing in the way of the actualization of their moribund republic. But no. They cannot convene their own court, even a jest of a court, neither would they remember to call on their indigenous deities, which wouldn’t pay heed to their supplication on account of their cause being questionable. The vocal minority parroting Biafra, distinct from another pseudo-patriotic majority that believes in a restructured Nigeria, are too far gone in the loss of their identity.

Their problem is not that they no longer believe in Nigeria; they similarly do not believe in the Biafra they are seeking. The problem of these robotic agitators is that they never believed in themselves in the first place; which is the crux of their idiocy. It was what brought them out on the streets committing crimes that the Nigerian military had to put a stop to. If they believed in themselves they do not need the name calling business, they would not have to force poor people to go without their daily earnings in the name of forced sit-at home orders, they would not be wearing kippah – the Judaist skull cap that looks ridiculous on the African anyway, and they definitely would not be gambling their limited cash on American lawyers that will spend the money for buying yachts and personal jets.

Much as it would be fun to watch the plaintiffs burn their money and waste their time on the US suit since it would amount to nothing, the implied insult to Nigeria by way of allowing the suit to proceed is what the Federal Government must deal with, and with dispatch too. Any country is free to support the defunct Biafra same way they did 50 years ago but making their law courts available to challenge Nigeria’s right to enforce law and order as well as address security breaches is one we must never tolerate. The government must therefore actively explore diplomatic options to put an end to this farce. Negating Nigeria’s sovereignty in a roundabout way is unacceptable and this much should be made clear.

General Buratai must know that he has the support of Nigerians to command an Army that keeps them safe. He should treat the lawsuit in a way that guarantees his resolve to keep fighting for the corporate existence of Nigeria is not dampen for the briefest moment since that is apparently the true intention of the frivolous filing. He should be bold enough to tell his accusers that there are limits to idiocy and the US lawsuit is testing those limits.

The Nigerian Military is reassured by some volunteer lawyers that have agreed to defend the Nigerian state in its war against terrorism. The military should furnish this legal team with facts that would reveal to the American people that the Biafran insurgents posing as plaintiffs are the ones they need to fear. The trial should provide insight into the source of IPOB and MASSOB’s funding and should consequently open the door for the US to impose travel ban on their members alongside ISIS and al-Qaeda fighters. They are terrorists who, when fished out, should be placed on international terror list and sanctioned as deterrence to others who hide under such nefarious platforms to torment the peace of other sovereign nations.