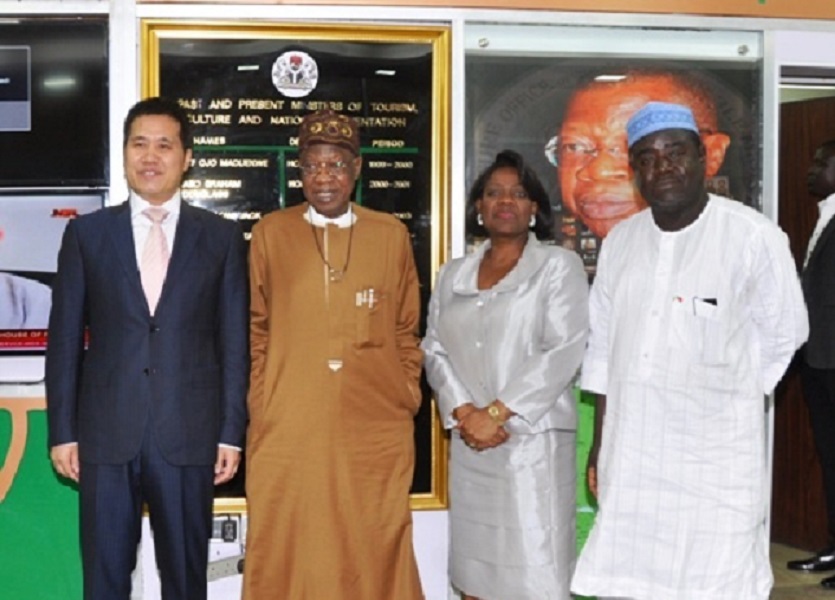 The Minister of Information and Culture, Alhaji Lai Mohammed, has described the partnership between Nigeria and China in the area of infrastructural development as a catalyst for domestic tourism in the African nation.

The Minister made the remarks in Abuja on Thursday when he received the Chinese Ambassador to Nigeria, Mr. Zhou Pinson,  on a courtesy visit.

Alhaji Mohammed expressed delight at the bilateral relations between Nigeria and China, which he described as mutual and sincere, saying China remains one of the strategic partners of Nigeria because of its genuine commitment and passion towards the country.

He said the cultural ties between the two countries can further be strengthened especially in the areas of film and cinematography, and he reiterated his earlier request for the screening of Nigerian movies in China.

He said the screening of Nollywood movies in China will reciprocate Nigeria’s gesture towards Chinese movies, which are shown in Nigeria, in addition to being a deliberate strategy to ensure better understanding between the two countries while also creating a market for Nigerian films in China.

Alhaji Mohammed underscored the critical role which discipline played in the Chinese cultural revolution and said Nigeria will key into it to further enrich its National Re-orientation Programme “Change Begins With Me.”

“One of the major strength of China today is discipline, it’s ethics and respect for values and this is exactly what we are trying to achieve through our ‘Change Begins With Me’ Campaign,” he said.

The Minister said even in the area of media and entertainment, China is closely linked with Nigeria through the partnership between the Nigerian Television Authority and Star Times, and acknowledged that China also offered a loan of $500 million to revamp and upgrade the broadcasting industry in Nigeria.

In his remarks, the Chinese Ambassador to Nigeria said culture and people-to-people relations are part of the ten priority areas which China is exploring to foster relations with Nigeria.

He said China has opened discussion with the Minister towards the building of Nigerian China Cultural Centre in Nigeria to further promote the cultural ties, which will boost communication and understanding between the two countries.

“What we wish to do with Nigeria we have outlined in the four cardinal framework and we have the bilateral document with this esteemed ministry. So, cultural activities, personnel exchanges, skills training and capacity building we wish to have firm foundation in these fields and we wish we could do more in these fields with Nigeria,” he said.