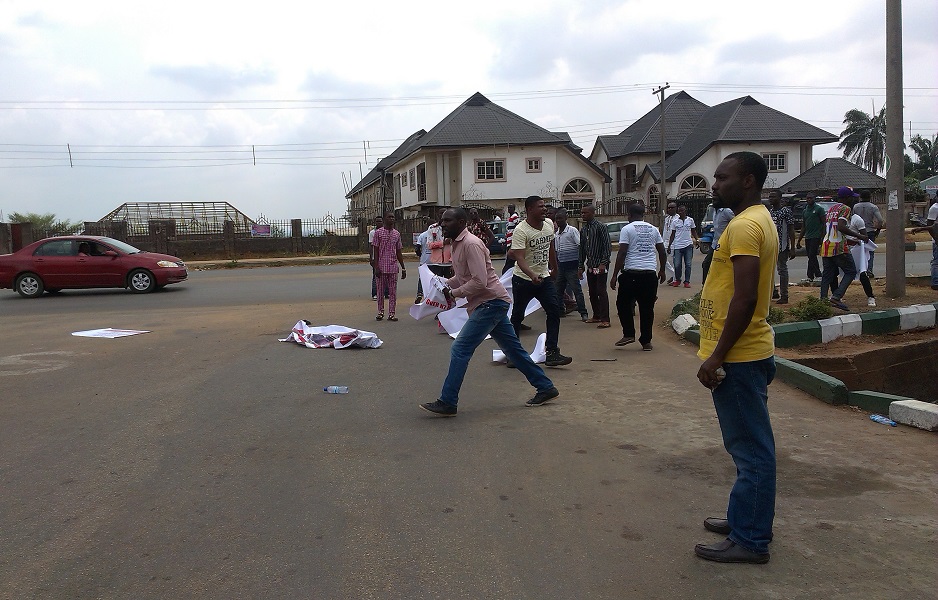 The sponsored protest against the former governor of Delta State, Dr Emmanuel Eweta Uduaghan by his successor, Dr Ifeanyi Arthur Okowa has been ruined by boys suspected to be loyalists of Uduaghan.

The unsuccessful protest which was slated to hold at the Cenotaph was co-ordinated by Okowa’s alleged unofficial media aide and an alleged serial ‘Blackmailer/Extortionist, Oghenedoro Pedro Otega alias Fejiro Oliver.

When our correspondent visited Cenotaph, the venue for the protest, over 100 heavily armed mobile policemen with over 10 Hilux Vans were stationed around the venue.

Though, Cenotaph was completely empty, Oliver, the blackmailer/extortionist seen opposite the venue surrounded by officers and another senior officer identified as Dimka and Oliver’s boys who takes instructions from him.

Some of the boys however accused the policemen of wanting to truncate the whole process.

According to them, “these policemen you are seeing here know what they are doing and I know that they have been instructed to stop this protest. Why is the Commissioner of Police, the DPO and other senior officers we have written letters to not picking their calls?

Before the venue was moved to government house, Anwai road, Oliver told journalists that Okowa’s Principal Secretary, Hillary Ibegbulem, instructed them to converge at the Cenotaph and has also instructed the police not to dare shoot anyone of the boys.

Our correspondent observed that tension gripped Okowa’s group led by Oliver following news that some persons may hijack the protest for their nefarious interest.

At the second venue in government house, 18 sitter buses number over 10 have conveyed women, girls and boys numbering 200 believed to be hired crowd gathered in front of government house carrying placards with various inscriptions where taken unaware pro-Uduaghan protesters.

Some of the placards reads: #IstandforUduaghantobejailed#, #236 billion DESOPADEC funds diverted by Uduaghan# among others.

Oliver was attacked and chased into government house while he took refuge in the policemen but the officers also could not help him as they also in turn pushed him off their protection.

With fear and tension, Oliver quickly addressed the hired crowd when they managed to recover from the disarray the pro-Uduaghan protesters kept them and managed to reconvene.

Oliver said Uduaghan should be arrested, prosecuted and if found wanting, should be jailed, “all Deltans want is justice”.

Also, some of the pro-Uduaghan protesters said Uduaghan did well while he served the state as the governor, stressing that he took the Asaba airport to an enviable level, constructed roads, paid workers salaries as at when due, accusing Okowa of sponsoring an unreasonable protest against a man who served the meritoriously.

Shortly after Oliver dispatched the hired crowd, it was alleged that the pro-Uduaghan protesters laid siege on the hired crowd who were going to receive their pay from Oliver and allegedly set one of the buses ablaze but for the quick intervention of passers-by, the fire was put off.