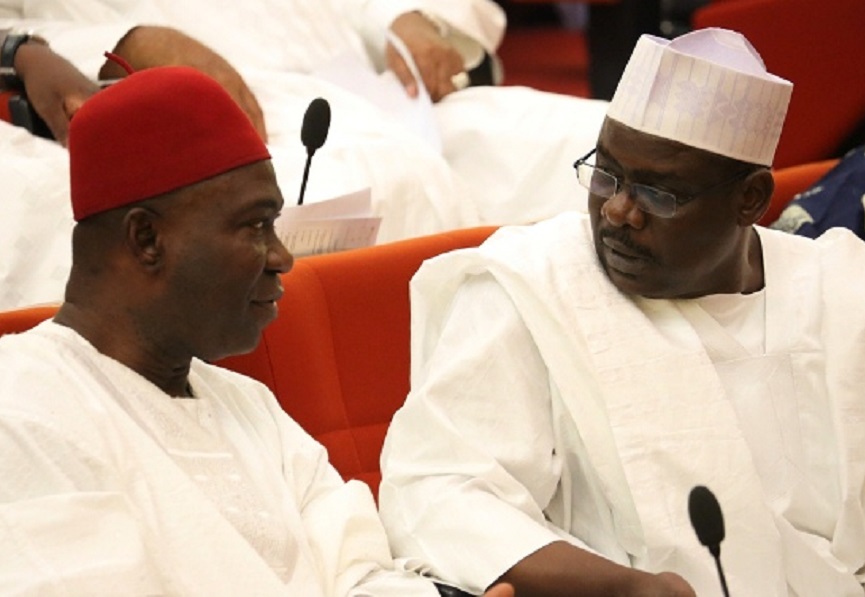 …Calls for N50,000 minimum wage, abolition of security votes
The Deputy President of the Senate, Senator Ike Ekweremadu , has called for the urgent decentralisation of the war against corruption if it must be worn and decisively
too.
This is even as he called for the decentralisation of the federal anti-graft agencies and urged the 36 states in the country, to make
conscious efforts at setting up anti-corruption agencies, so as to complement the efforts of the federal anti-corruption
agencies, in the fight against corruption.

He also called for N50,000 minimum wage and abolition of the Security Vote.
Ekweremadu spoke in Ibadan at the weekend, where he delivered the 4th National Public Service Lecture of the University of Ibadan Alumni Association, on the
theme: “Federalism and The Legal Framework for Combating Corruption in
Nigeria.”
According to the Senator, a
situation where the two major anti-corruption agencies in the country, Independent and Corrupt Practices Commission, ICPC and Economic and
Financial Crimes Commission, EFCC, does not have presence in the entire country, made the fight against corruption
ineffective.
He noted, for instance, that the ICPC had just six zonal offices and nine state offices, in addition to its headquarters in Abuja, while the EFCC had offices in only eight states, apart from its headquarters in Abuja.

Ekweremadu insisted that “these do not scratch the surface, as they are grossly
inadequate for a vast area like Nigeria and leave the agencies highly
overstretched.”

On the way forward, Ekweremadu said: “We need a
far-reaching and in-depth reorientation. Importantly, Nigeria being a
federation, the war against corruption must itself be devolved, and
federalised, not centralised as is currently the case”.

He added: “To this end, I
wish to make the following suggestions: Decentralisation of federal
anti-corruption agencies, establishment of State anti-corruption
agencies, domestication of anti-graft laws, enthronement of fiscal federalism, decentralised policing, establishment of State orientation agencies, State social
intervention/security schemes, State prisons, true economic reforms and public participation in the anti-corruption war.
“Sadly, only Kano state currently has a state agency to fight
corruption- the Kano State Public Complaint and Anti-Corruption
Commission. This should be emulated, and urgently too, if we must make a headway in the war against graft.
“Similarly, a Code of Conduct Bureau should be established in the
states with a Code of Conduct Tribunal to handle cases of civil
servants in the states and local government councils. Beside setting up such
agencies, there is also the need for the states to domesticate
auxiliary federal laws such as
the Administration of Criminal Justice Act (ACJA), Fiscal
Responsibility Act, among others, to help curb corruption. Rivers, Oyo, Anambra, Enugu, Ekiti,
Lagos, and Ondo are the only States that have so far adopted the
ACJA”.
He urged the country to discard the
current arrangement of ‘robbing Peter to pay Paul,’ to make the war against corruption more effective, since
people are more likely to show more interest in how the money they
truly worked for was being spent, than one thrown on their laps, for
doing little or nothing.

His words: “Entrenching fiscal federalism will replace the current
‘feeding bottle’ arrangement where the centre holds tightly to the
purse string and feeds the components, with a better arrangement
that is predicated on self-reliance, hard work, enterprise,
resourcefulness, ingenuity, taxation, transparency, and
accountability.

“In the various kindred/family meetings, the
illiterate farmer or palm wine tapper becomes literate when it comes
to how the fines and levies he contributed were spent because it is
the product of his sweat, not a windfall from anywhere”.

Listing the various mineral resources in the 36 States of the country, Ekweremadu noted that “The good thing is that every State of the federation is sufficiently endowed to survive from its own resources and sweat”.

He also decried a situation where the minimum wage was pegged at N18,000, while some State governors and executives could pocket as much as N2 billion under the cover of Security Vote.

“When a man who earns N18,000, cannot buy a bag of rice, how then can such a person  take care of his family? Does it make sense to him if you tell him not to find alternative means of catering to the needs of his family?

“Is it not also possible to abolish the Security Vote and replace it with Contingency Vote so it can be appropriated and accounted for”, he queried.

Ekweremadu, however, observed that “while it is easy to point accusing fingers at the governing elites in public and private sectors, we must all embark on individual soul
searching from the highest to the lowest rung of the social-economic
strata”

“From the clerks who would never be able to trace your file
unless you grease their palms, to security men who would not let you
in or claim that ‘oga no dey’ if you are not the type that parts with
‘kola’ each time you visit, the penchant for corrupt enrichment is
definitely not the exclusive malaise of the rich and influential.
“Procurement managers in public and private establishments who have mastered the art of contract inflation and over-pricing; traditional rulers who confer chieftaincy titles on known criminals and corrupt
persons; religious leaders and institutions that honour the corrupt
are also as guilty as those highly influential persons who clear
billions with a stroke of the pen or public office holders who cart
away public resources under the cover of Security Vote”, Ekweremadu declared.