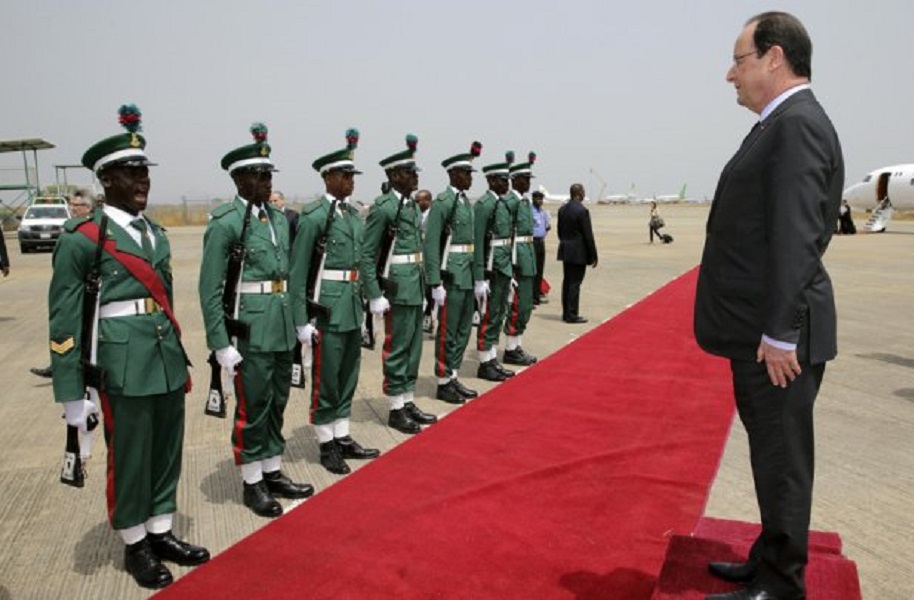 Advertisement
Nigeria has indeed seen tough times, tough times that have lasted over six years, with accompanying wanton destruction of lives and properties running into billions of naira. While it is argued in some quarters that the Boko Haram crisis has some international sponsors, I nonetheless think there is more than just foreign sponsorship of the activities of the sect.
In my opinion, there is an international conspiracy to either destroy the economy of Nigeria, or payback for constituting a hindrance to a grand plot.
As a first, Nigeria is surrounded by former French colonies, called francophone countries. These countries share borders with Nigeria, especially the Northeast, where the activities of the Boko Haram sect is domiciled. But curiously, it was observed that Boko Haram terrorist often get their supplies from these countries especially Chad and Mali. That is not the catch. The catch is that there is a strong presence of French troops stationed in these countries.
For instance, in Mali, there are over 3,000 French soldiers under the auspices of Operation Barkhane, a task force, dedicated to tracking Islamist rebels against the wider sub-Saharan area.
But this is the same Mali that hundreds of Boko Haram members stayed at training camps with Malian militants for months in Timbuktu, learning to fix Kalashnikovs and launch shoulder-fired weapons, under the full glare of Operation Barkhane. It didn’t stop there. In Chad, Operation Barkhane has 1,200 troops stationed in that country. Yet, activities of Boko Haram terrorists  and roving bands of Chadian deserters and former rebels who have made the region south of Chad their base of operations continued, all in the full glare of Operation Barkhane.
Let me digress to give some foundation for the continuous presence of French troops in its former colonies. In some quarters, it is stated that the francophone countries entered into an agreement with France to provide security against a coup. So, mainly the presence of French troops in these countries is to provide cover for their various business interests somewhat. And part of these activities is ensuring a steady supply of crude oil. But the usual cover story they would tell you is that the presence of French troops in Africa is part of a global mission to tackle militancy across Africa.
However, there have been some reactions to France’s deepening engagement in West Africa. Some people say that rather than preventing terrorists from coming to this part of the world, they attract them. According to a Chatham House expert, Paul Melly, France wields a level of influence in sub-Saharan Africa that it cannot command anywhere else in the world. Analysts used to refer to the “vested interests” that France had in West Africa in the post-colonial period, and how Nigeria constituted a stumbling block in its quest for outright dominance in Africa.
However, the odd angle to the whole counter-terrorism narrative as propagated by France is suspect. Suspect in the sense that on three occasions, France has called for a Boko Haram summit. The first was in 2014, tagged the Paris Security Summit, which saw leaders from Nigeria, Niger, Cameroon, Chad, and Benin agree to share their technical know-how with Western allies France, as well as the U.S and Britain to defeat Boko Haram. Did anything come out of the summit? The answer is a huge no. Instead, Boko Haram activities thrived, they acquired more and more sophisticated weapons that are suspected to have been moved through intermediaries from some of the neighboring countries.
In 2015, French President François Hollande offered to host a summit of countries fighting Nigeria’s Boko Haram armed Islamists on a visit to Cameroon, as a follow-up to the 2014 summit. This again didn’t yield anything tangible. In 2016, there was another summit, where leaders of Lake Chad countries along with French President Francois Hollande, US Deputy Secretary of State, Antony Blinken and British Foreign Secretary, Philip Hammond gathered in Abuja to discuss a way of defeating Boko Haram. Nothing tangible was achieved.
This is what happens when you follow the story, only to find the most cynical of intentions from every player involved, and indeed the regional politics and geopolitics of West Africa as a whole. Second is the political and economic chessboard in West Africa, where a few interested parties stand to gain from Boko Haram’s ongoing attacks and destabilization of the entire Nigerian state.  For example, Chad sees in Nigeria potential oil profits as it expands its oil extraction capabilities throughout the Chad Basin. Of course, major oil companies, not to mention powerful western nations such as France, have a vested interest in maintaining their profits from West African oil.
Today, France’s dominant role continues as its port of Le Havre is the final destination for the unrefined oil extracted from under the feet of West Africans. Are we getting somewhere? Is it now clear why French troops stationed in these francophone countries have continued to turn blind eyes while Boko Haram fighters continue to set up camps, train and launch attacks in Nigeria? Your guess is as good as mine. Like I mentioned earlier, the interest of France is the business. For them, since Chad is drilling oil from the Lake Chad basin and the final destination is Le Havre, the insurgency has to continue so the oil can continue to flow. But for how long the French deceit will last is left to be imagined.
Murphy contributed this piece from Calabar, Cross River State.