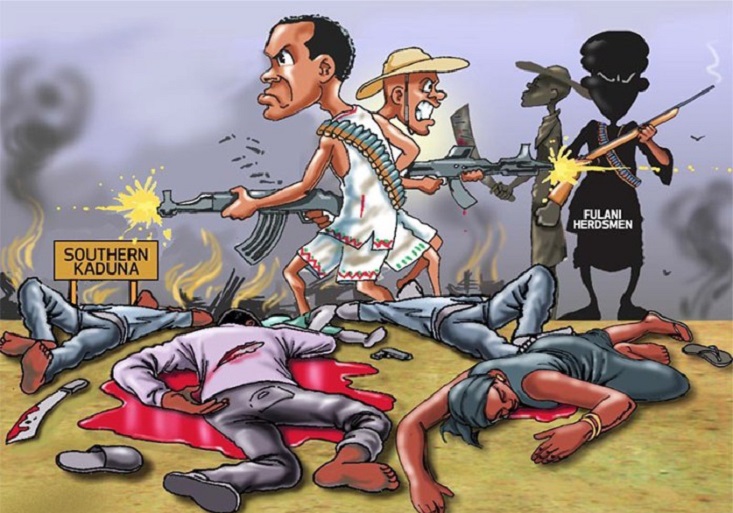 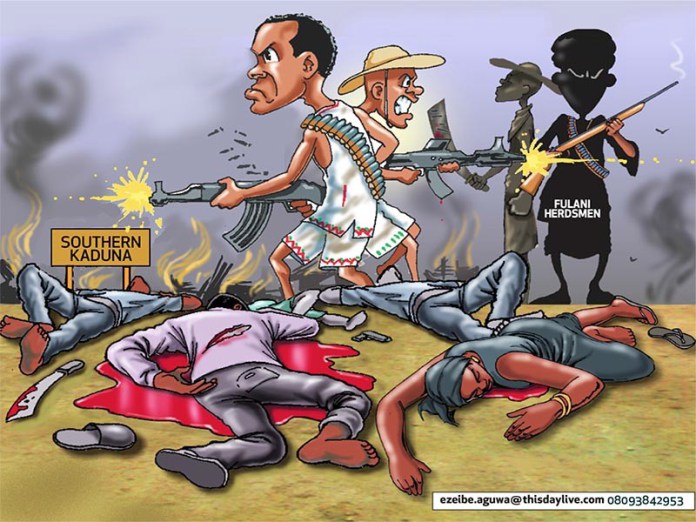 The federal and Kaduna State governments must stop the incessant attacks on Southern Kaduna and bring those behind the murderous assaults to justice, writes Vincent Obia

Last week, the dark, gloomy climate of attacks by killer herdsmen, which has unleashed a torrent of anguish on many communities across the country, came down heavily on Southern Kaduna. About 40 people were killed in Godogodo town, in Jema’ah Local Government Area, and its environs in Southern Kaduna following days of attacks by suspected Fulani herdsmen. The deadly violence has been with the people of Southern Kaduna for a long time. It seemed to recede after the ascension of Mallam Nasir el-Rufai to the governorship seat in May last year. But the violence returned last week and got even nastier.

It was awful for the people as they watched helplessly the federal and state governments’ lack of ability to stop the killings, which were said to have started penultimate Saturday and continued for about four days. In the heat of the attack by the herdsmen, an angry mob, reportedly, attacked some herders in the area on Monday, killing 14 people in the process.

The miserable climate of attacks and killings by herdsmen has refused to change, despite assurances by the authorities. Since 2010, suspected Fulani herdsmen are alleged to have burnt down over 500 houses and killed more than 4,000 people in Southern Kaduna. Things seemed to go quiet in the period following the inauguration of el-Rufai as governor, but it was just the lull before the storm. The flash of optimism disappeared in April after el-Rufai announced a controversial plan to establish grazing reserves across the state.

The federal and Kaduna State governments must rise to the occasion in Southern Kaduna. They have a fundamental duty to protect the people against the incessant attacks by herdsmen. The Nigeria Police, which is the chief internal security organ in the country, as well as the other security agencies must rise above all political, ethnic, and religious encumbrances to secure the lives and property of the people of Southern Kaduna.

As a temporary measure, and to demonstrate to the world that the lives of people in the farming communities of Southern Kaduna also matter, the federal government should set up a military taskforce to combat the so-called killer herdsmen who have terrorised the area for a long time. A similar taskforce against cattle rustlers in some parts of northern Nigeria has helped to curtail the incidence of cattle theft in the region, according to the confessions of the government and the security agencies.

In the long run, however, the Nigeria Police should be adequately equipped and devolved to perform its traditional role of maintaining internal security. State governments should be empowered to set up their own police organisations with appropriate role designations to take on the function of local policing. If the authorities had put adequate security and intelligence measures in place at the local level in Southern Kaduna, they would, certainly, have been able to deal with the crisis more effectively and even nipped the carnage in the bud.

As has been reiterated severally, the establishment of ranches by those plying the private business of cattle rearing remains the most feasible solution to the bloody clashes between crop and animal farmers in the country. Keeping the animals in ranches, where they are fed with hay and other modern feeds would not only increase their yield but also eliminate the incursions into farmlands that frequently cause the clashes with crop farmers.

The anachronistic system of herding cattle from one place to the other has caused too much bloodshed in the country to be allowed to continue. It is in urgent need of change.
The killings in Southern Kaduna, like similar carnages orchestrated by herdsmen in many other parts of the country, require urgent attention from both the federal and Kaduna State governments.

The authorities must bear in mind that their inability to resolve the fratricidal conflicts, which have flared up in many parts of the country in recent times, has hugely adverse implications for the economy and the people. A recent study by MercyCorps, a leading international organisation based in Portland, Oregon, United States of America, said violent conflicts between farmers and herdsmen in the Middle Belt region alone cost Nigeria an estimated $13.7 billion annually. This is due to destructions of crop and animal products, as well as unpaid taxes. There is also the danger of these economic conflicts transmuting into political and religious crises if allowed to fester.

The country cannot afford this, particularly, at a time when the federal and state governments are trying to boost productivity by both citizens and foreigners and steer Nigeria away from the current debilitating economic monoculture anchored on crude oil.
The climate of killings and violence is not the kind of weather in which productive investment can prosper.
–
Source: http://www.thisdaylive.com/index.php/2016/10/23/the-bloody-attack-on-southern-kaduna/