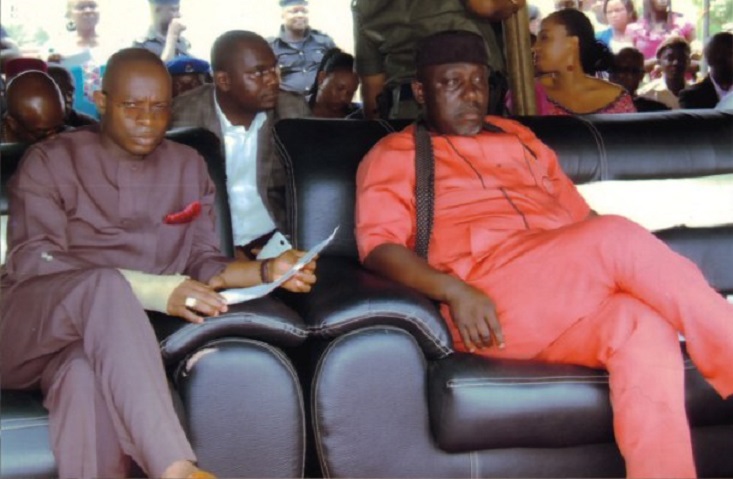 Information has emerged on how the Imo State lost a staggering N7.2 billion to a Togolese cook employed by the son-in-law and Chief of Staff to Governor Rochas Okorocha, Hon. Uche Nwosu.

According to sources, the money which comprised $4million, 3.1 million pound and more than N4 billion stashed in Nwosu’s room, was part of the federal government’s N26.5billion bailout fund given to the state government for the payment of the workers’ salaries.

Investigation revealed that the cook took advantage of Uche Nwosu’s trip abroad and swooped on the money kept in metal safe in the governor’s son-in-law’s room.

A police source also disclosed to 247ureports.com that when the state commissioner of police, Mr. Taiwo Lakanu visited the residence of the Chief of Staff at Civic Centre, a high brow area meant for only the super rich in the state, he discovered to his chagrin that high intensity equipment was used to break the room and the safe.

As a result of this, the police boss was said to have ordered the arrest of all security details, including the policemen and men of the DSS.

Already, the chief of staff has since denied that money was missing from his house, saying that his house is not a bank where money is kept.

Meanwhile, in the face of the controversy and denials by Imo state government over
the loss of N7.2 billion  to the Togolese cook, an Owerri based lawyer, Barr. Kingdom
Okere has averred that the said amount is missing, adding that three security operatives have been arresed and detained over the allegation.
Barr. Okere asserted that a police officer, Mr Gift Udenwoke and two others have been detained by the police for about a week pending when they give useful information on the whereabouts of the Togolese cook allegedly bolted away with the said money from the bedroom of the Chief of Staff’s official residence.
The lawyer disclosed that one Inspector Casmir of the Criminal Investigation department, D4 of the Imo state Police Command is the Investigating Police Officer, IPO, handling the case.

According to him, his client Gift Udenwoke serving at the New Owerri Police Station was seconded as a security operative to the private residence of the Chief of Staff, and has been in the police cell for about a week over the money carted away by the Togolese cook engaged by Hon. Nwosu.

The activist lawyer submitted that the Imo state government has taken Imolites for granted on several issues bordering on mismanaging the state resources and converting saying to family benefit.

In his words “Gift was stationed at the gate, to ward off invaders from gaining entrance into the said house of the COS, therefore cannot gain entrance into the bedroom of the Chief of Staff, insisting that there is no reason  for him to be detained for an offence which he did not commit.
The NGO boss queried, why must Hon. Nwosu’s bedroom “be a bank where the bailout fund meant for suffering Imo workers be kept ,  if not for the purpose of reportedly diverting same which is now said to be missing, one wonders if a committee needs to be constituted to pay workers who are being owed arrears of salaries because of man-made
economic problem that has made Imo a debtor State”.

He alleged that police authorities have threatened to dismiss Gift from the Nigeria Police Force for involving a human rights lawyer in the matter, saying if it happens, they will explore all legal options to address any injustice and anomaly.

Barr. Okere warned that if his client, Gift is not released in the shortest time and apologize to him, shall petition the Economic and Financial Crimes Commission, EFCC, the Independent Corrupt Practice and other related crimes Commission, ICPC, and the Inspector General of Police, IGP, to investigate the circumstances surrounding the
missing Imo bailout fund, as well as institute a law suit.

For now, unconfirmed source alleges that on the said day the Togolese cook made away with the $4million, (N5billion) the security operatives at the gate were served a meal of indomie, after which they reportedly dozed off.
It is recalled that a huge sum of money in foreign denomination was allegedly stolen from the office of the first lady following which the Police orderlies attached to her were detained, sometime ago.

Meanwhile, the workers of the Imo State House of Assembly, Imo Water Board, the judiciary, health workers have since embarked on indefinite strike following non-payment of seven months arrears of salaries. This is even as pensions have resigned to fate following the 22 months arrears of pension owed them by Governor Rochas Okorocha.